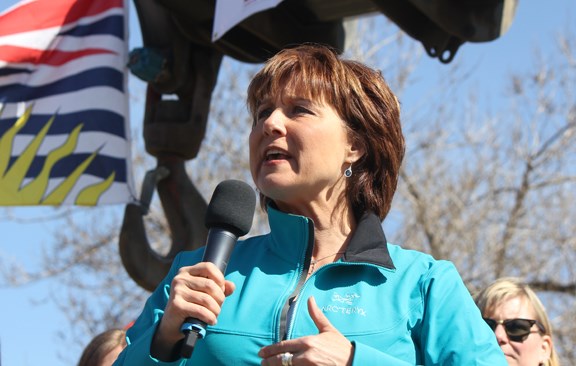 Christy Clark told a crowd in Fort St. John the LNG can help in fight against climate change, which she says contributed to a rash of wildfires in Northeast B.C. in April.Matt Preprost

The premier was in the Peace Region for a pro-LNG rally, planned weeks before a rash of wildfires forced people from their homes across northern B.C.

Asked about the early start to the fire season, Clark made a pivot to her government’s plan to export LNG to Asia.

“This early start to the fire season is alarming for everyone in the province,” Clark told reporters after a speech to LNG supporters from the back of an oilfield crane truck. “I know it’s been an immediate, urgent issue for people in the northeast, but if it’s starting this early here, it’s going to start early everywhere in the province.”

“If there’s any argument for exporting LNG and helping fight climate change, surely it is all around us when we see these fires burning out of control.”

“This is the reality we’re facing today as the planet gets warmer,” she continued, saying climate change leads to dry conditions that exacerbate wildfires. “If there’s any argument for exporting LNG and helping fight climate change, surely it is all around us when we see these fires burning out of control.”

Clark tailored her comments to the current wildfires, but the argument is far from new. The BC Liberal government has long argued that LNG is less carbon-intensive than oil and coal, making it a net-positive for emissions reduction.

Clark alluded to the Chinese government’s 2015 approval of 155 coal-fired power plants meant to meet growing demand. While those plants are still on the books, their future remains uncertain amid an economic slowdown and a shift towards renewables.

“The only way China is not going to build those filthy, belching coal plants is if they have a different fuel to power the country. That has to be LNG,” Clark said in a followup interview. “If everyone who is using coal and oil switched to natural gas today, we would be a third less polluting. In one leap.”

“If we want to be able to slow down the rate of climate change and have fewer fires or at least get stable on that front, we’re going to have to step up our efforts to fight climate change.”

‘LNG is worse than coal over the short term’

Wednesday’s rally aimed to show public support for Pacific NorthWest LNG, a multibillion-dollar liquefaction plant planned for Lelu Island near Prince Rupert. It would source gas from Progress Energy, the largest gas driller in the province and a major employer in the Peace Region.

Earlier this year, Prime Minister Justin Trudeau’s government imposed a three-month delay on the project amid growing concerns about its greenhouse gas emissions and impact on salmon habitat.

Peter McCartney, a campaigner with the Wilderness Committee, said that burned side by side, LNG is cleaner than coal.

“But to get that LNG to Asia, there’s a whole polluting process that occurs that actually means that LNG is worse than coal over the short term,” he said, citing upstream methane leaks, venting, and the burning of natural gas needed to liquefy the product.

“She’s absolutely correct that these wildfires are linked to climate change, and people are now seeing these climate change impacts in their everyday lives,” he said. “But if you were to build a new power plant in China, over the short term, it would be better to build it with coal. So this line from the government is just absurd.”

He said that while LNG is sometimes considered a “bridge” to renewable energy, it’s currently displacing wind, hydroelectric and solar in many Asian countries.