Twenty-four hours after a police shooting left a man dead outside a Dawson Creek restaurant, B.C.'s law enforcement watchdog was convinced the victim and a man who disrupted a Site C dam open house inside were one and the same. They were not.
Jul 17, 2015 8:29 PM By: Jonny Wakefield,Mike Carter 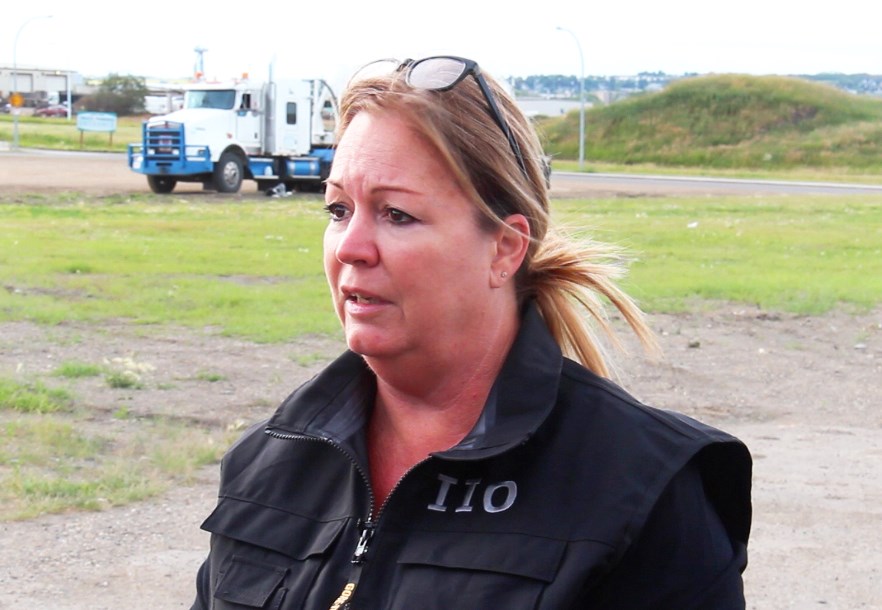 Twenty-four hours after a police shooting left a man dead outside a Dawson Creek restaurant, B.C.'s law enforcement watchdog was convinced the victim and a man who disrupted a Site C dam open house inside were one and the same.

Thursday night, the IIO and RCMP said the shooting occurred outside a public information session on the Site C dam, and that the man who was killed was "believed to be connected" to the disturbance inside.

Instead, the man who reportedly flipped tables and destroyed maps at the BC Hydro event is alive, while another is dead.

The IIO has not confirmed what the victim was doing outside the Fixx Urban Grill restaurant on the evening of July 16, but said he had a knife. Police shot the man after he acted aggressively and refused to comply with police instructions. He died shortly after.

Little is known about him, as investigators have not released his name.

As for what investigators know about the man at the Site C event: "He's alive," Kilpatrick said.

According to Kilpatrick, the Dawson Creek investigation has been one of the most complex the office has encountered since it was created in 2012.

"Since the beginning of the operations of the IIO, we've not seen a case that has quite as many moving parts as this one," she said.

"The RCMP as well as the IIO spent close to four hours last night confirming what we thought was the most relevant, most accurate information. To come speak to you now almost 24 hours later, and provide a significant change in the information is not something we typically find ourselves dealing with.

"That's a fairly substantive clarification that needed to be made."

It was a remarkable turn in a day that saw Dawson Creek and its police force thrust into the spotlight, and one of the most controversial projects in B.C. linked to a police shooting.

A day later, the hacker group Anonymous claimed one of its affiliates had been killed, based on unconfirmed reports the victim was wearing a Guy Fawkes mask and Twitter posts from an unidentified user who claimed they planned to protest the event.

At about 6:30 p.m. Thursday, police shot and killed the man outside the front door of the Fixx restaurant. Videos of the aftermath emerged online, showing officers with guns pointed at the man, who appeared to be holding a knife.

An open house about construction of the controversial $8.8-billion Site C dam was taking place in banquet facilities of the restaurant that evening.

According to an attendee, a man flipped tables and tore display boards illustrating the dam from their stands before being escorted out of the room.

Curtis Pratt was inside and said he did not hear shots, but later saw the body. He said the victim was wearing a mask, and he wasn't sure whether it was the man from inside.

Kilpatrick did not have additional information about the protestor, but said "he never did come into contact with police."

Her office is continuing to investigate the shooting. The officers involved have been sequestered, and it is not clear whether they will be charged, suspended or placed on administrative leave.

The IIO also said investigators were not sure if the officers had tasers or other lesser means of force, which will be a key part of the investigation.

"That's something our investigators have been following up on today. I don't have the answer to that," Kilpatrick said.

"What an officer carries on his tool belt varies depending on officer location, detachment and the type of work they are doing."

What is clear is that "police came in response to the disturbance and found themselves in contact with this other individual," Kilpatrick said.

The IIO is asking anyone with information about what happened in the area to come forward, saying cell phone videos are of particular interest.

“In this day of social media, we aware that there is a lot of information circulating out there,” Kilpatrick said. “We’re very interested in speaking with anyone who has information about what they saw or what they heard here last evening,” she added.

One day after the hacker group Anonymous vowed to “avenge one of our own” following the shooting, the group is claiming to have crashed parts of the RCMP website on Sunday morning.

Police have not yet confirmed whether there is a connection between the man who was shot and killed outside of a Site C open house in Dawson Creek on Thursday, and evidence on social media of a plan to disrupt the event.

Although police have confirmed the man who was shot was wearing a mask, authorities are not confirming whether it was the Guy Fawkes mask associated with the group.

“I have not had time to gather specific details from our forensic specialist with the exception that the knife was located here at the scene,” Kilpatrick said when asked about the type of mask the victim was wearing.

Anonymous has made public its intention to search for and publish private and identifying information about the officer involved, a practice it calls “doxing.”

The group has also put out a call to its members and allies to “remove the RCMP cyber infrastructure from the internet. March, create and sign petitions, hack, dox.”

The RCMP could not be reached for comment Sunday morning.

The Dawson Creek incident is the fifth police-involved shooting the IIO has investigated since April 1.

Just two days later, on July 18, RCMP in South Surrey shot and killed another man outside the Semiahmoo Library, becoming the sixth incident since April.

Dawson Creek Mayor Dale Bumstead said he was shocked and embarrassed by the shooting in his city, saying it affects the city's reputation as a clean and quiet place to live.

“At first I couldn't believe it,” Bumstead said.

“It’s [still] unbelievable to me that that can happen in our community. For me it’s just shock, sorrow and embarrassment that something like that happened [here].”

In a statement, BC Hydro said none of its employees were injured, and that they were moved to a safe location as the shooting played out.

"We are very thankful that none of our staff were directly involved," spokesman Steve Vanagas said.