Who's getting direct award contracts on Site C? 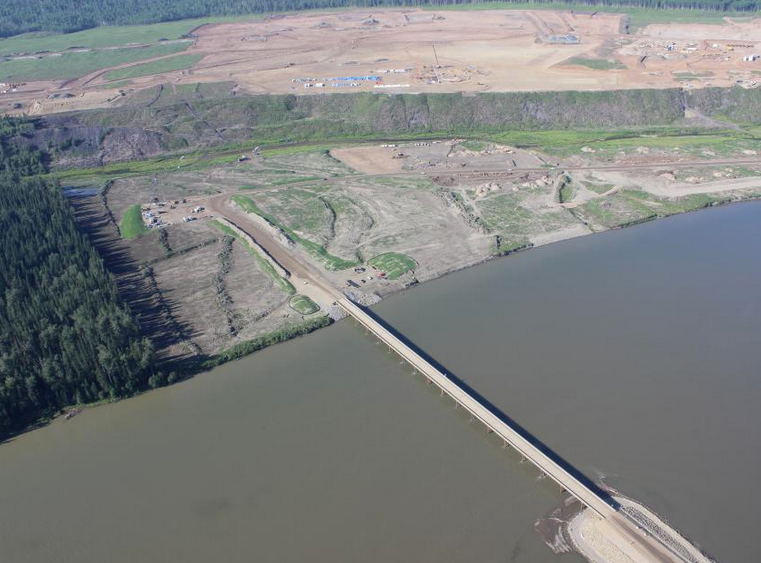 A contract to build a temporary bridge over the Peace River was direct awarded to Ruskin Construction and an Aboriginal joint venture partner for an undisclosed amount.BC Hydro photo

Twenty-eight businesses received millions of dollars in direct award contracts during the early stages of Site C dam construction, according to documents obtained by the Dawson Creek Mirror through a freedom of information request.

The businesses include Aboriginal-owned construction, reclamation and security firms; a non-profit conservation group; a major telecom and companies that have made campaign contributions to the B.C. Liberal party.

The Mirror's request, filed in April and released July 26, covered Jan. 1, 2014 to Feb. 29, 2016—from one year before the B.C. government's approval of the $8.8 billion BC Hydro dam through the first seven months of construction. The project, which recently received new construction permits from the federal government, is controversial because it will flood around 83 kilometres of the Peace River Valley and impact the Treaty rights of area First Nations.

Direct award contracts allow public agencies to select companies to carry out work without going through time-consuming tender processes. While tender policies differ depending on jurisdiction, the New West Partnership Trade Agreement between Canada's western provinces mandates that any service contract greater than $75,000 should be issued through a open tender unless a public agency can prove an urgent or specialized need.

BC Hydro has awarded around $3 billion in contracts through open public tenders.

"If you do that too often in public procurement, what you say in effect (to other companies) is there's really no point in bidding, because it's a closed shop in British Columbia," he said. "You want as many qualified bidders as possible, and it should show up in the contract awards."


Create your own infographics

Among the direct award recipients are Donald Fairbairn and Frank Margitan, who have been closely involved with other government infrastructure projects.

Margitan, previously a civil engineer with Peter Kiewit Infrastructure, was paid $336,000 for "senior advisory services"—including reviewing BC Hydro's Site C cost estimates. The contract was directly awarded due to a "need for critical expertise" and "increased project scope." According to Margitan's LinkedIn profile, he played a "significant role" in the Port Mann Highway 1 construction project, the Sea to Sky Highway and the Plutonic run-of-river power project.

Fairbairn, meanwhile, was given a $157,500 contract for "due diligence" advising on Site C due to his "critical experience." Fairbairn was previously a vice president with Terasen Gas and sat on the Capital Regional District Sewage Treatment Panel.

The companies also include seven companies that have made campaign contributions to the B.C. Liberal Party. The largest contract included on the list, valued at $900,000, went to Telus for mobile on site communications equipment.

Travis said the list of direct award contracts gives the impression of a "cosy" network in B.C.'s infrastructure procurement system.

"It becomes a bit too cozy when you see the same players, the same companies all invoicing the same client," he said, "and potentially providing that client with advice that it wants to hear—maybe not the best advice."

The names of three firms were removed for legal reasons, while dollar amounts are similarly redacted on 11 contracts—all of them Aboriginal-owned companies.

In a response letter to the Mirror's freedom of information request, BC Hydro said disclosing dollar amounts on those contracts would harm its "financial or economic interests." Several of the redactions are under review.

Travis said BC Hydro should regularly release the results of direct award contracts—which is already done in Alberta and in B.C. at the ministry level.

"When you have to go through the trouble of filing an access to information request to get this information, it causes the automatic assumption that you are trying to hide something," he said. "When you're routinely putting it out, that sort of suspicion is dissipated somewhat. You're telling people you've got nothing to hide."