The 11th annual Paddle for the Peace will take to the waters Saturday, July 9, and organizers are expecting it to be the largest yet.
Jul 7, 2016 7:07 AM By: Zoë Ducklow 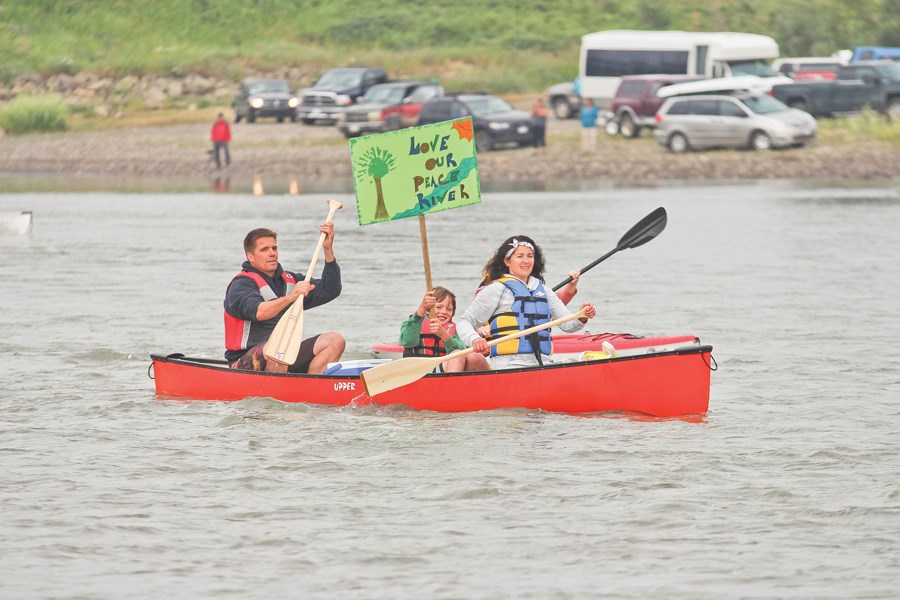 The 11th Annual Paddle for the Peace is set for July 9. - File Photo

The 11th annual Paddle for the Peace will take to the waters Saturday, July 9, and organizers are expecting it to be the largest yet.

As dam construction continues near the confluence of the Peace and Moberly Rivers, paddlers will launch from the confluence of the Halfway River at noon for a 90-minute trip down to Bear Flat. Events at Kits Beach in Vancouver, Porpoise Bay Provincial Park near Sechelt, and Lakeside Park Launch in Nelson, B.C., will take place at the same time.

Andrea Morrison with the Peace Valley Environment Association (PVEA), which organizes the paddle, believes awareness and opposition has increased across the province since construction began last summer.

“We were doing everything we could to spread the word during the environmental assessment process, and the experts said to us, ‘you watch, once construction starts, people will really start paying attention,’” she said.

“And that’s exactly what’s happened. The campaign has been growing by leaps and bounds ever since the construction started.”

Federal Green Party leader Elizabeth May is expected to attend, along with a large number of provincial NDP MLAs. Amnesty International, Greenpeace Canada, and Oxfam are on board as well.

There’s a long list of other groups involved including the interfaith community Kairos, the Council of Canadians, the Wilderness Society, Peace Valley Landowner Association and the Treaty 8 Tribal Association, among others.

While BC Hydro has obtained some permits for the dam’s construction, it’s still waiting on some federal permits to be issued. There are also two open court cases from First Nations affected by the dam, scheduled for September.

“It’s a concern that Hydro has been allowed to start construction when there are still things happening,” said PVEA President Ruth Ann Darnall.

Darnall hopes the Paddle will attract federal attention and that the government will halt the permitting process until the legal challenges are settled.

“(Site C) is not in the best interest of British Columbians,” Morrison said, noting Harry Swain, the man who chaired the joint review panel tasked with undertaking public hearings on the dam, remains unconvinced of the project’s economics.

“Harry Swain figures we can probably make back $1.1 billion of the $8.8 billion of the project. So we’re into an over $7 billion white elephant,” she said.

The Paddle launches at noon, with registration and a pancake breakfast running from 9 a.m. to 11 a.m.

BC Hydro says it is in contact with organizers regarding river flows for the day of the paddle.

"My understanding is in the past they’ve had about 400 small watercraft on the river, is that the river flow is nice and steady. So, I don’t know yet what the volume (of water) will come out at Peace Canyon will be. We’ll provide that information to them on Friday morning, and then they’ll have a flow that’s steady for the event, taking into account once it leaves Peace Canyon, there’s still Lynx Creek, Farrell Creek, the Halfway River, and Cache Creek that can all contribute flow to the Peace River that’s not within our control."

-- with files from Bronwyn Scott