The federal government has put in place stricter conditions for Americans entering Canada and heading to Alaska, but few appear to be travelling up the highway given recent numbers from local visitor centres.
Aug 6, 2020 5:26 PM By: Tom Summer 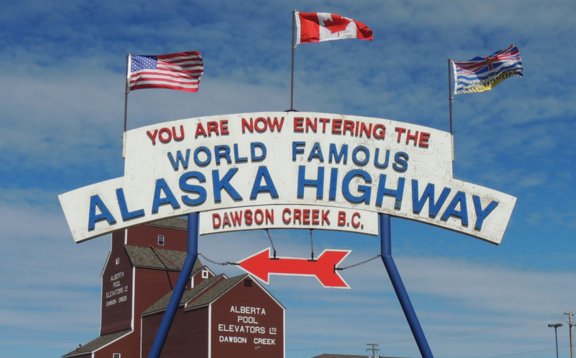 The federal government has put in place stricter conditions for Americans entering Canada and heading to Alaska, but few appear to be travelling up the highway given recent numbers from local visitor centres.

Alaska-bound travellers must now use five specific border points, three of them in B.C. at Abbotsford-Huntingdon, Kingsgate, and Osoyoos. Travellers can also enter at the North Portal crossing in Saskatchewan or the Coutts crossing in Alberta, and are to be issued a rear-view mirror tag that includes the date they must depart Canada.

At Mile Zero in Dawson Creek, there were 687 visitors recorded this past month after the visitor centre opened July 1. Only 13 identified as American.

The Fort St. John Visitor Centre reported 112 travellers after opening their doors in July, with zero identifying as American.

In Fort Nelson, 201 travellers passed through the town from April to July, with only 27 identifying as American.

While Americans are a concern for towns along the Alaska Highway, Fort Nelson Mayor Gary Foster says problems remain low in his community.

“I’ve seen Americans in our food stores, and I’ve seen them in our restaurants, which is a little concerning,” said Foster. “But by and large, most of them are abiding by the rules.”

Under the rules, American travellers are being told to stay in their vehicle as much as possible and not to make any unnecessary stops. They’re being told to pay at the pump if they need gas, or to use a drive-thru if they need food, and to generally avoid contact with others while in transit.

“Destination BC stats indicate 13 US travellers, but I’m sure that number is much higher, people were hesitant in disclosing their place of residence this year,” says Jamee Case, visitor services manager with Tourism Dawson Creek.

While in Canada, travellers are being ordered take the most direct route while avoiding all national parks, leisure sites and tourism activities. The same conditions apply to those entering from Alaska into Canada although designated entry points have not been set.

All foreigners who have COVID-19 or show signs or symptoms the virus will not be allowed entry.

Failure to comply with the current border restrictions is an offence under the Quarantine Act and could lead to up to $750,000 in fines or imprisonment up to 6 months.

“We’re mindful of this. I haven’t seen an excessive amount of abuse or flaunting of the rules,” Foster said. “But I would say that regulation without enforcement is just a suggestion.”

— with files from Jeremy Hainsworth in Vancouver