The discovery of a millennia-old UFO wreckage site in the Peace River valley is proof the region was used as an interplanetary runway, archaeologists said Saturday.
Apr 1, 2017 12:57 PM By: Preston James 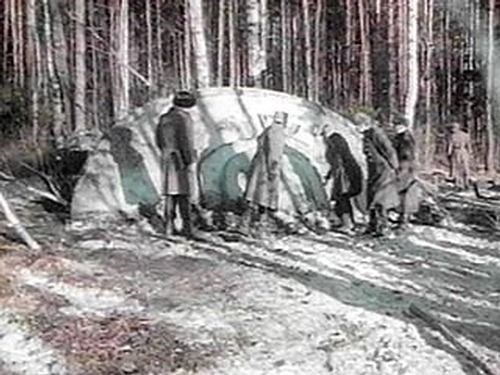 The discovery of a millennia-old UFO wreckage site in the Peace River valley is proof the region was used as an interplanetary runway, archaeologists said Saturday.

The find also raises new questions about early life in the Peace Region and the future of the controversial Site C hydroelectric project currently under construction in the valley.

Archaeologists working in the forests along the Peace River found the wreckage upstream from the Site C construction site near Bear Flat earlier this week. The area is being studied ahead of reservoir logging works. Laboratory tests confirm the metal found at the wreckage dates back at least 20,000 years, team lead Levi Lazarus said in a press conference April 1, also April Fool's Day.

"This exciting discovery raises new questions about our understanding of the history of the Peace Region," Lazarus said.

"We've always known the Peace River has been an highway for indigenous populations for centuries. What we must answer now is what interest intergalactic visitors had in the river and this region."

Lazarus said the discovery is proof the river was used, at the very least, as an interplanetary runway. He would not speculate on how the spacecraft crashed.

"A search for any life form or lifeforms at the wreckage site is underway," he said.

Previous archaeological work has uncovered hundreds of sites along the river valley filled with pieces of chert, a flaky, obsidian-like rock used by the region’s early residents for tool making. Some of the arrowheads tested positive for buffalo DNA—additional evidence that the Peace River valley was a trading hub for plains and coastal First Nations—and have been dated back 10,000 years.

Len and Marleen Bone, who have homesteaded the valley since the 1940s and are ardent opponents of the Site C project, said the out-of-this-world discovery is further proof that the Peace River should be given protected status and called again for the immediate halt to the dam's construction.

"We call on the premier and her energy minister to finally do the right thing," said Len Bone.

"It's one thing to run roughshod over our fellow First Nations brethren and homesteaders, however, it's another matter entirely to do the same now to interplanetary pilgrims."

Officials with the Planetary Peace Commission, based in Dawson Creek, said the aliens likely came to the region to escape religious persecution on their home planet, and because of the valley's rich agricultural capabilities.

"We've known about the existence of foreign life forms in this region for decades," said PCC President Herb Wilde said.

BC Hydra, which is undertaking construction of the $9-billion Site C project, say it is working with the local museum in Fort St. John to preserve and display the alien artifacts once quarantined and researched.

"We are as surprised and delighted as everyone about this find," said Site C spokesperson Dan Calloway. "However, it will not slow down our construction timetable. The project remains on-time and on-budget."

Premier Chrystal Lark and Energy Minister Bull Bettenn could not be immediately reached for comment.

A team of researchers from Roswell, accompanied by Canadian military personnel and local archaeologists, will continue their work over the coming months. Lazarus did not want to weigh in on the political implications of the discovery. However, he hopes the site will open to the public later this summer.

"We are just getting started," Lazarus said. "The truth is out there."