It was a snowy weekend in Fort St. John and there's a new record to prove it. According to Environment Canada, a total of 17 centimetres of the white stuff blanketed the city over the weekend, with a record 9.
Mar 8, 2016 2:48 PM By: Bronwyn Scott 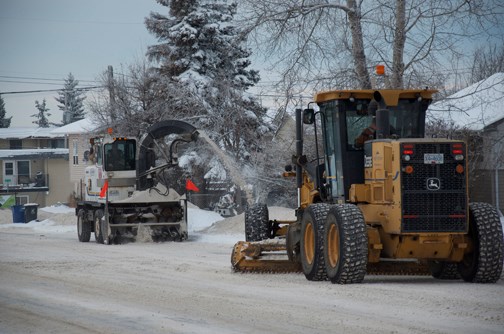 It was a snowy weekend in Fort St. John and there's a new record to prove it.

According to Environment Canada, a total of 17 centimetres of the white stuff blanketed the city over the weekend, with a record 9.8 centimetres falling on Sunday on top of the seven centimetres that fell on Saturday.

Dawson Creek had only a light dusting of snow on Saturday, but saw 6.5 centimetres fall down on Sunday.

“It was a good little arctic front that passed over you guys,” said Matt MacDonald, meteorologist with Environment Canada.

“It’s been not the snowiest of winters up there, and, as I always caution people, March typically comes in like a lion, and I think it was a perfect example,” he said.

The previous snowfall record for March 6 in Fort St. John was 6.6 centimetres in 1966.

Warmer temperatures are in the forecast for the rest of the week, with a high temperature of 7 C forecasted for Wednesday in Fort St. John. The normal high for this time of year is - 1 C, MacDonald said.

“So that’s a good seven, eight degrees warmer than normal,” he said.

It’s typical of what we’ve seen this winter – “It’s been very mild, been one of the mildest winters on record, and that’s all owing to good old El Nino,” he said.

El Nino, characterized by warmer than usual water temperatures in the equatorial Pacific, peaked at the end of January and is now decreasing in intensity, which is typical for the weather phenomenon.

“It usually reaches its strongest values towards the end of January, and climate models have all been in really good agreement suggesting that we return to neutral conditions by about May,” MacDonald said.

In terms of what to expect for spring, the trend of warmer conditions will continue, despite El Nino weakening – “It’s still there,” MacDonald said.

“The warm air is here to stay ... I think the beginning of summer we can expect closer to normal conditions, so by the time El Nino fizzles out, we could expect normal conditions for the month of May and June.”

While we’ve appreciated a mild, low-snowfall winter in the Peace, we’re in store for a colder, snowier fall and winter next year with La Nina, El Nino’s opposite, making a comeback for winter 2016-17.