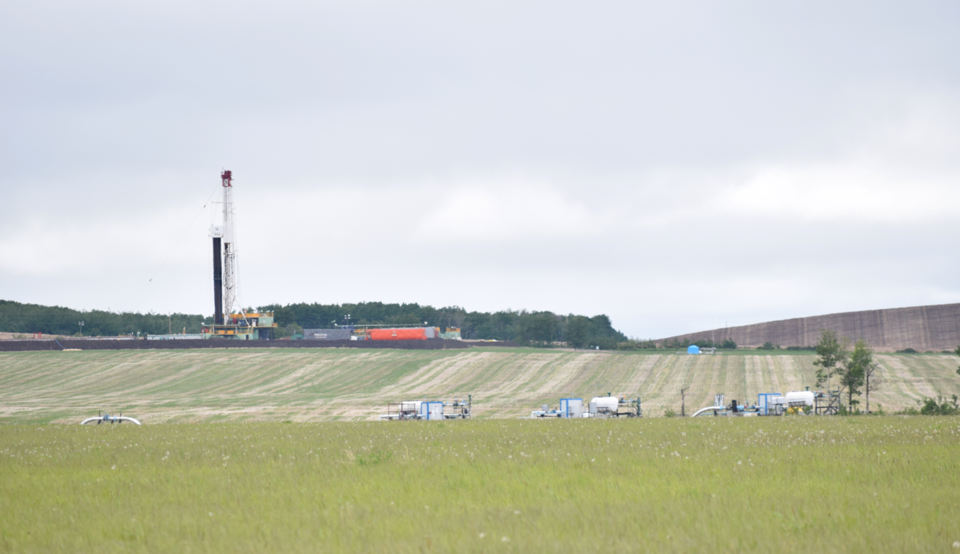 A drilling rig near Rolla.

The year just passed was one of the worst in decades for Canada’s oil and gas sector.

The Petroleum Services Association of Canada reckons the 3,100 oil and gas wells that were estimated to have been drilled in Canada in 2020 was the lowest since 1972, thanks to the pandemic and low oil prices.

But at least one company, Tourmaline Oil Corp. (TSX:TOU), which is one of the biggest operators in B.C. Montney region, managed to keep busy in 2020. In B.C., the number of new natural gas wells drilled in 2020 was just slightly higher than in 2019, according to the BC Oil and Gas Commission.

“We had no layoffs, and we were employing a lot of service sector employees back in the basin, as we call it, in the smaller towns like Dawson Creek and Fort St. John and Hinton and Edson,” Tourmaline CEO Mike Rose said Thursday in a session on the upstream oil and gas sector at the BC Natural Resources Forum.

Tourmaline Oil has three main operations – two in Alberta and one in B.C. in the Montney formation, which straddles the B.C.-Alberta border.

Tourmaline has invested more than $2 billion in B.C. since 2013, and a total of $8 billion over the past 25 years. It currently has 276 wells and five processing plants in northeastern B.C.

“Over the next five years, current plans are to invest $2.5 billion in the province of British Columbia,” Rose said.

What makes the Montney region of northeastern B.C. so attractive for oil and gas producers – apart from its sheer size -- is that it is rich in liquids, like condensate (used to dilute Alberta bitumen), propane and butane.

The abundance of those liquids has driven Alberta companies to invest billions in B.C. over the past decade. It is also driving investment on the West Coast.

And, of course, all that “dry” gas that is the byproduct of natural gas liquids production in B.C. will also soon have a new market in Asia, in the form of liquefied natural gas. The $40 billion investment being made by LNG Canada is the largest private investment ever made in Canada to date.

Because of the sheer size of the Montney play, and its ability to produce or supply such a diverse range of products (natural gas for domestic use, LNG and propane for export, and condensate for the oil sands) it is expected to continue to draw billions in investment in the coming years, even as investment falls in other oil and gas producing regions.

A recent Canadian Energy Regulator (CER) forecast suggests that Canadian natural gas producers will continue to have good prospects, even in an increasingly carbon constrained world.

In fact, the shift away from coal and oil is expected to increase the global demand for natural gas, since it is the lower-carbon energy source of choice for the firm power needed to backstop intermittent wind and solar power.

The fundamentals for B.C. appear to be particularly compelling. Not only is the Montney region prolific, the natural gas and LNG produced in B.C. has a comparatively low carbon intensity, which may give it a premium.

The CER used two scenarios in its modelling, including one in which Canada and other countries increased efforts to decarbonize and shift away from oil.

“Under both scenarios, B.C. continues to have strong natural gas production growth and will, in fact, become the largest natural gas producer in Canada by 2040,” said Gitane De Silva, the CER’s chief executive officer.

Alberta is currently the largest natural gas producer in Canada.

“Our projections see B.C. natural gas production being driven by liquids production, as well as LNG export assumptions,” De Silva said. “So we see natural gas as extremely important to Canada's economic energy recovery, and it will only increase in importance over the next 30 years.”

Timothy Egan, president of the Canadian Gas Association, said his association has forwarded a list 70 natural gas related projects, worth a total of $12 billion, to the federal government that are “shovel-ready projects that could help trigger fast economic returns.”

Canadian producers say natural gas and LNG from B.C. should command a green premium, since it has a lower carbon intensity.

For one thing, regulations in B.C. limit the use of flaring and venting, and it is implementing regulations to further reduce methane emissions from production by 45%.

The BC government has been investing in new transmission lines to deliver power to northeastern B.C., which has allowed natural gas plants and pipelines that would otherwise burn natural gas to convert to clean hydro power.

And companies like Shell Canada have taken an approach to building pipelines and drilling wells that also avoids emissions.

“We pre-build our pipelines,” said Kim Code, vice president of upstream operations for Shell Canada. ”That reduces the flaring that would otherwise have happened.”

Shell Canada also uses recycled water for its fracking operations, which is delivered from – and returned to -- holding ponds via water pipelines, which reduces the use of trucks.

“Because we also pre-build our water pipelines, that also means that, whereas … if we didn't have pipelines built, we would have trucks on the road,” Code said.

“Our entire field is pipeline connected, taking all the water trucks off the road,” said Donna Phillips, executive vice president of corporate development for Pacific Canbriam.

In 2020, 100% of the water used in Pacific Canbriam’s fracking operations was recycled, Phillips said.

Between 2013 and 2018, Tourmaline has reduced the CO2 intensity of its operations by 46%, Rose said, and has plans for further reductions in both CO2 and methane from its operations over the next five years.

“Our goal is a 25% further reduction over those next five years,” he said.

One area the company is now focusing on is converting all of its drill rigs and completion operations from diesel to natural gas, which will achieve further reductions, both in emissions and costs.

“It generates a meaningful CO2 reduction, as well as associated compounds that are created when you burn diesel, but also reduces our costs, after we pay out our capital investments,” Rose said. “So shareholders get a double win. They get a net cleaner methane molecule and they get a more profitable company.”

He added that if the whole sector converted from diesel to natural gas, the emissions reductions would be “enormous.”

“Any worldwide demand projection that you look at -- even those with the most aggressive renewables build out -- natural gas is the largest component of the energy stack for several decades to come,” Rose said.

“It's also the most affordable in that energy stack. For Canada, with its ever cleaner methane molecules, we should be providing as much of the world's growing (natural) gas requirements as possible.”