Developer says he wants to maximize his land, notes proximity to already busy highway
Oct 2, 2015 9:25 AM By: William Stodalka 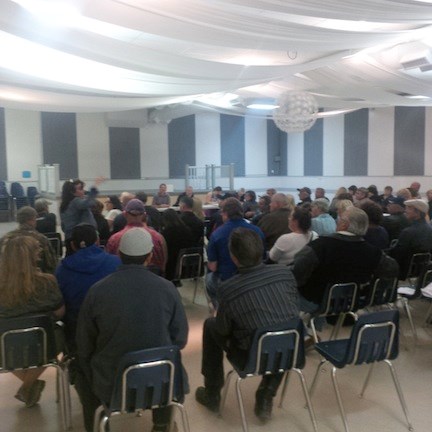 About 90 residents showed up at the Charlie Lake Community Hall Wednesday night to express their opposition to a proposed multi-family development within their community. William Stodalka Photo


Charlie Lake residents appeared unanimous in their opposition to a proposed multi-family development at a public meeting Wednesday night, and left with more questions than answers after the developer failed to show.

“I think (the proposal) should be shot down just for that,” said one attendee, Daryl Stark.

“How can we get information if (the developers) haven’t showed up?”

Developer Logan Hodson said Thursday he wasn't informed the meeting was set to take place, and believed it was scheduled for Oct. 5.

Even had Hodson appeared at the Charlie Lake Community Hall, he would have still faced about 90 people who do not want his proposal to go through.

Hodson wants to build 17 rental units in Charlie Lake along the Alaska Highway, spread out in a mix of one duplex, one triplex, and three four-plexes, according to information from the Peace River Regional District. The development would add up to 50 people and 34 vehicles to the area.

Hodson is looking to build the units to accommodate growth coming from the Site C dam, but Hodson also believes there is a need for this type of housing in the area.

"We're builders, and we want to build our own rental property," Hodson told the Alaska Highway News.

“So, we just bought this property, and, of course, we wanted to maximize the number of rentals we could build on it so we don’t have to keep moving and buying new properties.”

"The increase in traffic to that road (used by local children riding bicycles and walking to their bus stops or down to the lake in the summer) would be exponential," wrote Charlie Lake residents Mark and Sara Richardson in a letter about the project.

"Especially for the residents in close proximity to this proposed project, it is upsetting and unfair to then change the zoning and nature of their neighbourhood,” Petrucci wrote.

Others don’t like the ideas of renters in their community.

“Most renters do not care about their surroundings, or those around them,” one letter coming from the Banks family said.

Hodson said his proposal won't have "a huge impact" on nearby residents.

"I think that the development, it would be good for people," he said.

If approved, the development would require new water cisterns to provide enough water to put out a potential fire, Hodson said. This additional water would help drive down insurance costs for nearby homeowners.

Asked about the potential traffic impact, Hodson noted the development would bring more traffic, but that the area sees quite a bit of traffic as his development is located alongside the Alaska Highway.

Residents were also concerned that work on the site had already begun before the public hearing process was over.

Bruce Simard, general manager of development services for the PRRD, said a resident notified the district last week  that holes had been dug on the property, and form-work to hold concrete had started. No concrete had been poured, but it was still done without a building permit, and a stop work order was issued, which Hodson complied with.

"We thought that we could build a duplex there while we were going through that rezoning process, so that's why we started," Hodson said. "It was a mistake on our part."

Hodson also disputed whether or not a stop work order was issued, and said that he complied voluntarily.

The proposal's future is still undetermined. It must now go back to PRRD directors for a third reading and final vote, where it may be approved or rejected.

A report will be presented to area directors, which will include comments from the public hearing.

This type of development is still very new to the PRRD, but not unprecedented.

Last year, a six-unit apartment complex was built in another part of Charlie Lake. Simard said that development did not face a similar level of public controversy.