They camped through a hailstorm on Bear Flat, learned the basics of smudging, and the surprisingly difficult process of taking down a teepee.

Renee Simard frequently interacts with First Nations people with her work at the Ministry of Aboriginal Relations and Reconciliation (MARR).

“I felt there was a serious lack of any kind of training directly related with First Nations. I was the First Nations relations advisor and yet didn’t know the protocols and traditions,” Simard said. “I felt that was important for us to learn, especially if we’re trying to move toward reconciliation.”

She proposed the camp through a staff-directed training program that lets staff get training they feel is relevant to their jobs. The seventeen other people who signed up were mostly from the Ministry of Forests Lands and Natural Resource Operations (FLNRO) based in Dawson Creek, with some from the Ministry of Environment and MARR. The camp was facilitated by Treaty 8 Tribal Association.

“It was about creating connectedness between their communities and ours because we work so closely with them. Most of their traditions are oral, so you can’t just go to books and find this information, so you have to learn it first-hand,” Simard said. “I think it will give people a deeper appreciation for who’s being affected by the different permits and stuff that we’re issuing.”

The camp is part of a cultural employment strategy that the Treaty 8 Tribal Association has been working on with federal funding. Karen Aird is a consultant who’s worked closely on the strategy, and organized this camp. It isn’t just for industry or government partners, she said, it’s also for members of Treaty 8 tribes.

“We’re hoping to reinvigorate and bring back some of the teachings, especially to some of the younger people. We want to get them out here doing the same stuff,” Aird said.

Near the end of the second day, educator and faith-keeper Art Napoleon led a session about First Nations protocols. Everyone sat inside the teepee while a low fire smoked away in the centre. He talked about smudging, which commonly happens at the beginning of any ceremony.

“Inhaling it does not get you high,” he joked, as another facilitator went around the circle with a small pan of smoking sage for everyone to wash the smoke over them. “Symbolically, you’re washing yourself with the smoke, but you’re also uniting body, mind, spirit.”

Not all traditions are as commonly known and practiced as smudging.

“Protocols vary from tribe to tribe,” Napoleon said. “With colonization, some of us lost them for a while.”

He tells of old pipe bearers and ceremony keepers, who, according to legend, buried their pipes on the hills overlooking the Moberly, saying they needed to put them to rest.

“There was a lot of pressure from the Catholic church. In other places, these healers were branded as practicing black magic and turned their communities against them. On the prairies, a lot of them went underground. So that’s where some of us went back, to learn from the elders who were practicing those ways. But even then, the ceremonies have been influenced. What you see today is not exactly what existed a long time ago. You’ll see little bits of Christian influence, even a little bit of pan-Indianism. It’s not all pure. We were severely impacted.” 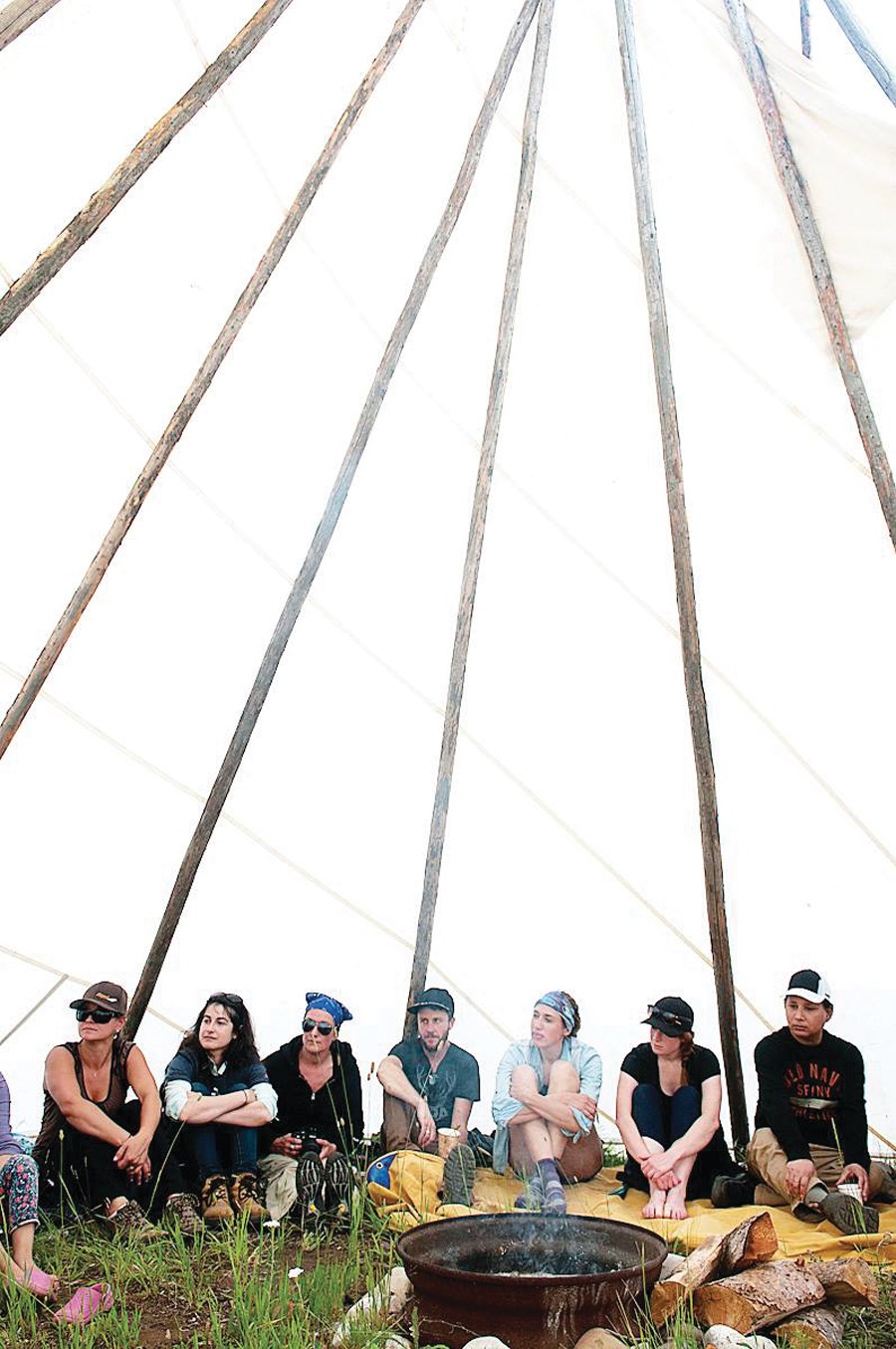 An important part of this camp is talking about relationship between the First Nations and industry. Napoleon grew up at Saulteau and has been involved in land use negotiations and cultural preservation for a long time. Through the years he’s seen a shift from focusing on mitigation and habitat protection to jobs and financial benefit.

“There was a time when consultation to us meant an opportunity for co-stewardship. So it would allow us to be part of the design of any socio-cultural impact, land-use studies, environmental impact assessments,” Napoleon said.

“These are the things we should be focusing on as stewards of the land. Then if there’s still work, that’s an add on. Now it’s become the other way around.”

Tammy Watson was in a unique position at the camp, being both a Saulteau member and a government worker. She’s been working with FLNRO for a few months as the First Nations advisor on crown land applications.

“My coworkers get confused sometimes because I say ‘we’ when I’m taking about the First Nations and the government,” she said with a laugh.

Watson was nervous to work for government initially, wondering if people would question her credibility, but ultimately wanted to be part of the change.

At the end of the camp, everyone had a turn to stand in front of their peers and share a resolution or a reflection.

“I’m going to do dishes when I go to communities,” one staffer said, referring to Aird’s encouragement that people involve themselves at First Nations events.

“I used to hesitate to be myself, but I’m just going to barge in and be myself.”

“Twenty-one years ago, this would not have happened. It means so much to see how earnest you all are to learn these things,” Aird said, reflecting on the history of First Nations consultation with government. “Now is the time for change. I’m positive that things are changing.”