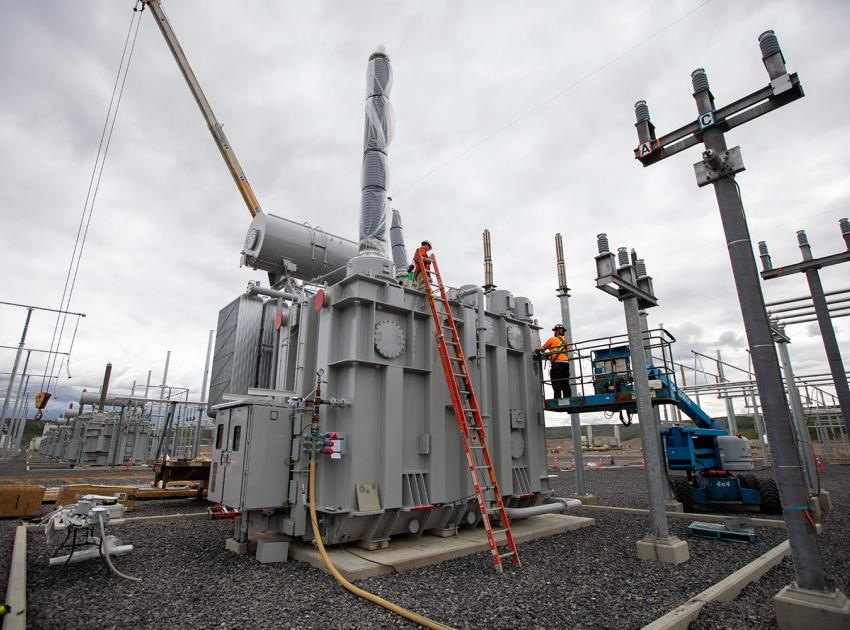 Workers connect a transformer for the Peace Region Electrical Supply system located at the Site C substation, June 2020.BC Hydro

While the big energy story of 2022 will likely be the completion of the $12.6-billion Trans Mountain pipeline expansion, B.C.’s economy will also be benefitting from the construction of three other energy megaprojects – the $17-billion LNG Canada plant in Kitimat, the associated $6.6-billion Coastal GasLink pipeline, and the $10.7-billion Site C dam.

By 2022, BC Hydro also hopes to have completed the $280-million Peace River Electricity Supply project – construction of which is underway – that will link the LNG Canada and Site C dam projects by providing clean power to natural gas producers supplying the new liquefied natural gas plant in Kitimat. The idea there is to lower the greenhouse gas emissions intensity of LNG produced in B.C. by electrifying the upstream.

These big energy projects are already employing thousands of workers. There are about 1,600 people employed right now in Kitimat at the LNG Canada project. The workforce is expected to peak at about 4,500 throughout 2022 and 2023.

LNG Canada and its main contractors have already awarded about $2 billion in contracts to B.C. businesses and contractors, many of them First Nation businesses, said Susannah Pierce, director of corporate affairs for LNG Canada.

Close to 600 workers are employed on the associated Coastal GasLink pipeline, which is expected to have peak employment of 2,500, with completion slated for 2023.

Meanwhile, Site C dam employs just over 3,200 workers, but typical pre-pandemic workforce numbers for the project were around 4,000. It is slated for commissioning in 2024. The Site C dam project’s contribution to B.C.’s GDP has been estimated at $3.2 billion.

The $17 billion LNG Canada project’s economic impact in B.C. has been estimated by Central 1 Credit Union at 0.3% to 0.5% of B.C.’s total GDP. Once in operation, it is expected to increase revenues of natural gas producers by $5.8 billion, compared to what they earn through domestic sales and exports to the U.S.

To date, the LNG Canada site in Kitimat has been cleared and prepared, a workers village called Cedar Valley Lodge is being built to accommodate 1,500 workers and a major reconfiguration of marine terminals is underway.

By 2022, the Cedar Valley Lodge will be expanded to accommodate up to 4,500 workers, and the company expects the large LNG modules being built in Asia will start arriving around the same time.

The next two years will see the site become a beehive of activity, with the building of the LNG plant itself. The biggest challenge in 2022 may be finding enough qualified workers for all the big projects being built.

LNG Canada, Coastal GasLink and Site C dam alone will employ roughly 11,500 workers at peak construction. BuildForce Canada estimated that 13,000 new jobs would be added in B.C. in 2021, with LNG Canada and Site C dam being major drivers, although it also included projects like the Pattullo Bridge replacement project.

“Right now there’s competition for B.C. labour, and I can imagine into the future there will continue to be that competition for B.C. labour, and that’s something we’re very mindful of,” Pierce said. “It’s not necessarily a bad problem to have, if you’re looking at [making] sure that folks who are in the trades are employed in B.C., because there’s going to be lots of demand.

“We’re pulling people from all over the province to work on this project, as are the other ones, I’m sure. As we start to look at the onsite construction, there’s also going to be opportunity for workers as well as potential suppliers from all across the province.”