Former opposition leader Adrian Dix says a trio of power lines, including a recently-completed project near Dawson Creek, are examples of BC Hydro "chasing customers" for the Site C dam.
Jan 22, 2016 9:06 AM By: Jonny Wakefield 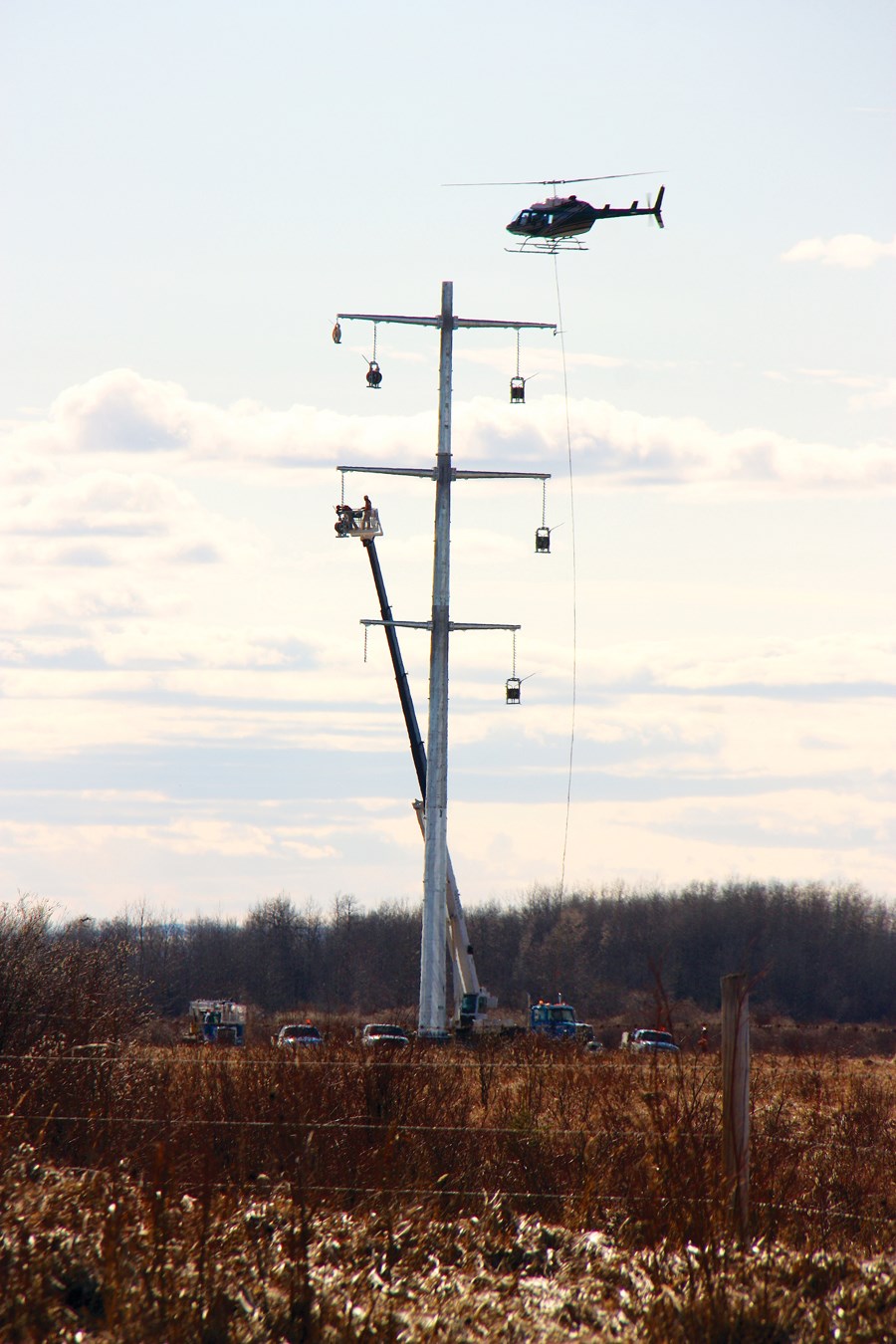 More than 11,000 residential, commercial and industrial users are connected to the new DCAT transmission line, BC Hydro says. But the province's energy critic, Adrian Dix, is critical of the utility's approach of building new transmission lines.Mike Carter

Former opposition leader Adrian Dix says a trio of power lines, including a recently-completed project near Dawson Creek, are examples of BC Hydro "chasing customers" for the Site C dam.

But Dix — the premier-apparent before the BC NDP's disastrous 2013 election finish who now serves as the party's energy critic — says the project and others like it are "effectively subsidies" for industry.

"Obviously, it's BC Hydro spending more money to create a market for Site C power, which doesn't otherwise exist," Dix argued in an interview with the Alaska Highway News.

The $296-million DCAT line, initially budgeted at $257-million, was energized in November.

It was built to service what Hydro calls some of the "most dramatic" single industry regional load growth seen in the past 50 years, mostly from upstream natural gas production.

DCAT and two other projects aim to connect producers to the BC Hydro grid, which is powered primarily by hydroelectric energy. Most producers now use natural gas to power compressors, fracking operations and other equipment, meaning the transmission projects would prevent the burning of millions of tonnes of greenhouse gases.

Despite a downturn in drilling in the area with the fall of natural gas prices, McDonald said the project is still "desperately needed" and has 11,000 residential, domestic and industrial customers.

Over the next decade, Hydro expects the South Peace will see energy demand grow at a rate "10 times the rest of the province," driven mostly by industry.

"We have very strong indications from oil and gas companies, that actually make the financial commitments, (on) connecting into the line in the future."

According to a 2012 filing with the B.C. Utilities Commission (BCUC), the independent BC Hydro watchdog, the utility collected financial securities from industrial customers to cover roughly 60 per cent of the cost of the DCAT.

Encana Corp., which is taking around half the share of industrial power from the line, says electrification will cut an annual 860,000 tonnes of greenhouse gases that would otherwise be produced.

Plugging into DCAT is also a more reliable source of electricity, according to Encana vice president Richard Dunn, one that produces less noise than gas generators.

DCAT is closely associated with two other proposed transmission lines. One BC Hydro project, the Peace Region Electricity Supply, would increase the flow of power to DCAT. While the exact route of the line has not been determined, it could connect to Site C, rather than the W.A.C. Bennett dam. The line is still in the planning stages and has not been approved.

Another, proposed by ATCO Power, would plug Progress Energy drillers in the North Peace into the Bennett dam. Progress Energy is a subsidiary of Petronas, which is seeking to build a multi-billion dollar liquefied natural gas facility in Prince Rupert.

Energy Minister Bill Bennett suggested the two projects might be exempted from review by the utilities commission. The commission was not asked to review Site C, a move opponents of the project have criticized. However, the  BCUC did approve DCAT.

"If it is determined there are enough customers, and these gas companies will actually electrify their operations...that is a pretty significant benefit to British Columbians," Bennett said.

"If from that we feel that the only way to get the lines built on time for those customers is to direct that the lines be built, that's what we'll do. But we're in process—we're not sure what we're going to do on that yet."

Dix was critical of that approach saying "by building more transmission, also at significant public cost... BC Hydro is effectively chasing customers for Site C."

"This year, domestic demand, contrary to BC Hydro's growth estimates, went down, actually went down, by a fairly significant margin."

As for the potential sidelining of the BCUC, Dix said it went against previous government statements on the commission's role.

"BC Hydro may say it's legitimate for us, for all kinds of reasons, to provide such a subsidy (for industry). But what isn't legitimate is telling people you're going to have an opportunity to ask these questions before the BCUC and then breaking your word."