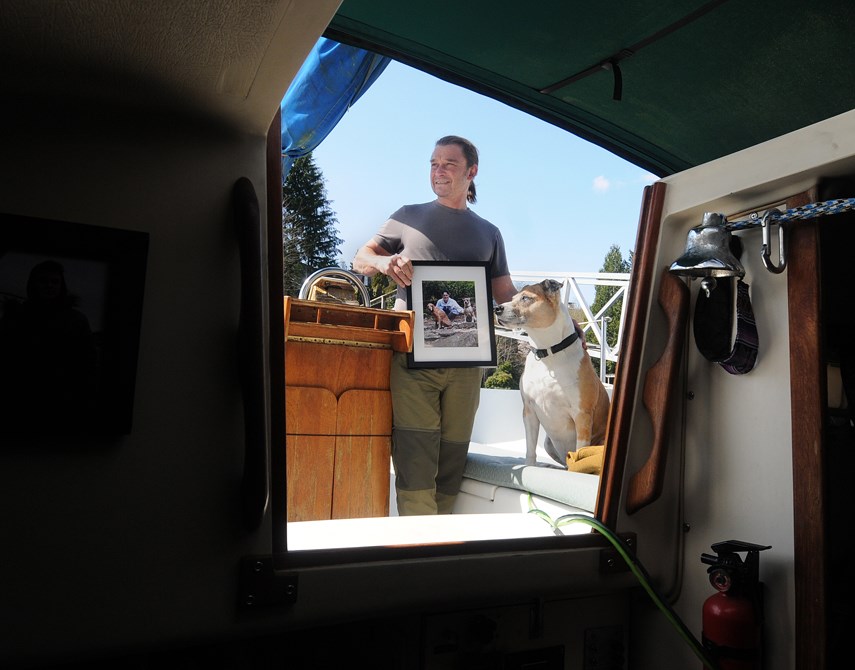 Matthew Witt and Rio on their family sailboat. Matthew holds a photo of his Son Sebastian, who died in 2015 of an fentanyl overdose.Mike Wakefield, North Shore News

As British Columbia moves forward on drug decriminalization, a bereaved North Shore father who has been advocating for the change says he welcomes the decision but believes it’s “way overdue.”

“It has taken way too many deaths, destroyed families, and five long years for this to happen,” Matthew Witt said.

Witt shared how his son died after taking a toxic supply of fentanyl in the lead up to B.C.'s five-year overdose crisis anniversary on April 14, in a bid to advocate for policy change and to help shake the negative stigma surrounding drug addiction.

Since the crisis was declared by Dr. Perry Kendall, there have been more than 7,000 illicit drug toxicity deaths in B.C. In 2020, the toxic drug supply claimed more lives than ever before in the province’s history, with 1,724 deaths. Things have not improved this year. In February, there were more than five deaths per day.

To mark the anniversary, both the province and the federal government announced they would bolster their efforts to turn the tide on the heartbreaking crisis, which has worsened during the COVID-19 pandemic, by taking further actions and contributing extra funds to support services.

To address stigma, Sheila Malcolmson, Minister of Mental Health and Addictions, announced B.C. will officially request a federal exemption from Health Canada to decriminalize personal possession of drugs in the province.

"Through provincewide decriminalization, we can reduce the fear and shame that keep people silent about their drug use, and support people to reach out for help, life-saving supports and treatment,” she said.

Witt’s son Sebastian had been clean for over a year before he died, after having a relapse at age 20 on May 18, 2015. Witt strongly believes the shame surrounding addiction hindered his son from asking for help when he needed it most.

“Ending the criminalization of simple drug possession will potentially save countless lives,” Witt said.  “People will no longer feel the need to conceal their addiction and drug use from family and friends; they will not be compelled to use alone out of shame and fear of repercussions.

“If even one child feels safe enough and is prompted by this policy change to say, ‘Mom, I need help.’ It will have saved a life.

“This policy will not end the overdose epidemic, but it will reduce the number of deaths. What can be more important than that?”

Malcolmson said decriminalization is one additional tool in B.C.'s accelerated overdose response plan that also includes harm reduction, prevention, treatment and recovery while building a system of mental health and substance use care.  She highlighted that since 2018, more than 6,000 deaths have been averted in B.C. because of the life-saving interventions.

The province also announced a $45-million investment over the next three years to secure expanded overdose prevention services.

Witt has been focused on advocacy work ever since he lost his son, joining Moms Stop The Harm, a nationwide network that's been lobbying the federal government to declare the opioid overdose crisis a national public health emergency. The group also wants the feds to develop a plan that looks at decriminalization and the legal regulation of drugs.

While all of the group's calls haven’t been answered yet, on April 15, Patty Hajdu, Federal Minister of Health, announced nearly $1.7 million in funding for projects led by the Community Addictions Peer Support Association and MSTH to help organizations to take action against stigma related to substance use and to support families trying to help loved ones living with addiction or who have lost someone to overdose.

MSTH will receive $344,935 over 26 months to establish a network of volunteer and paid peer facilitators with lived and living experience of addiction, the release stated.

The funds will also be used to help expand two support groups offered by MSTH, Healing Hearts, a bereavement group for families, and Holding Hope, a group for families who are supporting a loved one who is in active use.

"What a difference it could have made if the Holding Hope group, or even MSTH, had existed when we were facing Sebastian's struggle with addiction," Witt said. "I remember vividly the fear, confusion, and feeling of isolation as we sought help and support. "Seb finally found compassion and support at the Three Bridges clinic on Hornby, and I am eternally grateful to the staff there."

Witt, who is one of 27 North Shore residents who are members of MSTH, said having access to support groups like the ones offered make a world of difference to parents.

“The stigma attached to drug use and addiction in our society affects the parents and families of the lost even as they endure the grief,” Witt said. “It can be unbearable. Healing Hearts offers those families a safe refuge where they can express their grief with people who are experiencing the same feelings.

“We can speak about our children with pride and love and not feel judged or looked down on.”

The federal government has also committed $66 million in funding over two years for community-based organizations responding to substance use issues.

Witt said he was hopeful that all of these announcements and the media focus were “an indication that society is changing its attitude to addiction and substance use.”

“We are finally beginning to accept that this is a public health issue, not a criminal or moral one,” he said.

“Too many people have died when they should not have. This policy and societal change are way overdue.”