Victoria’s police chief has taken to social media to defend his officers’ actions in removing protesters from a government building, saying police experienced “verbal and physical abuse in the course of executing their lawful duties.
Feb 2, 2020 2:09 PM By: Cindy E. Harnett 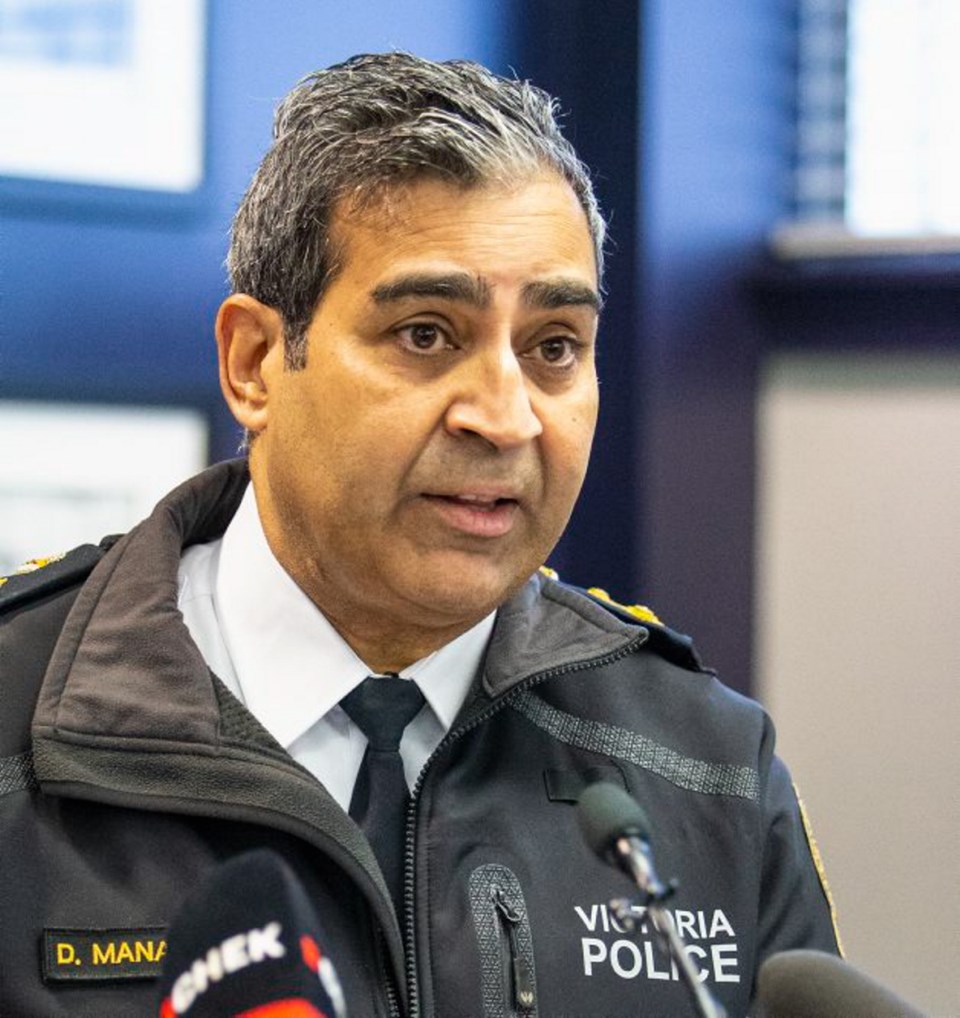 Victoria’s police chief has taken to social media to defend his officers’ actions in removing protesters from a government building, saying police experienced “verbal and physical abuse in the course of executing their lawful duties.”

Del Manak took the unusual step of posting his own video on YouTube to counter what he called misinformation online and complaints from protesters of police abuse. “I’d like to set the record straight,” he said in his introduction.

The accusations stem from the Jan. 21 occupation of the Ministry of Energy, Mines and Petroleum Resources building by 12 Indigenous young people demonstrating their support for Wet’suwet’en hereditary chiefs who oppose the Coastal GasLink natural gas pipeline being constructed in northern B.C.

At the building owner’s request, the protesters, ages 18 through 66, were removed individually over several hours the next day, Manak said.

One of those arrested, Ta’Kaiya Blaney, an 18-year-old member of the Tla’amin Nation in southwest B.C., claimed the protesters were treated with “hatred and racism,” saying she saw one person whose arm and hand were swollen after a lockbox was pulled off by an officer. The protester with the alleged arm injury declined an interview request from the Canadian Press.

B.C.’s police complaint commissioner has received several complaints about use of force by Victoria police during the arrests of the protesters.

A police statement said the “minimum amount” of force was used in the arrests, which took place over a four-hour period. Officers were required to carry protesters from the building to waiting police vehicles, the statement said, while additional protesters outside tried to impede the arrests.

In Manak’s almost three-minute video, the police chief says the protesters actively resisted and obstructed officers. “Officers were pushed, they were kicked, and they were subject to race-based verbal attacks.”

Manak says in the video that he is proud of his officers, who maintained a “very high level of professionalism and restraint in carrying out duties in very difficult circumstances.”

The chief says he’s been notified that several complaints have been made to the Office of the Police Complaint Commissioner, and should the office initiate an investigation, Victoria police will fully co-operate.

“I think it’s important the public know the truth and exactly what happened on this particular morning,” said Manak.

Protesters were not denied medical care, he said. A protester who complained about an unrelated medical issue refused help from a police medic, so B.C. Ambulance was called and a paramedic saw the protester within 30 minutes, said Manak.

Manak also said that outside a 46-minute window when police were securing the area, protesters were allowed food and water. Once they had been arrested, he said, “no one requested or accepted offers to be seen by a paramedic while they were being processed at the Victoria Police Department jail facility.”

The proposed $6.6-billion Coastal GasLink pipeline is a key part of the $40-billion LNG Canada project and will strech 670 kilometres across northern B.C., starting near Dawson Creek and extending to an export terminal at Kitimat.

— With files from The Canadian Press