The murderer's burned-out vehicle was found near Terry Fox Secondary in Port Coquitlam, but police say there is no specific connection to the neighbourhood as they continue to seek witnesses.
Apr 22, 2021 2:27 PM By: Stefan Labbé 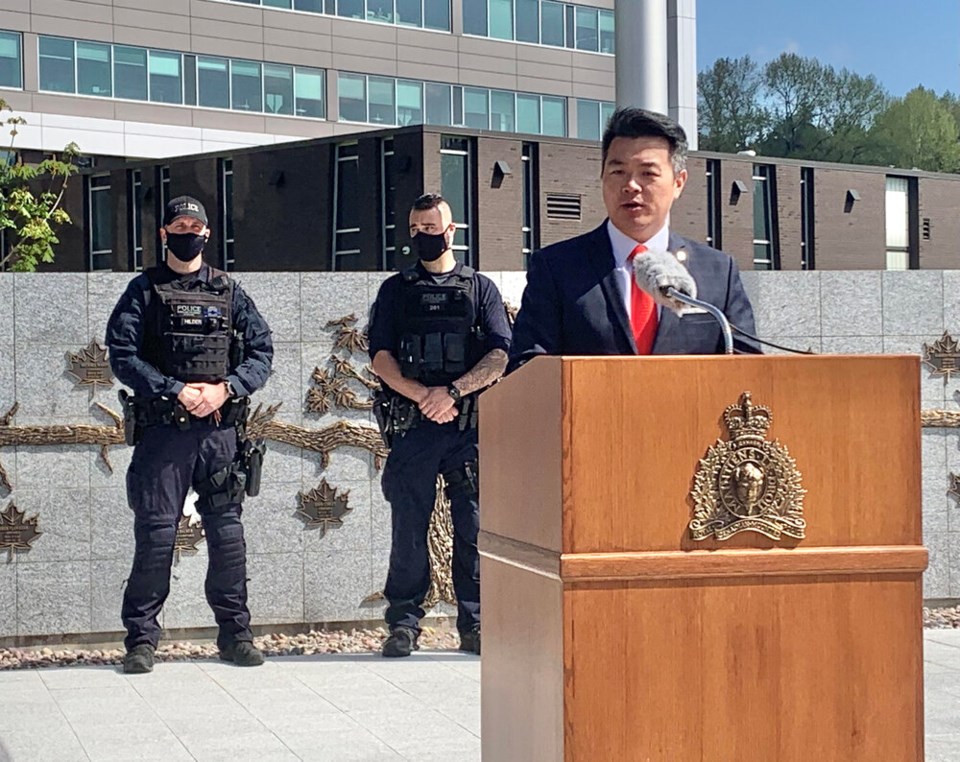 A long-time UN Gang member and former MMA fighter was the man gunned down outside a Langley sports complex in a targeted hit where the murderers dumped their getaway vehicle near a Port Coquitlam high school.

On Thursday, police identified Todd Gouwenberg, 46, of Langley as the man shot outside of the Langley Sportsplex Wednesday morning just as parents were coming to drop off and collect their children.

Sgt. Frank Jang, of the Integrated Homicide Investigation Team (IHIT), said his unit has yet to find any links between the two murders, or between McKinney’s death and a spate of shootings across several Coquitlam neighbourhoods in recent months.

“Not yet, but we’re still looking into it,” said Jang. “Help from the community is what we need.”

Jang said he was “absolutely” concerned about public safety after the two high-profile shootings, as well as the targeted murder of a gangster in Vancouver’s Coal Harbour over the weekend.

“It is brazen, it is reckless,” he said. “It’s out-of-your-mind type of violence that needs to be stopped.”

To that end, Jang is calling on a wide range of witnesses to step forward in both murders.

In the case of the Town Centre Park murder, Jang said IHIT investigators are casting a wide net, from anyone who lives in the area near the 1200-block of Riverside Drive, where the vehicle was found burning, to those living around Lafarge Lake, where the murder took place.

“If they have dashcam video, cellphone video — anything like that — we need them to take action and reach out to us,” he said.

Jang added that surveillance video of the Coquitlam murder captured up to 50 people at the park’s basketball court when McKinney was gunned down.

But police are also appealing to those not necessarily complicit or responsible for the death, but who might have third-hand information, either seeing a related post on social media or hearing something from a friend.

“That isn’t evidence, but that’s good intelligence, good information we can act on,” said Jang.

For those “in the know” but who aren’t the actual shooter, Jang said, “You got to keep in mind you’re helping someone involved in a really heinous crime” and “You got to feel comfortable to reach out to us.”

“Maybe they abetted, maybe family members, friends who, ‘Hey, can you take this piece of clothing for me — get rid of it for me?’ They didn’t want to get involved but they felt pressured,” he said.

The bloody week on Metro Vancouver’s streets prompted the region’s police to gather outside RCMP headquarters in Surrey Thursday morning.

Manny Mann, assistant commissioner of the anti-gang Combined Forces Special  Enforcement Unit, called on gangsters to escape their violent lifestyle through one of the unit's transition programs.

“They do have a choice to get out,” he said.

IHIT’s Jang added: “The power to end this is really in the hands of the people who have the guns.”

But Jang said IHIT remained focused on bringing the murderers to justice.

“In each of our homicide investigations, we believe each of the victims was intended for death, marked for murder,” he said. “Somebody out there had the means, intent, the ability to kill their target and that’s what happened.”

WHY WAS THE ESCAPE VEHICLE DITCHED NEAR A PORT COQUITLAM SCHOOL?

Why was the getaway vehicle in the Langley murder ditched near Terry Fox Secondary?

According to Vancouver Police Department Supt. Lisa Byrne, the Port Coquitlam neighbourhood where the silver Dodge pick-up getaway car was ditched and burned does not appear to have any special connection to the Langley murder.

“No neighbourhood is safe or unsafe. It could be any neighbourhood. Often, they’ll lay down multiple vehicles like that in various neighbourhoods where they will go to after committing a homicide,” explained Byrne. “It really depends on who is the target, the date, the time where they’re going to be. That is their escape route.”

Byrne, who used to be part of a regional task force, said she used to see this operation “over and over again,” where multiple getaway vehicles are left and ditched across the Lower Mainland.

“Targeting someone to murder them is a very fluid operation and they’re going to make a whole bunch of contingency plans. This is the way they do it,” she said.

“They’re usually stolen. If you see them, get the plates. If they have gas canisters in them, call the [emergency] line. That’s how important these vehicles are.”