The plan to build a year-round skiing resort outside Valemount has gained new prominence following the backers' failure to establish a similar resort in the Kootenays, according a letter to the community's mayor.
Mar 4, 2020 12:59 PM By: Alaska Highway News Staff 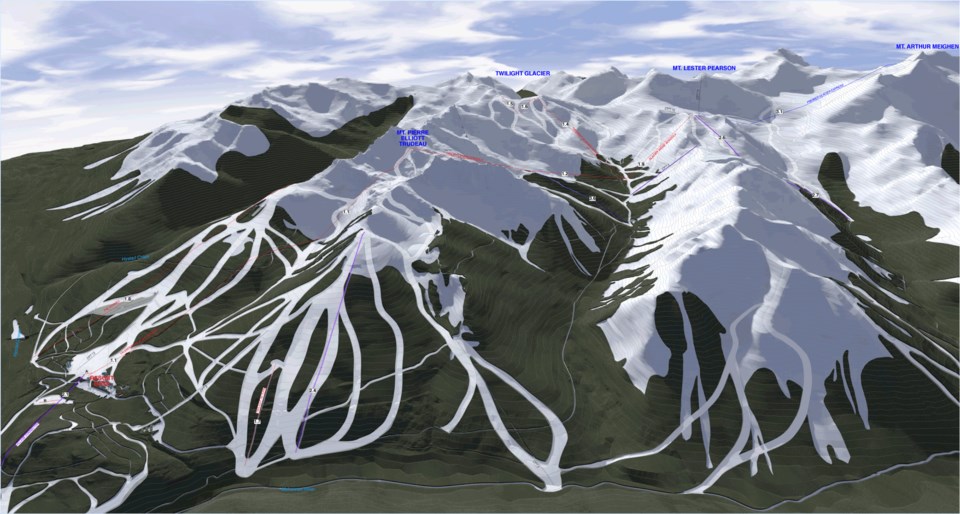 An artist's rendition of the Valemount Glacier Destination Resort.Handout image

The plan to build a year-round skiing resort outside Valemount has gained new prominence following the backers' failure to establish a similar resort in the Kootenays, according a letter to the community's mayor.

In the face of fierce opposition from local First Nations, as well as environmental protection groups, Glacier Resorts Ltd. agreed in January to back out of its long-running effort to build the Jumbo Glacier Resort in the Purcell Mountains.

"This means that the Valemount Glacier Destinations project is now poised to become the only high-alpine year-round glacier skiing destination in North America," said project consultant Tommaso Oberti in the letter to Valemount Mayor Owen Torgerson.

A 60-year master plan agreement with the provincial government was signed in March 2017 but since then there has been little if any progress on the project, which is to provide access to the summits of Mount Pierre Elliot Trudeau, Twilight Glacier, Glacier Ridge, and Mount Arthur Meighen, and a village with residential, hotel and commercial space.

The project's price tag had been put at $100 million, but in January, Oberti said a scaled-down version could be developed if between $50 million and $75 million is raised.

"If the money were to come in tomorrow, we would start construction this summer," he said. "It would take a year to get the day lodge and initial gondola built, so you're looking at the earliest possibility for skiers on the mountain being 2022."

In response to criticism that "Valemount is in the middle of nowhere" and lacks an airport that can handle scheduled flights, Oberti noted it is about 80 minutes by car from Jasper, which he said could be the source of many visitors.

Moreover, in contrast to the opposition the Jumbo project received from the Ktunaxa Nation, the Simpcw First Nation is a partner in the Valemount project.

"The Valemount Glacier Destinations project has no equal and will be truly transformational once built," Oberti said in the letter.

However, Hugh Smythe, a retired ski industry veteran, suggested $100 million is the minimum to get a viable resort off the ground.

"You can't build a rope tow, or a couple of fixed-grip lifts and think that you're going to attract the numbers that you need," he said.

"You're going to have to put a ton of money into it. I'm talking about everything from the infrastructure, the whole works. There's the road, the water, the sewer, the power - everything before you even start. Then there's the lifts, trails, snowmaking and lodges and buildings, and everything like that."

Oberti's letter was included in the agenda package for the most-recent Fraser-Fort George Regional District board of directors meeting.