From Ontario to Vancouver and Prince Rupert, waves of protests in sympathy with a small group of hereditary chief with the Wet’suwet’en opposed to the Coastal GasLink pipeline have shut down freight and passenger trains, and blocked access to ports i
Feb 10, 2020 6:49 PM By: Nelson Bennett 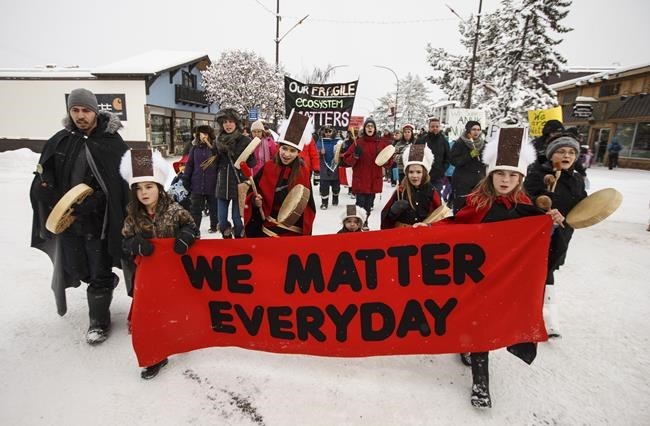 Supporters of the Wet'suwet'en hereditary chiefs and who oppose the Costal Gaslink pipeline take part in a rally in Smithers B.C., on Friday January 10, 2020. The British Columbia government and First Nations hereditary chiefs say they have failed to reach an agreement on a peaceful resolution over the enforcement of an injunction in northwestern B.C. THE CANADIAN PRESS/Jason Franson

From Ontario to Vancouver and Prince Rupert, waves of protests in sympathy with a small group of hereditary chief with the Wet’suwet’en opposed to the Coastal GasLink pipeline have shut down freight and passenger trains, and blocked access to ports in Vancouver, Delta and Prince Rupert.

What started out as a small protest limited to an area near Houston, B.C. has quickly morphed into #ShutDownCanada, with multiple public demonstrations and blockades involving non-indigenous protest groups like the Red Braid Alliance for Decolonial Socialism.

In Ontario, members of the Tyendinaga Mohawk First Nations parked heavy equipment at an intersection along railways tracks, forcing the cancellation of VIA rail trains.

In B.C., since Thursday February 6, a series of protests ramped up and over the weekend halted train and truck traffic to Deltaport, the Port of Vancouver and Prince Rupert.

CN Rail reports that 200 trains have been held up in B.C. and Ontario.

"These blockades are having a severe impact on all Canadians as it is restricting the movement of all goods," CN Rail spokesperson Jonathan Abecassis said in a news release.

Shipments of grain, grocery goods, lumber, propane and various consumer goods have been held up by the protests.

"The blockade in British Columbia is affecting all traffic in and out of the Ports of Prince Rupert and Kitimat, BC. Our main line has been shut down for two days since approximately 3 p.m. local time on Saturday, February 8.

"The disruption to port operations over the past four days has had a significant impact on Canadians across the country, who rely on the businesses that import and export goods through the port for employment and for the products that support each of us every day," the Vancouver Port Authority said in a written statement.

Protestors with the Red Braid Alliance for Decolonial Socialism blocked an access road to Roberts Bank Sunday, February 10, according to the Delta Optimist, which reports that Delta police began making arrests this morning, February 10.

To date, RCMP have arrested more than 20 people while enforcing an injunction against protestors blocking access to work sites for the Coastal GasLink pipeline. The $6.6 billion natural gas pipeline project is a key component of the $40 billion LNG Canada project.

In response to those arrests, a number of First Nations and their non-indigenous supports held demonstrations and blockades across the country. Protestors gathered at city hall in Vancouver Sunday, and are scheduled to rally today at the BC Legislature. In total, Vancouver City Police say 33 people were arrested for blocking access to Vancouver's port facilities.

It's not clear why port authorities and CN Rail needed to seek court injunctions to have police clear roads and train tracks that are being illegally blockaded. Business in Vancouver reached out to Public Safety Minister Mike Farnworth for comment. He responded by saying it's up to the courts and police to decide how to deal with illegal protest activities.

"The courts and the police make decisions independent from government," he said in a written statement to BIV.

What started out as an effort by one small group of dissidents within the Wet’suwet’en – the elected band councils of which support the project – has spread quickly to target other areas of the economy.

“I think that anybody who recognizes the importance of how our economy works should be concerned that this can happen,” said Susannah Pierce, spokesperson for LNG Canada.

“What concerns me too is these sorts of things in support of one small group of hereditary chiefs is, in its own way, supporting the veto of one group over major infrastructure, which is not how I believe I democracy or our regulatory system should work.”