Premier Christy Clark was in Fort St. John Wednesday, April 20, to deliver a speech at a LNG rally in Centennial Park, get an update on the wildfire situation in the region, and meet with municipal mayors.
Apr 28, 2016 11:26 AM By: Jonny Wakefield,Matt Preprost 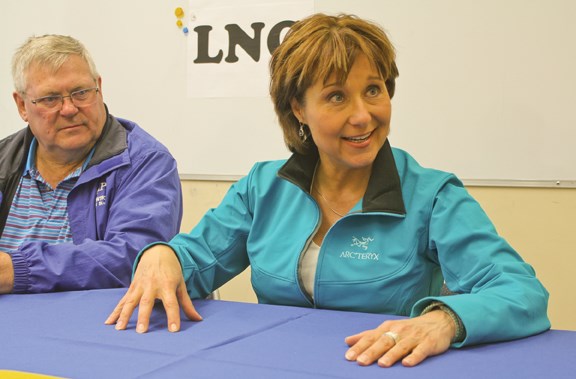 Premier Christy Clark was in Fort St. John Wednesday, April 20, to deliver a speech at a LNG rally in Centennial Park, get an update on the wildfire situation in the region, and meet with municipal mayors.

Following her speech and press conference at the rally, Clark sat down with the Alaska Highway News to talk about why she thinks Site C will be the last dam of its kind in Canada, the struggles to launch LNG as she heads into the 2017 election, and rumblings that the federal government is purposefully stalling Pacific NorthWest LNG to avoid making a tough decision.

Alaska Highway News: You mentioned during the press conference that there was a connection between liquefied natural gas and the forest fires we're having right now. I was wondering if you can expand a bit how LNG can assist in the climate change we're facing now and the forest fires that are a result of that.

Christy Clark: Well, I'll give you an example. China has 150 coal plants on the books to be built immediately. And the only way China is not going to build those filthy, belching coal plants is if they have a different kind of fuel to power the country up. And that has got to be LNG. There isn't any other fuel they can use that would prevent them from building those coal plants and LNG is the cleanest fossil fuel on the planet. If the world today, if everybody who is using coal and oil switched to natural gas we would be a third less polluting. We would be able to cut global greenhouse gases by about a quarter or something of that nature. In one leap.

I always remind people that fracking is the biggest technological leap in fighting climate change that we've had so far. We really should be supporting the work that folks do up here in fracking, getting it out of the ground and making it possible to have the supply that we need to send it. And we know, on the second part of the question, that forest fires in British Columbia, and North America, are being caused in part, exacerbated in part, by this drier climate. Drier climate is a product of climate change. If we want to be able to slow down the rate of temperature change and have fewer fires, or at least get stable on that front, we're going to have to step up our efforts to fight climate change. It's happening right here, it's the land right that we're sitting on, all of that energy under this land that's going to allow us to do that. But we need governments across the country, decision makers, to help make sure we can get it out of the ground so we can help join them in this fight.

AHN: About the rally: why show up to something like that?

CC: Because people here need to know that I'm fighting for them. Every single day, our government, and Pat has been a huge part of this, our government is fighting for people in the northeast. Because people here are really hurting. A lot of people without jobs, I talked to a lot of them today. They're not people who don't want to work. They're people who can't find work. And I want people here to know that we're fighting for their jobs and we want to bring the wealth and economic prosperity back to this region of the province.

But I also want people in the rest of the country to see how much support there is for what we're doing here, and how many people are fighting together to make sure that LNG happens. It's not just me and Pat (Pimm) down in Victoria fighting for this. This is a whole province coming together to fight for this.

AHN: Have you ever been to a rally like that before for LNG? I know obviously there are conferences you've been to and things like that.

CC: I cant remember any other rally I've attended where people we're so focused on just LNG. I'll tell you why. I think until recently people really just, things seemed to be going along, you know then the price of oil and the price of gas dropped precipitously. That slowed things down a little bit. Then this regulatory process federally got everything bogged down even further. And then you add all the economic pain that's been happening in Alberta into the mix. We're starting to see really high unemployment here, again, for the first time in a long time. And I think that's got people really focused on trying to find solutions. The solution for unemployment in the Northeast is LNG. Natural gas is abundant now in North America. We can't make any money, there's hardly any point of getting it out of the ground if we aren't able to ship it to Asia. So LNG is an absolute must-do if we want to create jobs. We want to keep people working here.

AHN: About the delay on Pacific NorthWest LNG. There's been some suggestion that by delaying this for three months there's an ulterior motive that the federal government would like to make this difficult for Petronas and these delays cause them to walk instead of them having to say no directly. What do you say to that suggestion there?

AHN: We're coming up on the 2017 election. In 2013, LNG was the hot topic, it's still the hot topic. There's a lot of question whether a plant will be approved by then. How are you going to make the case to British Columbians that despite the fact we haven't seen, or may not see by 2017 a firm final investment decision, that this is a course we should stay on?

CC: We're not going to give up. We're not quitters. British Columbia wasn't built by people who quit and run the white flag up the pole every time something gets hard. This has turned out to be harder than I anticipated, or anybody anticipated, because the price of oil dropped so dramatically. But that doesn't mean we give up. We have the richest natural gas resource in the world. Petronas owns more natural gas resource in British Columbia than they do in Malaysia. And it's a rich, wet resource, relatively easy to access. We are literally sitting on a treasure trove here in the northeast and we aren't going to give up. We're going to make sure we unlock that potential for British Columbia. It's going to take longer than we thought. But I think the question in the election is do British Columbians want to vote for a party of quitters? Or do they want to vote for a party of people that are absolutely bound and determined to make sure that we make the most of this resource for the people who live here?

AHN: I wanted to jump into a question about Site C. In the recent Moody's report on the province's credit rating, Moody says it's going to be keeping a closer eye on BC Hydo and the debt it is taking on to build Site C. Is that a concern for you?

CC: We always pay attention to our debt levels, and all of the agencies that pull debt. It's my ambition, my hope, that we're going to be able to erase the debt for another generation of British Columbians. That's going to take a long time, but we're on the right track. We are eliminating our operating debt for the first time since 1974. That's pretty good. Since I was nine years old, this debt has existed. We are on the track to get rid of it now. That's the first step to debt-free. But, BC Hydro's debt is ratepayer supported. It's not classed the same as taxpayer-supported debt, but we do watch it carefully. It's important that the project stay on time and on budget, which they have. I have to say the folks at BC Hydro have done a really good job of making sure the project proceeds as planned. And if it proceeds as planned it means it will stay on budget. If it stays on budget, there's nothing to worry about. But BC Hydro is keeping an eye on it as well.

AHN: How closely you're watching the Muskrat Falls project in Labrador? It seems every couple weeks you hear something that's gotten more complicated, or there's another cost overrun there. How does B.C. keep from falling into a similar situation?

CC: The same reason we have a balanced budget and they don't, and the same reason we have the fastest economic growth in the country and they don't. We really watch our Ps and Qs, (and are) very careful about those financials. Important though to remember too—BC Hydro spent 10 years planning this project. This isn't a back of the envelope project. That's meant they have worked through almost every scenario and tried to risk-manage that. So it's really minimized any of the risk that they have. That kind of extra work and the time that they took to do it is really paying off now. I don't know very much of the background to Muskrat Falls, but I do know that in British Columbia we have proven ourselves and the country to be the leaders in managing the province's finances well and that includes BC Hydro.


AHN: In BC Hydro estimates, Adrian Dix suggested Site C is already budget. I wanted to hear what you thought about that.

CC: Adrian Dix says something every day that doesn't add up. I don't know if that's one of them, but I'm guessing it is.

AHN: It's been said Site C will likely be the province's last major dam.

CC: I think it will be the country's last major dam.

AHN: Why do you say that?