Some Wet’suwet’en members not happy with hereditary chiefs

Federal and provincial ministers of Aboriginal relations were planning to meet with chiefs representing the Office of the Wet’suwet’en last week to try to resolve what has turned into a national crisis, with the flashpoint being the Coastal GasLink p
Feb 25, 2020 1:39 PM By: Nelson Bennett 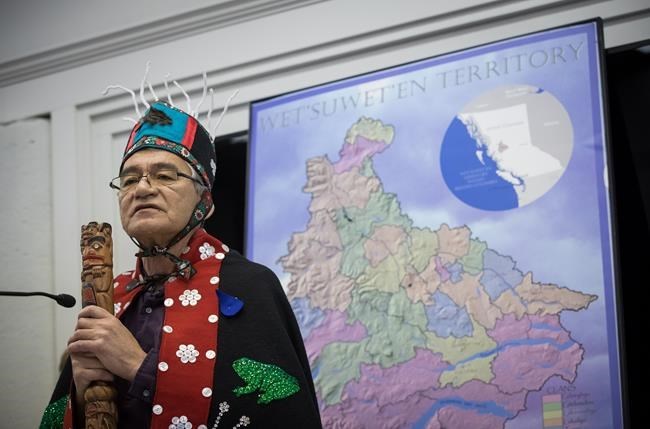 Wet'suwet'en Hereditary Chief Namoks (John Ridsdale) speaks as Indigenous nations and supporters gather to show support for the Wet'suwet'en Nation before marching together in solidarity, in Smithers, B.C., on Wednesday January 16, 2019. A hereditary chief with the Wet'suwet'en First Nation says the community is expecting further police action after the British Columbia Supreme Court ruled in favour of a natural gas company that wants to build a pipeline through its territory. THE CANADIAN PRESS/Darryl Dyck

Federal and provincial ministers of Aboriginal relations were planning to meet with chiefs representing the Office of the Wet’suwet’en last week to try to resolve what has turned into a national crisis, with the flashpoint being the Coastal GasLink pipeline.

They were rebuffed again on Thursday.

But some Wet’suwet’en members, including at least one hereditary chief, are questioning the authority of the Office of the Wet’suwet’en to speak for them.

Those are some of the findings of Stewart Muir and Margareta Dovgal of the energy industry advocacy group Resource Works, who have spent the last couple of weeks travelling throughout the territory, from Prince George to New Hazelton, interviewing Wet’suwet’en people.

Some of them say the Office of the Wet’suwet’en is not following proper protocols.

“It is interesting that some of our chiefs are choosing to do everything via the media and not following proper protocols, and it’s somewhat concerning for me,” Troy Young, a Wet’suwet’en entrepreneur with the Moricetown Band’s Kyah Resources Ltd., said in one of the video interviews conducted by Muir and Dovgal.

“Looking at how this has blown up into a national media event ... it would be appreciated and respectful to our culture if people would leave us to our own devices.”

“There’s one chief that talks for the whole nation and that’s not our way,” said Gary Naziel, a hereditary chief. “In our feast hall, each chief gets up and talks for their own clan. And this one chief goes around saying he speaks for all the chiefs. And it’s not the Wet’suwet’en way.

“We need to include all the other house chiefs, all the wing chiefs, in the decision-making. Democracy is in our feast halls. That’s where decisions are made. We need to restructure the office [of the Wet’suwet’en].”

“The Wet’suwet’en Nation being publicized in the media right now, it’s only a small group that does not represent the nation,” said Bonnie George of the Witset First Nation (Moricetown), one of five Wet’suwet’en bands.

“Traditional law is clear and it’s not being respected,” Dovgal said. “That’s coming through universally.

“Every single person we’ve spoken to, whether they are named chiefs … all the way through to children of house chiefs, the traditional laws – the unwritten constitution that exists in this community – has just been flagrantly disregarded.

“There has been this confusion that has been created about who has the rightful claim to a name.”

Hereditary chief titles are not automatically conferred on someone as a birthright. Recipients are groomed for the title and must earn it. It is given to them at a feast, at which the members of that house confirm the title.

Three female hereditary chiefs who support the pipeline project, and tried to form a coalition that would bring the Office of the Wet’suwet’en and elected band councils together, were stripped of their hereditary chief titles for their efforts.

“I think that if they were to hold a Wet’suwet’en-wide referendum, I think that they would have a yes vote,” said Karen Ogen-Toews, a former elected Wet’suwet’en chief and current CEO of the First Nations LNG Alliance.