A new effort is underway to pressure the province to prioritize building a new Taylor Bridge.
Dec 8, 2020 1:32 PM By: Alaska Highway News Staff 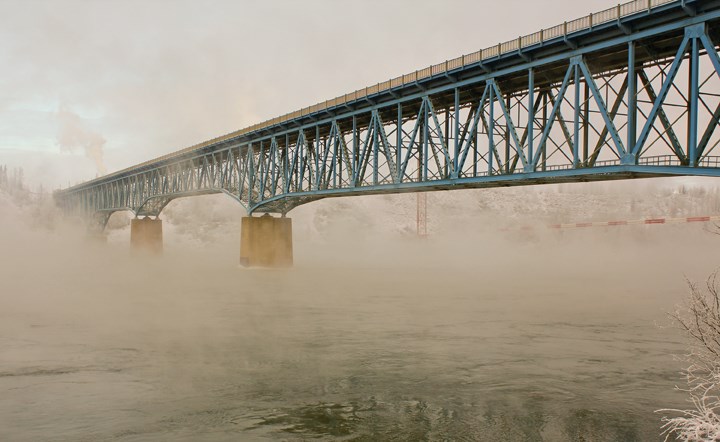 The Taylor Bridge carries an average of 7,500 drivers a day across the Peace River.

A new effort is underway to pressure the province to prioritize building a new Taylor Bridge.

The Independent Contractors and Businesses Association has launched a letter writing campaign calling on Premier John Horgan, as well as finance minister Selina Robinson and transportation minister Rob Fleming, to include the bridge's replacement in the new government’s agenda.

“Hopefully we get thousands of people signing on,” said ICBA President Chris Gardner.

Built in 1960, the Taylor Bridge is a critical link over the Peace River between Fort St. John and Dawson Creek, carrying "millions of dollars of merchandise, food, fuel and equipment" every hour throughout the Peace region and into the Yukon, Northwest Territories, and Alaska, the ICBA noted.

Though the transportation ministry has already prepared a business case and started early engineering works, the ICBA says a new bridge is still not included in the provincial government’s 10-year capital improvement plan.

The old bridge is quickly deteriorating, and replacing it is crucial for the regional economy, and the province’s broader recovery from the COVID-19 pandemic, Gardner said.

“So much of the wealth created in B.C. is created outside the Lower Mainland. We often lose sight of that,” said Gardner. “People in other parts of the province don’t appreciate how important regional infrastructure is.”

“As we look at a COVID recovery plan, there is potential for federal funding if the province designates it as an important regional project. That would require the province saying, this is important, we’re committed to replacing the bridge,” Gardner said.

Ministry officials have said it will cost at least $250 million to replace the bridge with a new, two-lane structure. They were investigating other options as well, including a more expensive four-lane bridge, or resurfacing the steel deck and eliminating the annual welding program.

“For us, we try not to focus on the bridge; we try to focus on the whole crossing,” said Fraser. “So the lanes on both sides on the hill, what the highway is going to look like going through Taylor, and then of course the bridge crossing itself.”

Work began this year to stabilize a section of the south Taylor hill, needed before the top of the hill can be expanded to four lanes.

Taylor has been the lead community on the bridge and crossing issues, Fraser said, and the council hopes for some face-to-face time with Fleming in his new role as transportation minister.

“This time around it’s a majority government, so the ministers will be able to get out of Victoria a little more,” Fraser said. “Last time it was a minority government, and they couldn’t afford to have one person leave the legislature.”

MLA Dan Davies says he is also sending an invitation for Fleming to visit the region, and to see the condition of the bridge and rural roads firsthand.

"This has been something that I have been working on with many other local elected officials over the past number of years. We have invited past ministers of transportation to look at the bridge and visit some of the roads in the North Peace, and I am hopeful that Minister Fleming will accept," Davies said.

"The Taylor Bridge is a great infrastructure project that will get people working on a critical piece of road infrastructure that is needed to ensure we can keep our roads safe. Between the resource sector and the motoring public, this bridge must be replaced. This would be a great choice for recovery spending."

Public consultations on the bridge were supposed to happen in the spring, but were cancelled after the pandemic was declared.

Earlier this year, MP Bob Zimmer said that replacing the bridge should be a top priority in the federal government's pandemic recovery plan.

"This is an integral section of the Alaska Highway and millions of dollars of commercial goods and approximately 7,5000 vehicles normally cross this bridge every day," Zimmer wrote in a May 14 op-ed. "Replacing this bridge now will no doubt have a long-term positive impact on our economy and our communities."

Learn more about the campaign and send a letter by visiting BuildTaylor.ca.