This young girl from Taylor is making a difference for sick kids across B.C.

Today is going to be a good day – it's a simple reminder from a brave young girl meant to inspire sick kids and those with a heart to help them.
Nov 5, 2019 9:29 AM By: Alaska Highway News Staff 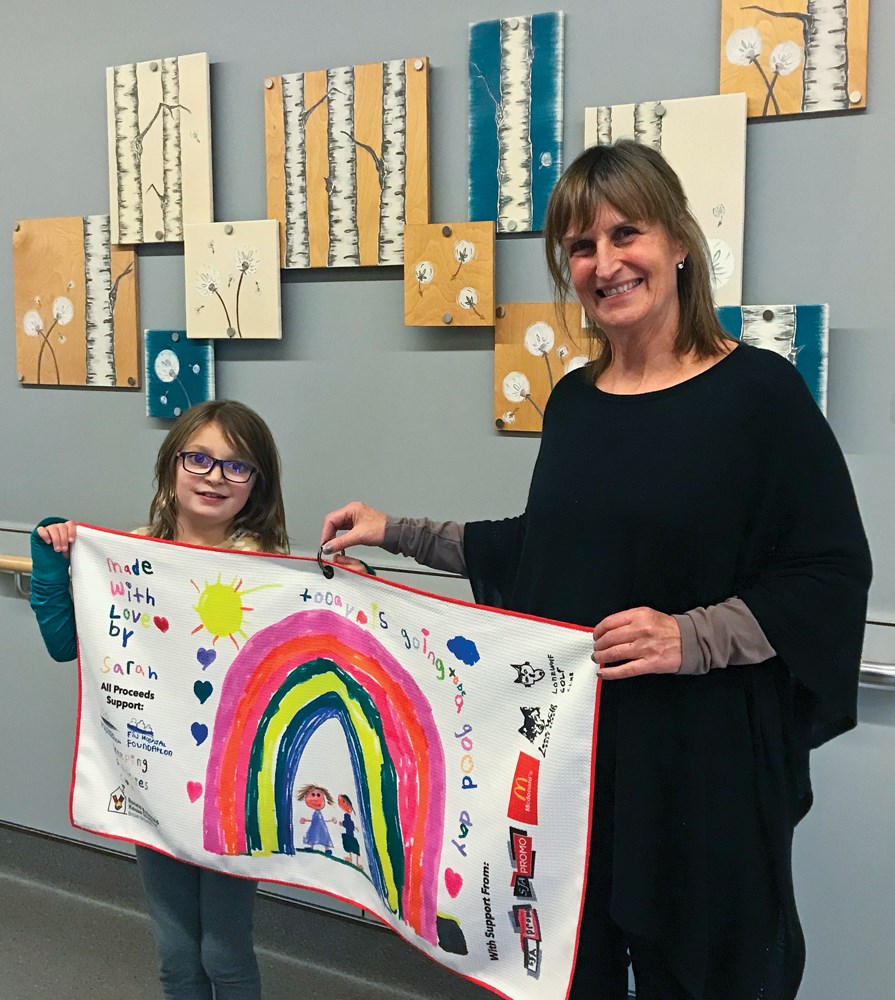 Today is going to be a good day – it's a simple reminder from a brave young girl meant to inspire sick kids and those with a heart to help them.

Sarah Byford, 8, used the message as part of a design she drew and had printed on golf towels as part of her upcoming fundraiser to help sick kids through the Fort St. John Hospital Foundation and Ronald McDonald House.

Byford lives in Taylor, and stayed at Ronald McDonald House for two weeks after undergoing open heart surgery earlier this year. She said she’s giving back to see sick kids smile, and “so they can be able to fulfill their dreams,” and to thank the organizations for their kind and friendly care.

Byford hopes to raise at least $2,500, to be split between the two charities, at a fundraiser she'll launch the Taylor Community Hall on Saturday, Nov. 16, 2019.

If she hits her goal, Byford will have raised more than $10,000 over the last two years in support of sick kids and the charities that help them.

It's a cause dear to her heart — literally.

Byford underwent surgery in February to repair a hole in her heart, a condition known as atrial septal defect. Her heart was also enlarged, around four times the size it should have been — doctors said young Sarah's heart was like an NFL player's constantly because it was working so hard, her mother Amy said.

Byford was diagnosed when she was only five and had to wait for two years to have her surgery. But that didn't stop her from taking action, holding her first lemonade stand and teddy bear fundraiser in the rain in July 2017, raising $1,800 and 250 bears for the Children's Hospital Foundation in Victoria.

She's raised $8,500 through various initiatives since, from bottle drives to setting up a hot chocolate stand shortly after moving to the Peace region with her family in October 2018.

"I love to do charity, I don't push it on her. It's her vision. I wanted to follow her dream," Amy Byford said.

"Her Christmas wish is to go to Ronald McDonald House to serve them dinner. How many kids ask for that?"

Amy remembers having to sign a form when Sarah went in for her surgery, acknowledging the risk that she may not survive. But Sarah perseveres, and pushes herself to the limit, Amy said. In Sarah's mind, she's never been a sick kid, Amy said.

"One slogan we use at home, right from day one, is sometimes superheroes are living in the bodies of small children and empowering the world," she said.

Niki Hedges, executive director of the Fort St. John Hospital Foundation, called Sarah one of the foundation's star fundraisers, with courage and tenacity that should inspire others. Her hot chocolate stand in December 2018 raised $800 for the hospital foundation.

"That's the thing about children, they absolutely care and want to make a difference," Hedges said.

"Sarah has gone even bigger with a fundraiser that everyone is going to love. It is a reminder that every day is gift and will bring a smile to everyone."

Byford collaborated with SJA Promo, which took her design and pressed it into reality, and have sponsored some of her costs.

"When you see that kind of generosity in a young girl like Sarah, you can’t help to want to support her; and when you hear her story, you admire her strength and kindness," said owner Julie Roach-Burns.

"At the North Peace RMH Charity Golf Tournament in Fort St. John, I met the Byford family while they volunteered their time to support the event and shared their experience of leaving home to stay at RMH BC for Sarah’s heart surgery in Vancouver," Purificacion said.

"We are so lucky to have Sarah’s support in a community where many of our families come from."

Byford will launch her fundraiser Saturday, Nov. 16, 2019, at the community hall in Taylor.