The year 1897 was not exactly a peaceful time between First Nations and European settlers. Around that time, the Commissioner of the North West Mounted Police instructed Inspector J.D.
Jan 1, 2016 9:15 AM By: William Stodalka 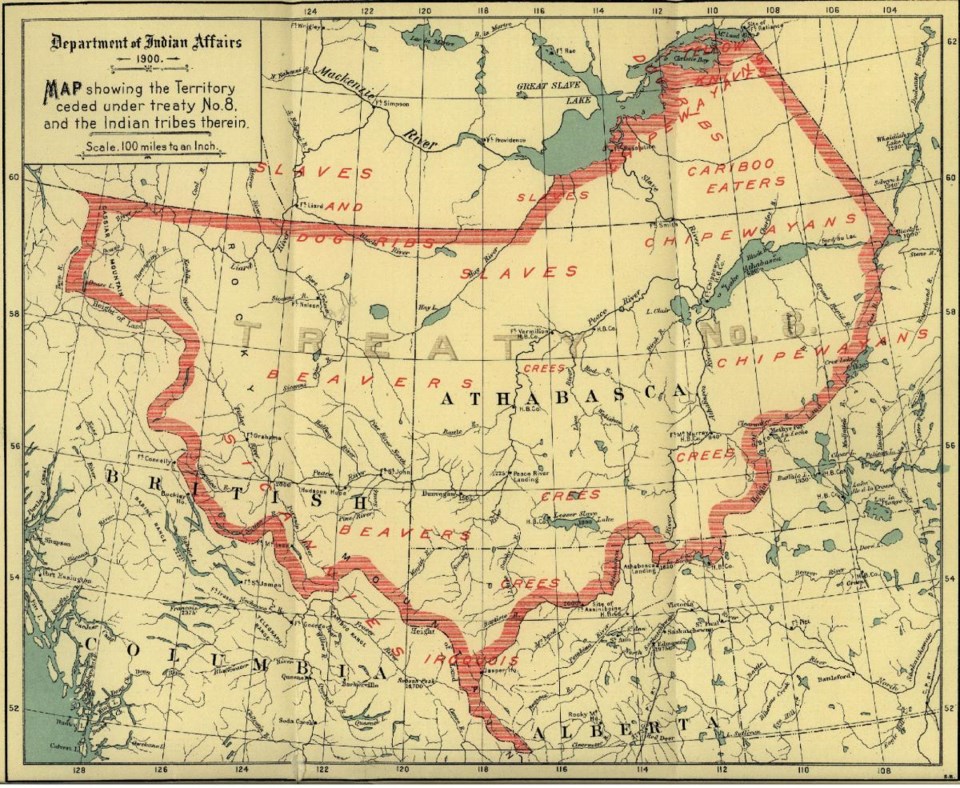 A federal government map showing the boundaries of Treaty 8.Government of Canada

The year 1897 was not exactly a peaceful time between First Nations and European settlers.

Around that time, the Commissioner of the North West Mounted Police instructed Inspector J.D. Moodie to collect information on a route from Edmonton to the headwaters of the Pelly River for parties of miners heading to the Klondike gold fields.

After a long expedition, Moodie came back with bad news. There were reports of theft, confrontations, and threats between First Nations and prospectors at Fort St. John.

“(A post manager) informs me that the Indians here at first refused to allow the white men to come through their country without paying a toll,” he wrote. “There is no doubt that the influx of whites will materially increase the difficulties of hunting by the Indians.”

Two years later, in 1899, the Canadian government and area First Nations signed Treaty 8, which covers much of Northeast B.C., including Fort St. John and Dawson Creek,  along with portions of northwest Alberta and the Northwest Territories. and was meant to avert conflict.

Even though it was a peace treaty, a dispute continues 116 years later over its most basic principles.

Several Northeast B.C. First Nations and the province are in court fighting a decade-long legal battle that could re-draw the map of Treaty 8 boundaries as they are currently accepted by the federal government.

Though it was first signed in 1899, only 32 years after Canada became a country, where Treaty 8 ends on its western side is in dispute.

In 2005, those six First Nations sought a declaration that the western boundary was along the Arctic-Pacific watershed. On its northwestern point, this is near Highway 37, and near its southwestern edge, it’s located near Takla Lake.

The federal government also agrees that this is the boundary, and its maps of the treaty reflects that.

"Honouring Canada’s lawful obligations to Indigenous people and working collaboratively to renew the relationship based on recognition, rights, respect, co-operation and partnership is key to achieving reconciliation with Indigenous people in Canada," wrote federal Indigenous and Northern Affairs spokeswoman Michelle Perron in an email to the Alaska Highway News.

"Canada believes that the best way to address outstanding issues and achieve reconciliation with Indigenous Groups is through collaboration and dialogue. Negotiated agreements and outcomes are preferred wherever possible."

In their court submissions, the First Nations cite a map drawn up by the Treaty Commissioner in 1900 and a map proposed to the B.C. government of the time, as defining the western boundary, among other evidence.

The B.C. government doesn't recognize the boundary and believes the interpretation is incorrect.

In its submissions, the province argues the boundary should be along the central range of the Rocky Mountains, west of Hudson’s Hope. According to Treaty 8’s website, this would cut Treaty 8 territory by more than 100,000 square kilometres.

The province has cited sections of text within Treaty 8 and a 1913 map as part of their arguments in the dispute.

When reached for comment, the province declined, saying it was not appropriate to comment as the matter is still before the courts.

The dispute affects First Nations members in ways that are not just cartographical. Where the treaty boundary ends determines their Treaty and Aboriginal rights to hunt and fish. Treaty rights do not extend outside of these boundaries, so, for example, these rights wouldn’t extend if members went hunting and fishing in Saskatchewan.

To call this case complicated would likely seem an understatement to someone not versed in Aboriginal law — and perhaps, it would also seem complicated to those who are.

The court proceedings first began in August 2005, and while the trial began in 2014, it’s still only in the trial stages as of early December. According to Treaty 8 lawyers, closing arguments will be heard in April.

One court document suggested that there has been already 17,000 documents of undetermined size put forward by all parties as a result of the case — and that statement was made two years ago.

In addition, multiple First Nations outside of the original plaintiffs were added to the case — in two instances, as defendants along with the province.

One of them is the Kaska Dene Council, which represents three First Nations in northern B.C. and two in the Yukon who make up the Kaska Dene people. They want the Treaty 8 boundary to be extended further east than the federally accepted boundary.

“Most, if not all, of the Kaska traditional territory is located within the disputed western portion of Treaty 8,” the council claims in court documents.

The council is negotiating a new treaty with the province of B.C., but to do so, it must resolve any overlapping claims with Treaty 8 nations.

The McLeod Lake Indian Band, a Treaty 8 signatory, also asked to be added to the suit. According to its 2012 response to the civil claim, the band agrees that Treaty 8’s western boundary is along the Arctic-Pacific watershed, but disagrees that there is a threatened infringement of any right.

Finally, other First Nations — the Tahltan Nation, Takla Lake, and Tsay Keh Dene — have asked to be named intervenors in the case, though none have signed onto Treaty 8.

The current litigation has major implications for Tsay Keh Dene Nation. If Treaty 8 First Nations are successful in their lawsuit the majority of TKD's territory will be affected, resulting in a substantial increase of pressure on already scarce resources within Tsay Keh Dene territory – resources on which the Tsay Keh Dene people depend on in order to sustain themselves, their way of life, and economy. Tsay Keh Dene Nation has never signed a treaty and asserts its unextinguished Aboriginal rights and title in and to all of its territory."

In total, 13 First Nations have some type of official interest in the outcome of this case.

Given the complexity of the case, and the possibility of appeal, it may be some time before a final judgment is rendered — perhaps in time for the 120th anniversary of the treaty signing.

[Editor's note: A previous version of this article contained incorrect information regarding the position of the Tsay Keh Dene First Nation and the Tahltan Nation. The nation disagrees with Treaty 8 First Nations and the federal government about the location of the boundary. A full statement from the nation can be read above. We apologize for the error.]