VICTORIA — British Columbia's public safety minister is warning of potential contamination in illicit cannabis and the dangers of misleading packaging for illegal cannabis edibles.
Jun 9, 2021 5:30 PM By: The Canadian Press 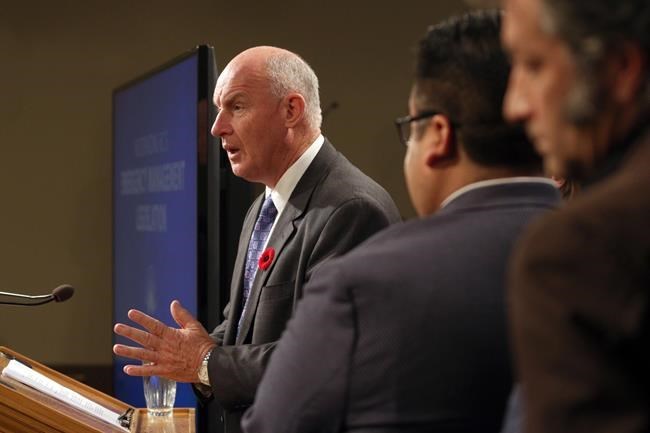 Health Canada requires licensed cultivators to test cannabis to make sure it's fit for consumption, but little is known about the quality of illicit cannabis products and production, said Mike Farnworth, who is also the solicitor general.

B.C.'s cannabis secretariat did a pilot study to test 20 dry cannabis samples seized from six illicit stores in Metro Vancouver and the results are concerning, he said.

All but two samples contained at least one of 24 different pesticides, as well as "unacceptable levels" of bacteria, fungi or heavy metals, he told a news conference on Wednesday.

The study was done in collaboration with the B.C. Centre for Disease Control and the National Collaborating Centre for Environmental Health, which found just three of the 20 samples would have been immediately fit for sale had they been legal.

Those three samples contained levels of micro-organisms and arsenic, cadmium, mercury and lead that were below established standards, as well as pesticide residues with negligible health risk, a report from the national centre said.

Of the remaining samples, it said nine would have been considered unacceptable for sale due to the presence of pesticide residues, elevated heavy metal concentrations and indicators of unsanitary production.

The other eight samples would have required further investigation to determine how pesticide contamination occurred, whether any regulations were broken and if any health hazard would have existed for consumers, the report said.

The frequency and variety of pesticide findings in the study are concerning when compared with the testing data from legal cannabis samples, it said.

An analysis of 63 dried cannabis samples from licensed Canadian producers in 2018 detected two pesticides in a total of eight contaminated samples, it said. The study said sampling of surfaces at two cannabis cultivation facilities this year found evidence of 41 pesticides at the unlicensed site compared with six at the licensed one.

Because pesticides are ubiquitous in the environment, the report said, it would be impractical to require every legal cannabis sample to be free of pesticide residue.

The report outlines some limitations of the pilot study, saying it focused on dried cannabis flower, the raw material used to create cannabis extracts, while the small sample size is not representative of all illicit cannabis in Metro Vancouver. The original source of the cannabis samples was not known, it said, so they could have been produced by 20 different growers, or one.

Farnworth also warned of illicit cannabis edibles with packaging that imitates well-known candy, cookies and snack brands that could be appealing to children, saying the THC concentration in illicit edibles often exceeds the legal limits.

"For adults who have children in their lives, do not buy illicit cannabis that is packaged to look like candy, because kids can mistake it for candy and may end up in hospital," Farnworth said.

He said buying cannabis products from an illicit storefront or online seller may also be supporting organized criminal operations.

"In contrast, when you buy from a licensed seller, you can trust the label on the product, you know that you're supporting legitimate, local businesses and workers, and you can feel assured that the tax revenue will go toward the public services that we all rely on."

There are more than 370 legal cannabis stores in B.C. and consumption of legal compared with illicit cannabis is on the rise, Farnworth added.

About 160 illicit stores have either been forced to or voluntarily shut down across B.C. since enforcement began after non-medical marijuana became legal, he said.

— By Brenna Owen in Vancouver.

This report by The Canadian Press was first published June 9, 2021.