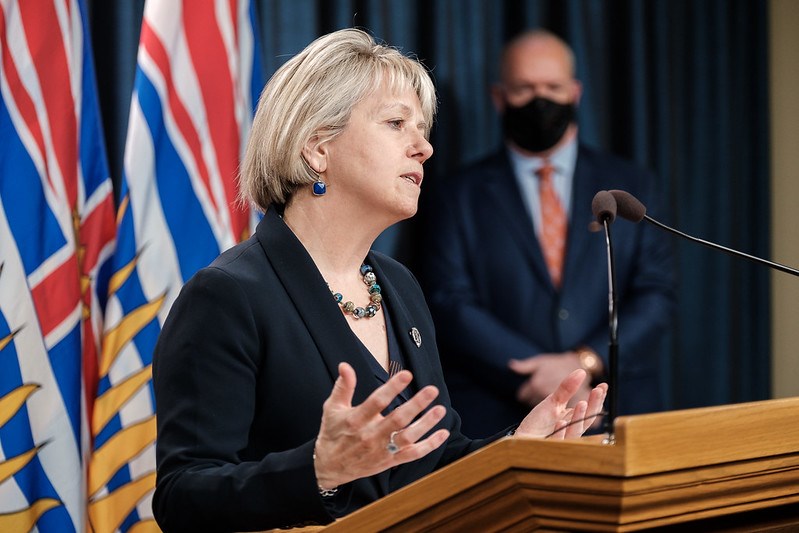 The number of those actively battling infections rose by 231 overnight, to 10,052 people. This is the first record high since December 14.  The vast majority of those infected have been told to self-isolate.

Of the record 409 people now in B.C. hospitals fighting the virus, a record 125 are in intensive care units.

Health Minister Adrian Dix said April 15 that the province has a total of 11,939 hospital beds, including new beds created during the pandemic. Of those 8,822 are occupied, for an occupancy rate of 73.9%. There are 780 ICU beds, and 441 are occupied. That translates into a 56.5% occupancy rate.

"The challenge is not equipment," Dix said. "We have a considerable supply of ventilators."

Instead, he said, the concern with increased hospitalization and ICU occupancy is the strain it puts on human resources.

"Hospitalization is now being driven by people between the ages of 40 and 79, and that's why it's so important that we continue to focus our age-based immunization program," provincial health officer Bonnie Henry told media April 15.

"Deaths are pretty much concentrated in the older age group, and they've come down overall with the immunization of older people."

Health officials are monitoring 16,217 people for symptoms because they have had known exposure to individuals identified as having been infected.

Another three people have died while fighting COVID-19 infections in the past day, raising B.C.'s death toll from the disease to 1,524.

Henry reiterated that the province is changing the way that it reports the number of mutant variants, and that researchers will be doing less genome sequencing on positive COVID-19 samples that have been detected via PCR tests to be one of the variants of concern.

She said officials know that variants, such as the B.1.1.7 strain first detected in the U.K., are present in B.C., and that B.1.1.7 is dominant in the Fraser Valley.

Instead, researchers doing full genome sequencing on other positive COVID-19 samples as a way to ensure that they are not missing out on detecting new potentially harmful variants.

She said that province-wide, the P.1 variant, first detected in Brazil, and B.1.1.7 are each approximately half of all of the cases of variants of concern in the province. The B.1.351 variant, first detected in South Africa, is a comparatively small 1% of variant cases. About 60% of all positive COVID-19 cases in Fraser Health are the B.1.1.7 variant, whereas about 70% of the positive COVID-19 cases in Vancouver Coastal Health are the P.1 variant.

She said that exact figures for variants are "estimated."

One person died after having had a dose of vaccine. That person was older than 100 years old, and in a long-term care home. It was not clear that the person contracted COVID-19 after the vaccine was administered, she said.

That translates into a record 45,031 new doses of vaccine provided in the past 24 hours to a record 44,952 people, with 79 people getting needed second doses.

Henry said there were no new COVID-19 outbreaks at seniors' homes or in hospitals.

The outbreak at Chartwell Langley Gardens has been declared over.

That means that there are now six active outbreaks listed as being at long-term living or B.C. seniors' homes. They are:
• Acropolis Manor in Prince Rupert;
• Cottonwoods Care Centre in Kelowna.
• Dufferin Care Centre in Coquitlam;
• Joseph & Rosalie Segal & Family Health Centre;
• Longlake Chateau in Nanaimo; and
• Sunset Manor in Chilliwack.

The latest epidemiological modelling report said that if people do not reduce their number of contacts, the number of new infections could rise to 2,000 per day, by next month.