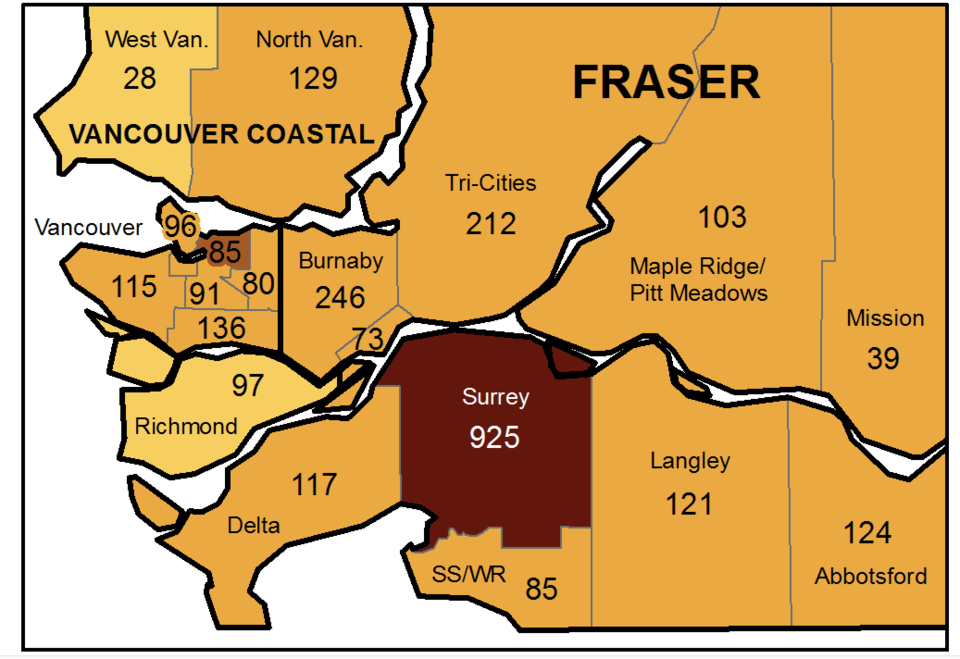 A map shows the geographical breakdown of new COVID cases reported in the Lower Mainland for the week ended March 13.BC CDC

The number of new COVID cases on the North Shore has remained stubbornly high for another week.

There were 157 new cases of coronavirus in the week ending March 13, according to information released by the B.C. Centre for Disease Control, the same number of new cases reported the previous week.

That’s the highest it’s been since the province began providing that information in December. It’s also similar to the number of new cases reported during an uptick in mid-February.

The new cases come as families on the North Shore began spring break this week with over a dozen new exposure warnings from the last week of school. Some children will now be spending their spring break self-isolating at home.

Rates of infection on the North Shore are similar to other communities in the Lower Mainland where cases have remained high during the past month.

COVID infections in Whistler, which spiked in January and the first part of February, remained steady at 32 cases for the week ended March 13 – similar to the week before.

There have been over 700 cases of coronavirus in Whistler since Jan. 1, mostly in young adults. This week Vancouver Coastal Health announced it is beginning vaccinations of young workers in Whistler Blackcomb staff housing and in high-density living situations as part of its plan to target workplace outbreaks.

Numbers of COVID cases continue to be low in other parts of the North Shore-Coast Garibaldi health region. On the Sunshine Coast, six cases were reported and in Powell River there were no cases in the week ending March 13.

Surrey remains a hot spot in the Lower Mainland, with 925 cases reported in the past week.

Positivity rates for COVID-19 tests are now hovering between six and seven per cent in the Vancouver Coastal Health region, which includes the North Shore, and have been creeping up since the end of January.

Dr. Bonnie Henry, the province’s medical health officer, has said recently the virus is being spread primarily by younger adults through small social gatherings as well as through some workplace outbreaks.

This week, vaccination clinics began for seniors, including those on the North Shore. But younger people – who are most likely to be spreading the virus – are not yet eligible for the shot.

Prior to school spring break, Henry announced that gatherings of up to 10 people will now be allowed in B.C., outdoors only. Other restrictions remain in place.

“This is slowly turning the dial. It’s not flicking the switch,” she said.

From the beginning of the pandemic to the end of February there were 2,487 cases of COVID on the North Shore, including 1,792 cases in North Vancouver and 695 cases in West Vancouver.

Henry presented information Thursday showing COVID was the eighth leading cause of death in B.C. in 2020.

B.C. had recorded a total of 89,427 cases of coronavirus as of Thursday, with 4,851 active cases.  In the Vancouver Coastal Health region, there were 1,271 active cases.