Phone bookings for vaccines speed up this week for North Shore seniors over 80
Mar 16, 2021 4:00 PM By: Brent Richter, Jane Seyd 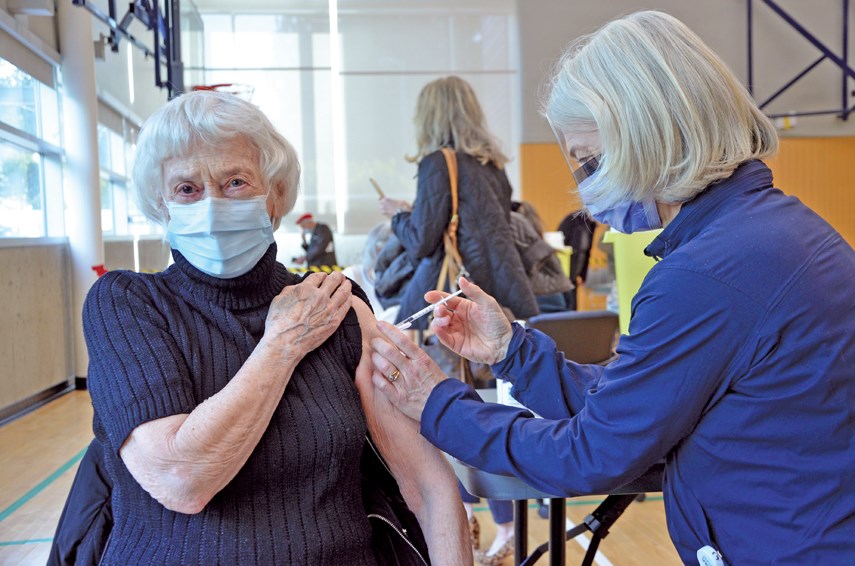 Shelagh Derbyshire receives a dose of the Pfizer vaccine from her daughter Karen Dunn, a public health nurse, on Tuesday at the West Vancouver Community Centre clinic. Brent Richter

Editor's note: this story has been amended since first posting.

After months of waiting, the first community vaccination clinics opened Tuesday on the North Shore. Seniors who had booked appointments lined up for their shots at the Lloyd Avenue COVID testing site in North Vancouver and the West Vancouver Community Centre.

Shelagh Derbyshire, 90, had the privilege of receiving her first dose of the Pfizer vaccine from her daughter Karen Dunn, a public health nurse. It was the first time they’d had any physical contact in a year.

Derbyshire said she’s looking forward to having more independence, especially the freedom to peruse the shops on her own, visit with family and - hopefully soon - attend mass. “I feel relieved,” she said, noting she lives in a building with many other seniors. “We’re all being extremely careful.”

Before administering a shot to nonagenarian Zoltan Kiss, nurse Karon Carleton ran through a list of standard questions and a speech she may have improvised herself.

“Now, you can’t go and party tonight. You have to wait two weeks to party,” she said, prompting a chuckle from the 97-year-old. “And you still have to abide by all Dr. Bonnie’s rules.”

Kiss and his wife Jytte left with their “golden tickets” – yellow slips that prove they’ve had their first dose and telling them when they should seek out their second one. They were feeling well enough to walk home after.

Jytte, 89, said she was looking forward to seeing their grandchildren and friends and she is planning on a special martini to celebrate.

Derbyshire has a bit of advice for anyone feeling hesitant about getting their vaccination. “I would say trust the medical people. They’re not trying to harm you. They’re not going to give you anything except what is good for you,” she said.

Phone bookings accelerated for seniors over 80

After a rocky start in the first days of the phone booking system for appointments, Vancouver Coastal Health announced it was speeding up the process, opening the phone lines to more seniors every day. By Tuesday, those 83 and older could book appointments, and by Wednesday, anyone 82 and older will be eligible. On Thursday, 81-year -olds can book and by Friday, those 80 and older will be eligible to call. The number to phone is 1-877-587-5767.

Michael La Brooy, a North Vancouver senior who turns 86 this week, began calling on the morning his age group was eligible. After two hours of calling every 15 minutes he was able to make an appointment for April 5 at the West Vancouver clinic. La Brooy said he was slightly surprised his appointment was still three weeks away. Other friends of similar age in Richmond managed to get appointments in under a week, he said. Still,  “It’s three weeks, not three months,” he said.

Both the wait time for appointments and the days and hours clinics are open vary considerably.

On the North Shore, the West Vancouver Community Centre clinic was scheduled to be open Tuesday to Friday this week.  In North Vancouver, only one day of vaccinations was originally scheduled this week – on Tuesday. A second clinic day on Thursday has since been added to the schedule.

Bruce Leslie, a West Vancouver resident who walked by the closed West Vancouver vaccine clinic on the weekend, said he hasn’t noticed a real urgency to get vaccinations rolled out as quickly as possible – especially compared to other jurisdictions. Why not have the vaccine clinics running longer hours, including weekends and involve pharmacies giving the shots, he asked.

Vancouver Coastal Health said in an emailed statement it would “closely monitor clinic capacity and will expand operating hours if required.”

Sense of relief for seniors

Getting an appointment for a shot was proving a relief for many seniors and their family members. Laurie Vance and her sister were among those who persevered and got appointments for their parents in West Vancouver – both in their 90s. Although her parents still live independently in their own home, they’ve had to forgo many of their favourite activities over the past year, said Vance, including recreation and visits with family and friends.

“It’s been really tough on both of them,” she said. “I’ve already told my dad I want to book him for a date in three weeks.”

Carleton, a nurse for 46 years, came out of retirement midway through the pandemic to help out in Lions Gate Hospital’s maternity unit. But she jumped at the chance to assist with COVID testing and immunization. Carleton said she’s receiving dozens of calls from health agencies asking if she can come pitch in. “My battery is low on my phone from all the calls coming.”