BERLIN — Germany’s health minister said Thursday that the European Union doesn't plan to order Russia’s Sputnik V coronavirus vaccine but his country will hold talks with Russia on whether an individual order makes sense.
Apr 8, 2021 7:50 AM By: Canadian Press 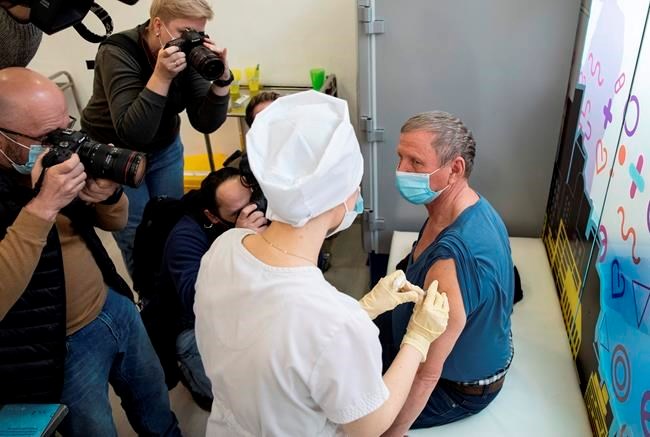 Spahn said he told his fellow EU health ministers that Germany, which has strongly backed joint EU orders, “will talk bilaterally to Russia, first of all about when it could come and in what quantities.” He said “to really make a difference in our current situation, the deliveries would have to come in the next two to four or five months already.”

Otherwise, he said, Germany would have “more than enough vaccine” already.

Amid a slow start to the vaccine rollout in Germany and across the EU, there have been calls from some German politicians — particularly at state level — to order Sputnik V.

Spahn underscored the German government’s position that, to be deployed in the country, Sputnik V must be cleared for use by the EMA and “for that, Russia must deliver data.” The EU regulator started a rolling review of the vaccine in early March.

Elsewhere in the EU, Hungary in February became the first country in the bloc to start using Sputnik V and China's Sinopharm vaccine, neither of which has been approved by the European Medicines Agency, the EU's medicines regulator.

The government of Slovakia collapsed after its former prime minister orchestrated a secret deal to buy 2 million Sputnik V doses, despite disagreements with his coalition partners.

And Chancellor Sebastian Kurz of Austria has said his country is in the closing stages of talks to possibly secure doses of Sputnik V. He has left open whether Austria could authorize its use before the EU approves it.

In Germany itself, two state governments are pushing ahead with tentative plans to secure doses of the Russian vaccine.

On Wednesday, Bavaria’s governor said his administration was signing a preliminary contract with a company that would allow it to get 2.5 million doses of Sputnik V, probably in July, if the shot is cleared by the EMA.

On Thursday, the health minister of the northeastern state of Mecklenburg-Western Pomerania, Harry Glawe, said his state had secured an option for 1 million doses of Sputnik V. He argued that right now Germany has a “great dependency on too few manufacturers,” news agency dpa reported.

Germany is hoping to ramp up inoculations with the vaccines it already has, and many regular doctors' practices joined the campaign this week. Official data showed that over 656,000 doses were administered on Wednesday, compared with at most around 367,000 per day previously.

That means 13.8% of Germany's population of 83 million has now received at least one dose of vaccine, with 5.7% having received both doses.

Meanwhile, a top EU official indicated that he's skeptical about rushing into orders for the Russian or Chinese vaccines.

Thierry Breton, who heads the EU Commission's vaccine task force, said in a blog entry that he has “no reason to doubt the potential effectiveness, safety and quality of vaccines developed outside of the EU” but that is for the EMA to assess.

“Whenever I have been asked to comment on these vaccines, I have done so from an industrial perspective: Can they add to Europe’s portfolio of vaccines and add to our summer 2021 immunity target?” Breton wrote. “I’m afraid the answer is no.”