FREDERICTON — The premier of New Brunswick says he's disappointed to hear some people are still not following public health restrictions more than a year into the pandemic.
Apr 22, 2021 2:00 PM By: Canadian Press 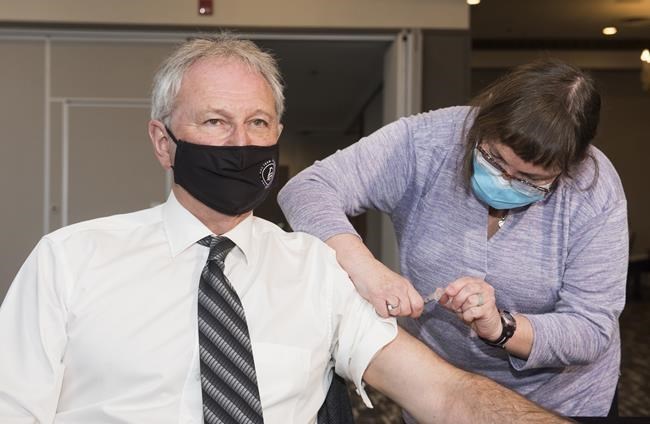 FREDERICTON — The premier of New Brunswick says he's disappointed to hear some people are still not following public health restrictions more than a year into the pandemic.

Blaine Higgs made the comments at a news conference Thursday, noting that most people are following the rules.

"I have been disappointed by a few stories of people blatantly violating regulations by failing to wear a mask, participating in large gatherings and failing to self-isolate properly when required," he said.

Higgs said a number of tickets were issued for violations this week in the Edmundston region in the northwest of the province where the majority of active cases of COVID-19 are located.

Part of that region, known as Zone 4, has been under a lockdown for the last 12 days, and chief medical health officer Dr. Jennifer Russell said the status of the lockdown will be reassessed on Monday.

"We recognize that Zone 4 has been making progress, and cases are slowly decreasing, but we need to wait a few more days to ensure this trend continues," she said

While 94 per cent of residents in the province's long-term care homes have received their first dose of COVID-19 vaccine, only 47 per cent of staff in the homes have been vaccinated, and Higgs said he wants to see that number higher.

"The residents are protected, but we have to ensure the employees are protected. We need them to protect themselves because they are providing a service to a vulnerable population. They risk infecting others in the community," Higgs said.

By comparison, 84 per cent of other health-care staff such as doctors, nurses and paramedics have received their first dose of vaccine.

Health officials reported 19 new cases of COVID-19 in the province Thursday. There were 11 in the Edmundston region, three in the Saint John area, two each in the Fredericton and Moncton regions and one in the Bathurst area.

There are now 146 active cases in the province and 15 patients are in hospital because of COVID-19, including five in intensive care.

Higgs said with more vaccines on the way for the months of May and June, he's calling on everyone to do their part.

"We need 10 more weeks. The predicted supply of vaccine would see us doing up to 45,000 a week through May and June. This will get us to the levels we need to have summer in New Brunswick," he said.

With new variants of the virus coming from abroad, Higgs called on the federal government to enact tighter border controls.

"At this time, without any doubt in my mind, the international borders to hot zones like India should be closed," he said. "These flights should not continue to come into Canada."

He said the federal government needs to respond rapidly to the situation.

US tribe shares vaccine with relatives, neighbours in Canada
May 5, 2021 3:29 PM