Quebec eases COVID-19 measures in some areas, says wider reopening will have to wait

MONTREAL — Quebec's premier on Tuesday said he will lift emergency measures in some parts of the province next week but vaccination rates have to be higher before a wider return to normal life is possible.
May 4, 2021 3:38 PM By: Canadian Press 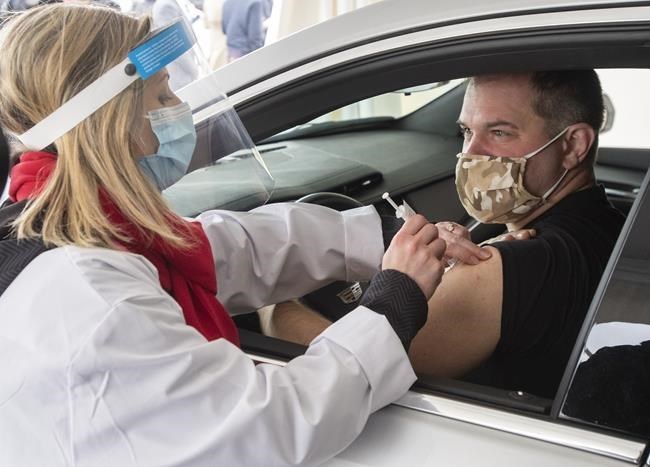 MONTREAL — Quebec's premier on Tuesday said he will lift emergency measures in some parts of the province next week but vaccination rates have to be higher before a wider return to normal life is possible.

The situation has improved enough in the greater Quebec City area to lift the special emergency measures imposed at the beginning of April, François Legault told reporters.

High schools and stores can reopen next Monday and the nighttime curfew will be pushed back to 9:30 p.m. from 8 p.m. in the region, including in Quebec City, Lévis, Bellechasse and Montmagny-L'Islet.

Parts of Chaudière-Appalaches, located south of Quebec City, and Outaouais in western Quebec will move to the red pandemic-alert level, under which non-essential businesses and high schools can reopen. The stricter measures will remain in harder-hit sectors, including the Beauce region south of Quebec City, with an exception for primary schools, which will be allowed to reopen on Monday.

While Quebec's cases and hospitalizations have been stable in recent weeks, Legault said it was too soon to consider a wider reopening because the majority of Quebecers have yet to receive a first dose of vaccine.

"We continue to vaccinate more every day and we're getting closer to normal lives, but if we want to get there, we must lift the restrictions gradually and at least 75 per cent of Quebecers over 18 years old need to be vaccinated," he said.

Later in the news conference, however, Legault said reopening also depended on other factors such as hospitalizations, adding he hoped to lift some restrictions before the 75 per cent target is reached.

He said it was possible that some red zones could be downgraded to orange in the coming weeks, which would mean restaurants could reopen.

Public health director Dr. Horacio Arruda said the government is evaluating what conditions need to be met before spectators can return to sports venues such as Montreal's Bell Centre.

The province has vaccinated just under 38 per cent of Quebecers with at least one dose. Vaccine appointments are available to members of the general public who are 45 and up, with the age limit set to drop to 18 by mid-May.

Earlier on Tuesday, Quebec health officials unveiled the city's first drive-thru COVID-19 vaccination site in a parking lot at Montréal-Trudeau International Airport. Health Minister Christian Dubé was on hand, as regional health authorities demonstrated how people will be vaccinated without leaving their car.

The operation is expected to be running by May 17, administering 4,000 shots per day, and it could serve as a blueprint for similar sites elsewhere in the province.

Dubé said people are eager to get vaccinated, adding that each time the province lowers the age eligibility, appointments are quickly scooped up. With two million Pfizer-BioNTech doses expected in May alone, Dubé urged as many Quebecers as possible to get a shot this month.

“If we can vaccinate two million people in May, it means we could accelerate the second dose, which was due after June,” Dubé told reporters at the airport.

Dubé later reported on Twitter that across Quebec, 75 per cent of people age 55 to 59 have made appointments for their first doses, meeting the province's target for the age group. He said, however, Montreal was still 10,000 bookings short of the goal.

Quebec reported 797 new cases of COVID-19 Tuesday as well as 16 more deaths attributed to the novel coronavirus. Hospitalizations increased by six, to 594, while the number of people in intensive care rose by four, to 155.

Arruda said the province's immunization advisory committee will announce its strategy for using the one-shot Johnson & Johnson vaccine in the coming days.

Canada's National Advisory Committee on Immunization said Monday the vaccine should be offered only to those 30 and over who don't want to wait for a shot of either Pfizer-BioNTech or Moderna, which the committee said are preferred over the Johnson & Johnson or Oxford-AstraZeneca vaccines because they don't carry the remote risk of blood clots.

Dube said Tuesday the 500,000 doses of AstraZeneca the province received have helped it fight off the third wave, but added that Quebecers 45 and up have always been given the option to choose that vaccine or to wait for another.

Arruda suggested a similar option would be given to those deemed eligible for the Johnson & Johnson vaccine.

This report by The Canadian Press was first published May 4, 2021.

Note to readers: This is a corrected story. A previous version stated incorrectly that high schools and non-essential businesses in parts of Chaudière-Appalaches and Outaouais will remain closed.