The ruling will likely have significant impacts for industries in that region, notably the natural gas industry, as the court says the province may no longer authorize activities that would continue to add to the cumulative impacts that breach Treaty 8.

Blueberry River First Nation (BRFN) territory is in the Fort St. John area, which is in the heartland of B.C.’s natural gas industry.

“The province is no longer permitted to authorize industrial development in a way and scale that continues to infringe our rights without our input or taking into account the cumulative effects on our treaty rights,” the First Nation said in a released statement Wednesday, after the ruling came down June 29.

The BRFN is one of the few First Nations in B.C. that signed an historical treaty – in this case, Treaty 8.

The cumulative impacts of all that activity constituted a breach of treaty rights, the First Nation argued, and BC Supreme Court Justice Emily Burke has upheld that claim.

One example of the cumulative impacts is declining caribou populations. Burke accepted expert witness testimony that "anthropogenic disturbance, including industrial disturbance, has largely caused or contributed to that decline."

In her ruling, Burke notes that the Crown may justifiably infringe treaty rights through the “taking up” of lands for things like building roads, mines and industries deemed to be in the public good. But there is, or should be, a limit, Burke found.

“I recognize that the province has the power to take up lands,” she writes in her 512 page ruling.

“This power, however, is not infinite. The province cannot take up so much land such that Blueberry can no longer meaningfully exercise its rights to hunt, trap and fish in a manner consistent with its way of life. The province’s power to take up lands must be exercised in a way that upholds the promises and protections in the Treaty.

“I find that the province’s conduct over a period of many years – by allowing industrial development in Blueberry’s territory at an extensive scale without assessing the cumulative impacts of this development and ensuring that Blueberry would be able to continue meaningfully exercising its treaty rights in its territory – has breached the Treaty.”

Typically, when a government has been found to have infringed a treaty right, the First Nation must be compensated somehow, often with cash or land or both. But the BRFN were not asking for compensation – they were asking for a halt to all further development.

Burke has granted that in her ruling. Her orders include:

“The province may not continue to authorize activities that breach the promises included in the Treaty, including the province’s honourable and fiduciary obligations associated with the Treaty, or that unjustifiably infringe Blueberry’s exercise of its treaty rights.”

That doesn’t necessarily mean the province can’t still approve industrial activity, but it can only do so with the approval of the First Nation, and in a way that does not infringe their treaty rights. This will require changes to various provincial land and resource regulations.

Burke is suspending  her order forbidding the authorization of industrial activities for six months to allow the province and First Nation time to “expeditiously negotiate changes to the regulatory regime that recognize and respect treaty rights.”

She further orders both the B.C. government and First Nations to “act with diligence to consult and negotiate for the purpose of establishing timely enforceable mechanisms to assess and manage the cumulative impact of industrial development on Blueberry’s treaty rights, and to ensure these constitutional rights are respected.”

It's unclear whether the ruling will have implications for the Site C dam project on the Peace River or related infrastructure like transmission lines, which are projects that are already approved and under construction. The BRFN were among a number of First Nations that had attempted to halt Site C, but their application for an injunction failed.

In a statement to the Alaska Highway News, the ministry of Indigenous Relations and Reconciliation acknowledged the importance of the landmark ruling.

"This is a significant ruling and we will be working to determine the province’s next steps once we’ve had a chance to review what the judge has said," the minstry said in its statem,ent.

"The written decision is long and complex but in light of the significant implications, we recognize the urgency. This work is a priority, given the timeline established by the court."

Read the full BC Supreme Court ruling below: 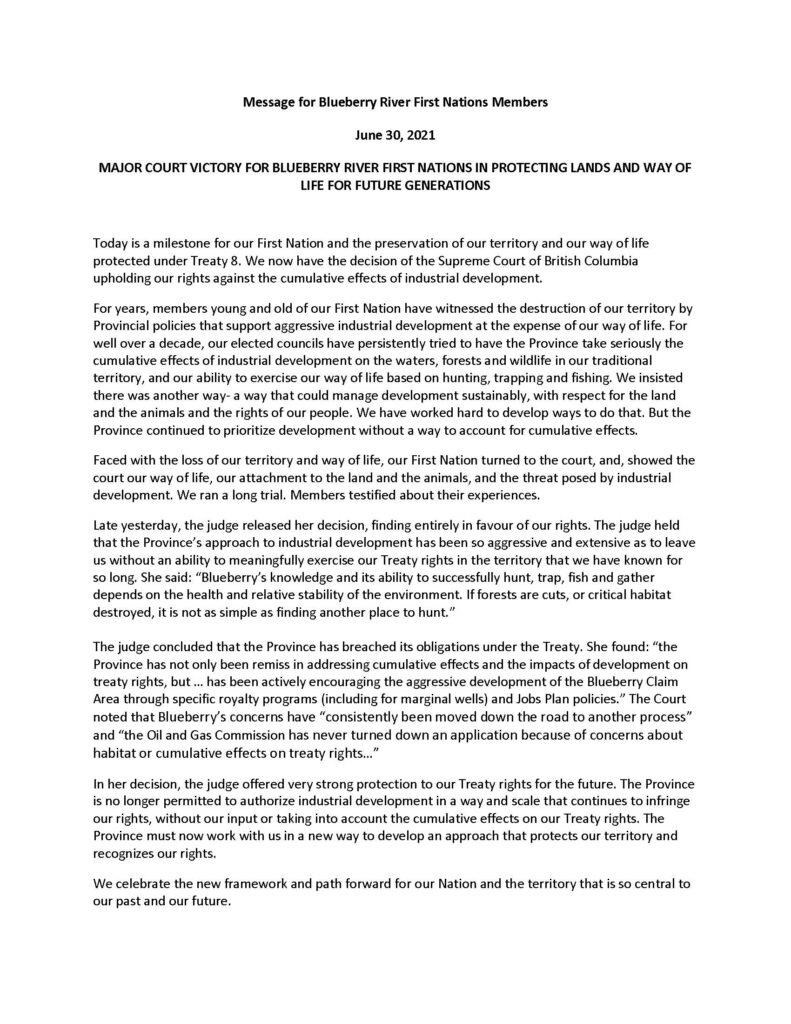 — With files from Alaska Highway News

Blueberry River takes cumulative impacts lawsuit back to court
May 24, 2019 10:03 AM
Comments