Carnival of Hope brings in over $10K

Hundreds of supporters turned out on Saturday to the Carnival of Hope, put on as a fundraiser for the Fort St. John branch of the Canadian Cancer Society. The goal to raise $10,000 was surpassed, and more donations are still coming in.
Jun 14, 2016 4:33 PM By: Zoë Ducklow 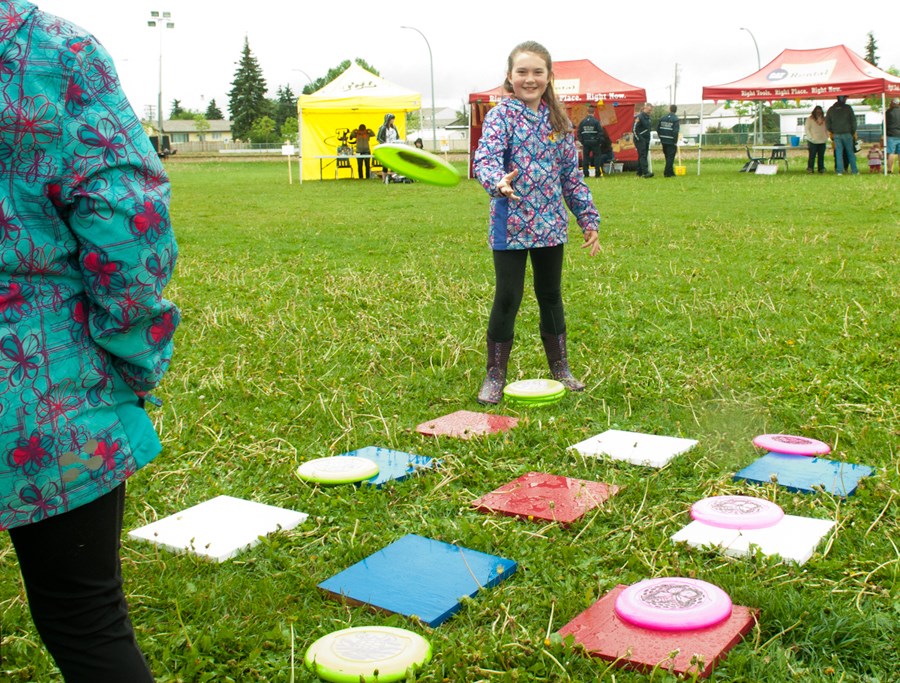 A carnival-goer plays Frisbee tic-tac-toe, one of the Carnival of Hope games. The rain didn’t stop people from coming out, organizer Brenda Baumeister said. “Kids were out there in their little mud suits. It was great.”Zoë Ducklow

Hundreds of supporters turned out on Saturday to the Carnival of Hope, put on as a fundraiser for the Fort St. John branch of the Canadian Cancer Society.

The goal to raise $10,000 was surpassed, and more donations are still coming in. The funds are earmarked to help Fort St. John residents with cancer for things like traveling for treatment, support groups, and wigs.

“Considering it rained, I think it was amazing,” said Brenda Baumeister, who spearheaded the event. “We want to say a huge thank you to everyone who came out.”

Eighty-something volunteers came to run games and help organize the event. Lisa Behrens volunteered with Baumeister to put the carnival together. The two have been working their social networks for months to gather volunteers and arrange all the logistics of an event like this one. There were over 20 tents with carnival games, food vendors, an outdoor movie screen, and a sound system that covered the whole school field.

Baumeister has organized the Relay for Life over the past five years. This year she wanted to do something different where families could come have fun together.

“Family is more important than ever. We need a place to get families together to have fun,” Baumeister said.

The Relay for Life is a worldwide fundraiser for the Canadian Cancer Society. There are rules and guidelines to keep it consistent from event to event, but the regulations can make it probative for small towns. A number of towns in B.C. have stopped running the Relay in favour of independently organized events where there is freedom to run the event as makes sense for the community.

For Bauemeister, the Carnival was a way to get families together while also having a certain day to celebrate survivors and remember those who have passed away.

“It’s a day where we can honour survivors for their incredible bravery and strength. And it’s a time where we remember those who passed away. It’s important to have a special day where we can do this,” Baumeister said.