Hundreds gathered at 100 and 100 in Fort St. John Friday evening to mourn and honour the memory of the 215 children found buried on the site of the former Kamloops Indian Residential School.

They wore orange and sang songs and played drums, joining communities across Canada that have poured out their grief and anger over the discovery.

“If it wasn’t for the bravery of the Kamloops Indian Band to go and search for their own children, and get the equipment that was needed to find them, we wouldn’t have had this discovery that has made international news,” said Connie Greyeyes, an organizer of the ceremony.

“We would not know that those 215 children were buried less than 200 yards from where we gather and celebrate our traditions and our culture. It is horrific, and if you’re not horrified by that I don’t know how you can be a human being in this world.”

The Tk’emlups te Secwepemc First Nation announced last week that ground-penetrating radar had located what are believed to be the remains of 215 children in an unmarked burial site on the grounds of the former residential school.

The school operated between 1890 and 1969, when the federal government took over operations from the Catholic Church and operated it as a day school until it closed in 1978.

The National Truth and Reconciliation Commission has record of at least 51 children dying at the school between 1914 and 1963. The commission noted in its 2015 report that officials in 1918 believed children at the school were not being adequately fed, leading to malnutrition.

At least 4,100 children died at the schools. 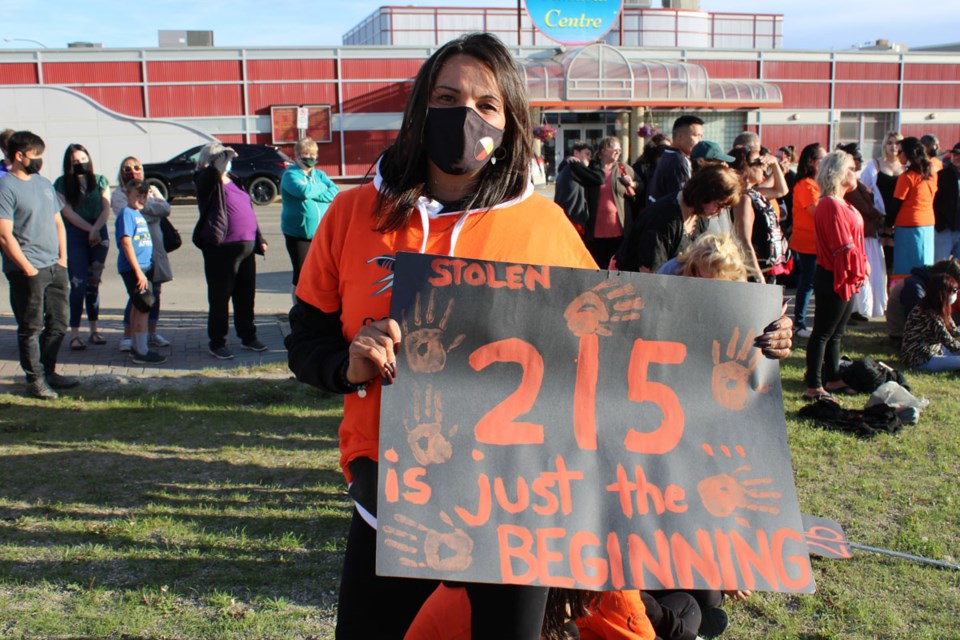 Brittany Knott holds up a sign in memory of the 215 children, with the message that more will be found. . By Tom Summer

“We need non-indigenous people to understand what happened,” said Greyeyes. "It goes right back to when they took our children from us and made them go to these prisons. I don’t want to call them schools.”

Garry Oker of Doig River First Nation spoke in his Beaver language, reminding the crowd to practice kindness as drummers opened the vigil with a prayer song.

“Be kind – no matter what people do,” said Oker.

“The great Tommy Attachie told me about that. He said 'No matter what - even if people are against you or are pushing in opposite directions, you still have to be kind to people'. It's like the idea of water, it only flows one way. We are all like water, we go one in direction." 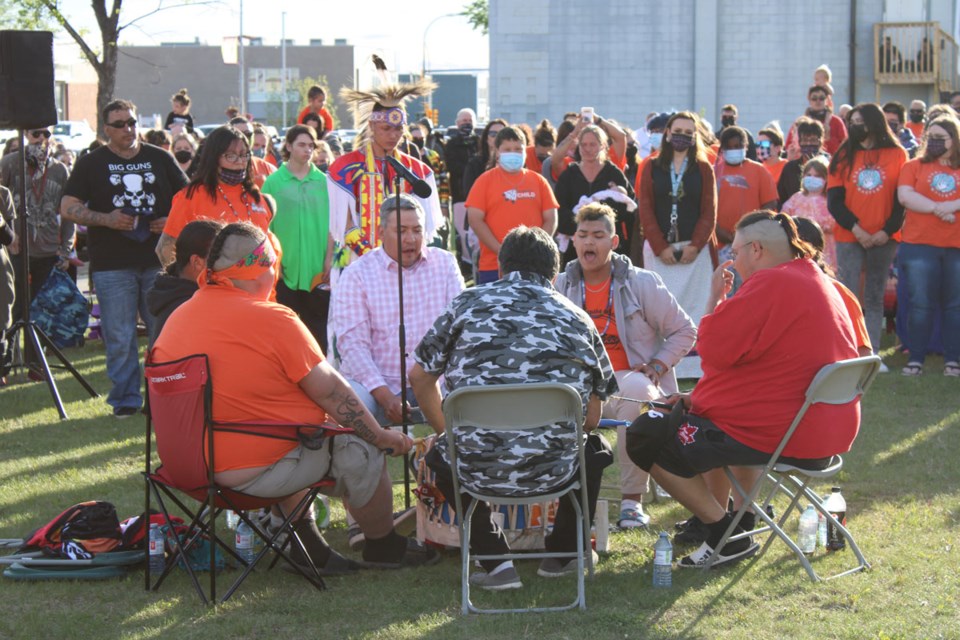 The Truth and Reconciliation Commission operated between 2008 and 2015 and provided Indigenous people directly or indirectly affected by the residential school system with an opportunity to share their stories and experiences.

Mayor Lori Ackerman was among the local dignitaries who attended the vigil, and encouraged residents to read the Commission’s 94 calls to action to learn and understand about the residential school system.

“We have come from an uneven past,” she said. “Our children are the most vulnerable amongst us. This is one school — there are many others.”

The Tk’emlups te Secwepemc First Nation says a final report of its investigation should be completed by July 1. 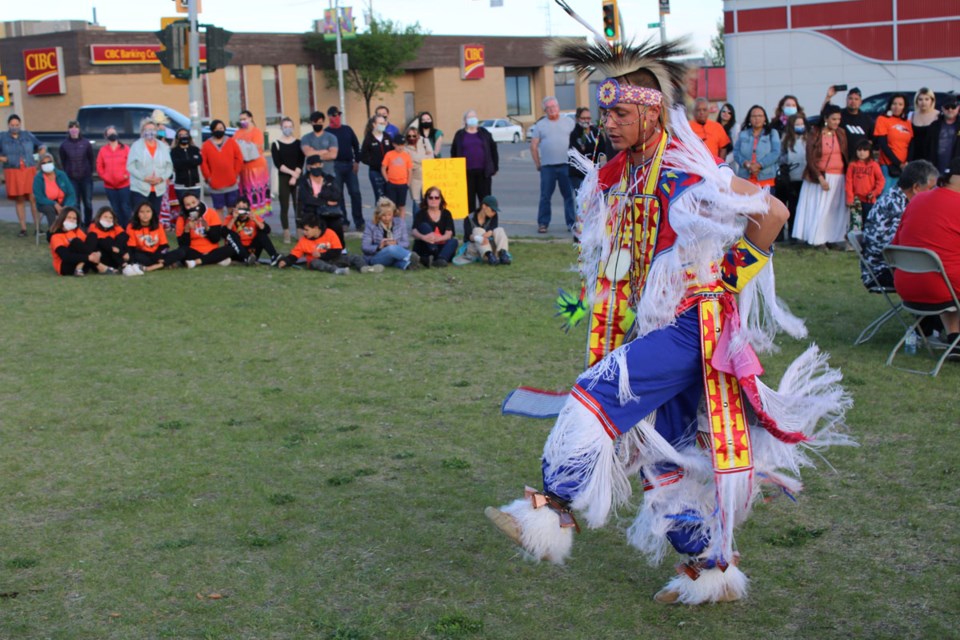 A traditional grass dance was held at the gathering this evening. . By Tom Summer

Mayor Ackerman said at the vigil that the city’s new community foundation will not grant funds to groups with outstanding amends to make for their role in the residential school system. The matter will be coming forward to the next council meeting, she said.

“If an organization or an agency that is applying for funding was part of the residential school system and has yet to make amends, they are not welcome to use our funds,” Ackerman said.

Greyeyes said the community must call out against racism and prejudice when they see it, especially online.

“You have no business standing here with us if you’re not willing to stick up for us. I get tagged in comments on Facebook all the time and every time I go there it’s something ugly, it’s racist, it’s derogatory, it’s disgusting toward our indigenous population and they want me to say something,” she said.

"It’s your place to say something too. You have to stand up to it and you have you stand with us.” 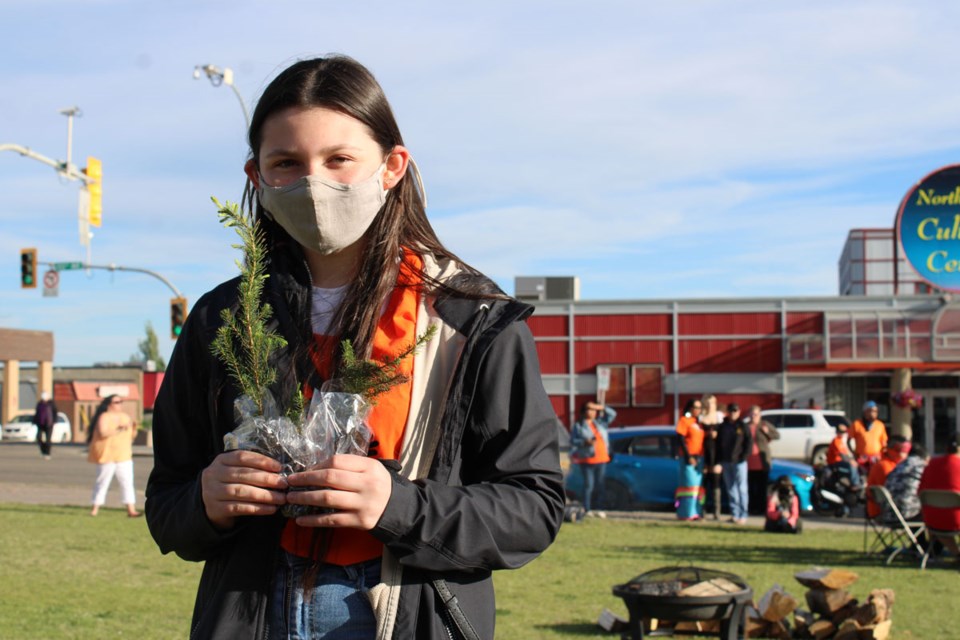 Zoey Mytron helped hand out 215 tree saplings to the crowd, one for each of the missing children. . By Tom Summer