Ducks Unlimited expanded on its plans to restore wetlands in Upper Cache Thursday, with biologist Bruce Harrison presenting a package of information to the Peace River Regional District.

Three small earth dams are proposed on an existing ditch system on private farmland near Highway 29 and Szoo Road, just west of the Attachie lookout and rest stop. While the plan remains unendorsed by directors, the project is planned to offset the loss of wetlands to the Site C reservoir.

“This was once a natural area, very similar to Watson Slough. Over the years it was drained so it makes sense to do a project here," Harrison said.

“The water is already there in most years, it just leaves as the summer progresses,” he added. “So the proposed project would retain that seasonal water which would otherwise pass through the farm and eventually drain down into the Peace.”

Harrison said the wetlands would improve habitat for amphibians and breeding birds, and provide a more secure water supply for cows that use the land for grazing.

Directors remained concerned about who held liability and responsibility for the dams, as well as impacts to neighbouring properties.

Harrison says liability for the project, including monitoring and maintenance, falls to Ducks Unlimited and BC Hydro, with an agreement to build the dams ready but not yet formally signed. An endowment fund would be created to support the project.

“This is what we do for a living and we have staff in the area," said Harrison, noting he was born and raised in Fort St. John. "We’re not going anywhere, we think we’re the best ones to monitor and maintain it. We would just need to make sure the funds are there so that happens over the life of the project." 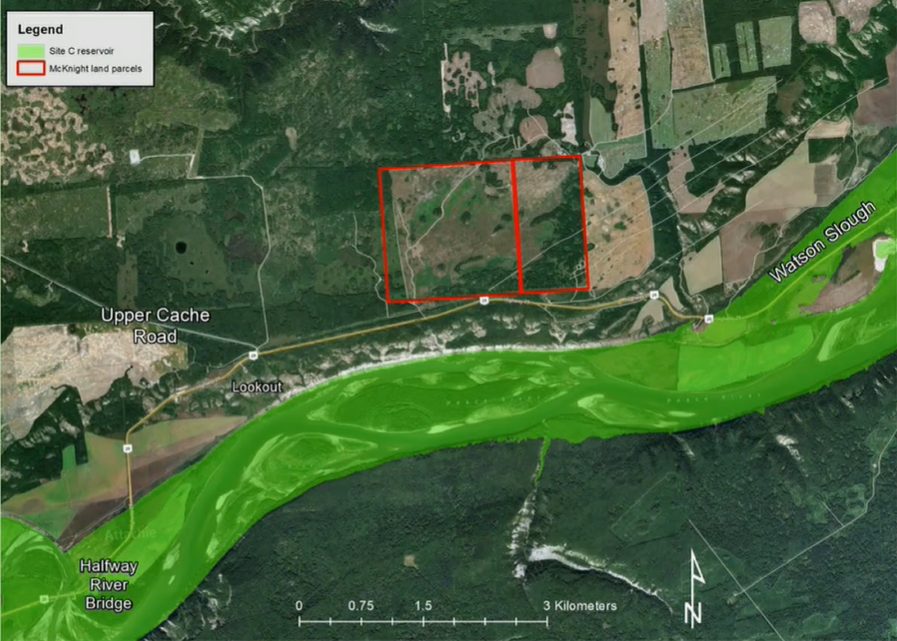 Proposal for restored wetlands at Upper Cache. By Ducks Unlimited

The wetlands would be several hundred feet above the Site C reservoir, and are not designed to not flood neighbouring properties, according to the presentation. Harrison noted the organization has already spoken with two neighbouring landowners about their concerns, and that any impacts would addressed throughout the regulatory process. More meetings with landowners are planned this spring.

“We have to show that the neighbours will not be affected,” said Harrison, who also noted the organization has sufficient liability insurance for the "very unlikely consequences" of a dam failure.

The application to the PRRD was brought forward only to check if there’s any local ban on bringing fill onto ALR land. Rock and other materials to build the dams would come from a nearby quarry, a permitted use on ALR land.

Directors moved to forward the application to the Agricultural Land Commission with no comment or official endorsement, as the project is under provincial jurisdiction as a mitigation measure required due to Site C impacts.

"This is a project created by a provincial Crown corporation that has impacted the wetland that is presently available," Fort St. John Mayor Lori Ackerman said.

Added Area B Director Karen Goodings, “It goes back to the original discussion that we had when they asked me what my thoughts were, and I said no comment. I said no comment simply because near as I can tell it will not get refused.”