Canada’s net debt is now over $1 trillion for the first time ever, with more than $100 million in new spending announced targeting a wide variety of voters and widely viewed as a pre-election platform.
Apr 19, 2021 3:04 PM By: Canadian Press 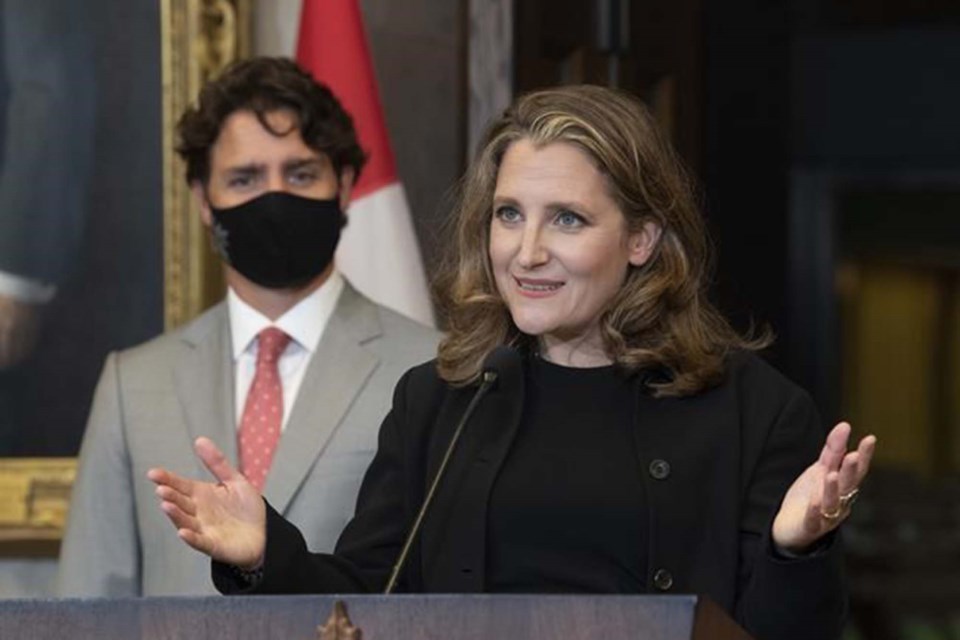 OTTAWA — The first federal budget in more than two years extends Ottawa’s COVID-19 "lifeline" for workers and struggling businesses another few months as it aims to pull Canada through the pandemic once and for all.

Finance Minister Chrystia Freeland’s first crack at a budget plan is also widely viewed as a pre-election platform with more than $100 million in new spending over the next three years targeting a wide variety of voters, from seniors and their caregivers, to parents and business owners.

"This budget is about finishing the fight against COVID," Freeland said, in her budget-day speech. "It's about healing the economic wounds left by the COVID recession. And it's about creating more jobs and prosperity for Canadians in the days and decades to come."

The government will need to get at least one opposition party to support it to avoid a pandemic election this spring.

Canada’s net debt is now over $1 trillion for the first time ever, after a $354 billion deficit for the pandemic year just over. It is expected to keep climbing with deficits of $155 billion this year, and $60 billion in 2022-23.

That is driven in part by more than $100 million in new spending over the next three years, including costs to maintain federal wage and rent subsidies and aid for laid-off workers, until September now, instead of cutting them off in June.

Freeland is also looking ahead to the post-pandemic Canada the Liberals want to see, one that has $10-a-day childcare, the ability to produce its own vaccines, national long-term care standards and small- and medium-sized businesses equipped with the workers and technology they need to survive.

It also includes a greener, cleaner Canada, with a promise of more than $17 billion in climate change programs, much of it in the form of incentives to encourage heavy industry to curb their emissions and grow Canada's clean technology sector.

All of it comes with a pandemic-sized asterisk that things could still change drastically if vaccine supplies are delayed or they prove not to work that well against emerging variants of the virus. The budget includes alternative scenarios that show where the fiscal picture might go if the worst-case scenarios of the pandemic play out.

Those risks seem even more real as the country is battling the worst wave of the pandemic yet with record hospitalizations and patients in critical care, and doctors and nurses warning repeatedly of a health care system on the brink of collapse.

Freeland acknowledged the weight the pandemic continues to bear on Canadians.

"We are all tired, and frustrated, and even afraid,” she said. "But we will get through this."

The pandemic has thrown everything off course for more than a year, including the plan the Liberals intended to use after the 2019 election. For the Liberals first four budgets, every one went with a title about the middle class — growing it, investing in it, making it stronger.

This time, Freeland — who is making history as the first female finance minister to table a federal budget — went with "A recovery plan for jobs, growth and resilience."

That plan focuses on helping some of those hit hardest in the last year — sectors like tourism, as well as low-wage workers, small and medium-sized businesses, women and young people.

This report by The Canadian Press was first published April 19, 2021.