Following is the first in a series highlighting planned or needed infrastructure upgrades in the North Peace. Future articles will examine everything from new schools to commercial developments
Dec 2, 2014 9:34 AM By: David Dyck 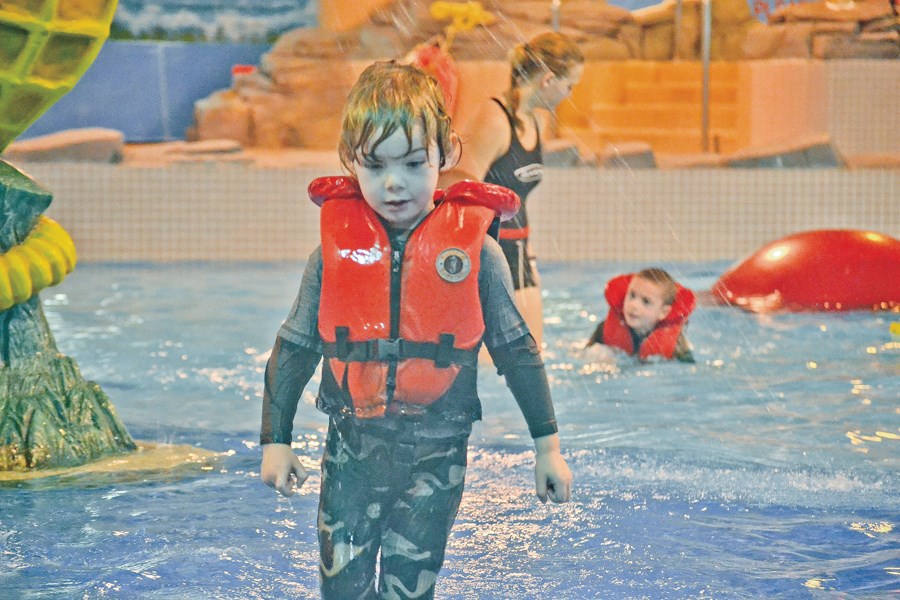 Wynn Marshman, 3, takes swimming lessons at the North Peace Leisure Pool last month. The pool was closed for an extended period this year for repairs. PRRD Director Arthur Hadland said the facility would have to be replaced in the "within the next ten years" as it inches closer towards the end of its 30 year lifespan.

The extensive renovations and repairs of the North Peace Leisure Pool this fall has made it abundantly clear: a new facility is going to be required in the not-so-distant future.

The 18-year-old facility was built with the expectation that it would last around 30 years, meaning that it will likely have to be replaced in the next 12 years. Maybe even sooner, said Peace River Regional District (PRRD) Director Arthur Hadland.

“Within the next ten years, I suspect that it will happen, it will have to happen,” he added.

But what that facility will look like and how much will be spent on it still has to be decided. A fund has been set up for the pool’s replacement, and so far $572,000 has been set aside for that purpose, but there isn’t enough money in the budget every year to earmark for the new pool.

Any decision about gathering more funds will have to come from the community itself, said Hadland. “There is quite a bit of interest in having a new facility,” he said.

“We’ve had the swim club come and approach us and we’ve had some free ranging discussions about that but it isn’t right in front of us because we would have to go out to the community and they would have to give approval.”

Areas B and C of the district own two-thirds of the facility, while the city of Fort St. John owns the remaining one-third.

It would likely mean a tax hike for residents, based on what is wanted and needed.

As the tax rate stands now, someone living in Fort St. John who owns property valued at $305,000 pays about $100 a year in tax for the facility.

The city and district are currently undertaking a research project into long-term recreational needs of the region, and a plan for the pool will come out of that.

Hadland said he’s confident that the growing community will want a new facility sometime soon, with around 18,000 people in the city, 7,000 in the near vicinity, and 5,000 in the outlying areas.

“Looking ahead we have to keep growing and changing,” said Hadland.

He said that what he is hearing personally from the electorate is that they would like to see the district ensure “hard needs” like roads, water, sewer and health are taken care of before investments are made in recreational needs.

On the other hand, facilities like the pool are a way to attract professionals to the area.

“It’s an attraction for the community. I remember one medical practitioner, his kids were part of the swim club,” he explained. “That is the larger view that we have to have in order to attract the high end people to look after health, for one.”