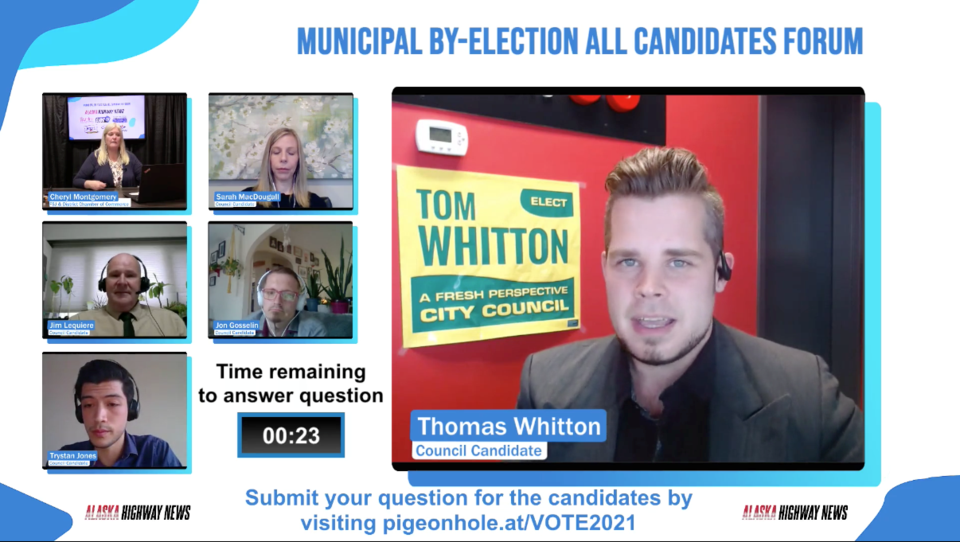 Fort St. John saw a mini-building boom downtown in recent years. From 2015 to 2017, six new office, restaurant, and shop projects accounted for $10.8 million in construction. Still, there are many lots downtown sitting vacant and undeveloped, many of them owned by the city.

City council byelection candidates were asked at the All Candidates Forum whether they think downtown is thriving, and what they think the city should be doing to incentivize the sale and development of downtown land.

Here are their responses:

Jim Lequiere: We need to find partners, investors that are willing to build on those big vacant lots downtown, like 100th and 100th, or the Condill lot, and across from the Lido Theatre. We need structures, in my opinion, that have restaurants and delis and stores on the bottom, along with offices on the second floor, and I’d also like to see some condo suites on the third floor with balconies.

The city has an economic development group and I think they should be laser-focused on getting investors downtown. There's that old saying build it and they will come, and I most definitely want to see those big lots [developed] particularly now that borrowed money is so cheap. Of course, building materials are a lot more expensive now, but yes we have to fill those lots.

Tom Whitton: Do I think downtown is thriving? No. I made a post on Facebook the other day about the most exciting thing downtown being the piano. We definitely need a revitalization, we need some changes.

The first thing we need to do is start working with investors. We need to get people interested in Fort St. John and we need to be championing them, just like we did with the doctors, all those types of programs we’re struggling on. We need to go out there, we need to find them, we need to show them this is the place that they want to invest their money.

Then we need to work on streamlining the permitting process. That goes back to cutting red tape. Then we need to do incentives. Incentives are so important. If you fit our mandate, if you’re fitting what we’re looking to build, we will possibly look at two or three years of taxes, whatever it might be, whatever those incentives look like, maybe we put a nice sign up. We have the people, we have the capability, we can do it.

Jon Gosselin: The downtown core definitely needs some upgrading. Those empty lots are quite an eyesore and I don’t think anyone would disagree with me on that.

I would definitely agree with Jim. One of the things I was talking with some people about the other day was how we could have say the old hospital where we could build a big office suite there, where we had retail and restaurants on the bottom, and offices on top. I didn’t think about the suites on the third or fourth floors, but it’s definitely a good idea.

We do need to get investors involved. We have to make sure that we are cutting red tape that we’re making everything easier because we live in a world now if it’s not streamlined it doesn’t work. We do have to do that, and create some more parking spaces, and just make it more easier for people to walk around downtown.

Sarah MacDougall: I sadly also do not believe that our downtown is thriving and it really has the potential to. We have some great local shops, restaurants, and amenities already down there but we need to fill those brownfield lots in.

I think as we move forward with the 100 Street action plan that is going to be a great start. As we slow people down and make the downtown a vibrant destination, developers are going to want to get in on that action. They’re going want to build new shops, new services, and also places for people to live because we do know that young professionals, or folks without children, or older people on the brink of retirement want to live, work, and play in the same neighbourhood.

As we develop that downtown, the developers will come and we can use cutting development cost charges or other tax incentives to promote them to come as well.

Trystan Jones: I think the downtown core is definitely in need for some revitalization. This is something I’ve thought a bit about already. One thing I do know that the city does have in place some tax exemption programs as well as a reinvestment fund.

One of the best ideas that we could be doing is partnerships similar to what we’ve seen here in Vancouver at the Senakw development. That is a partnership with the Squamish, Musqueam, and Tsleil-Waututh nations to redevelop and create a mixed-use and  sustainable neighbourhood.

That may be ambitious for Fort St. John, however, I do think we can take inspiration by partnering with our local indigenous communities to create not only cultural sensitive locations for them, but as well as create economic and social development, whether that’s through shops, boutiques, and services with mixed use development, so condos and buildings on top to create more sustainability.

Watch a replay of the May 3 All Candidate Forum below:

Voting will take place at the Pomeroy Sport Centre May 15, with advance voting opportunities May 5 and May 12.

A special voting opportunity will take place May 15 at the Fort St. John Hospital from 1:30 to 3 p.m.

The new councillor will take their Oath of Office on May 25.

Fort St. John byelection: What should the city be doing to shrink the nursing shortage?
May 5, 2021 3:23 PM