Latest round of crews deployed to Falkland, Oliver this week

Charlie Lake volunteer firefighters Jason Mukjiha and Kyle Winters began an eight-day rotation on Tuesday to help fight a fire near Falkland, a town midway between Kamloops and Vernon, according to the Peace River Regional District, and are relieving a first crew sent in early August.

Captain Ryan Tancock and firefighters Ryan Bowie and Leo Sullivan were among the first crew deployed July 24, according to Fire Chief Darrell Blades.

Blades said the Fort St. John firefighters are gaining valuable experience working with multiple agencies as well as their counterparts from around the world in different emergency situations.

“Our wildland crews have been working with different fire departments from across the province as well as different agencies and had the opportunity to work with the wildland firefighters from Mexico,” Blades said. “The experiences gained through these deployments allows our staff to bring back new information or different ways to approach things along with best practices that can be used to improve our services to our community whether through frontline tactics or Emergency Centre Operations.”

Said Charlie Lake Fire Chief Ed Albury of his volunteer firefighters, “The crew performed exceptionally well in challenging circumstances. They are pleased that they could help out communities that are in dire need of assistance.” 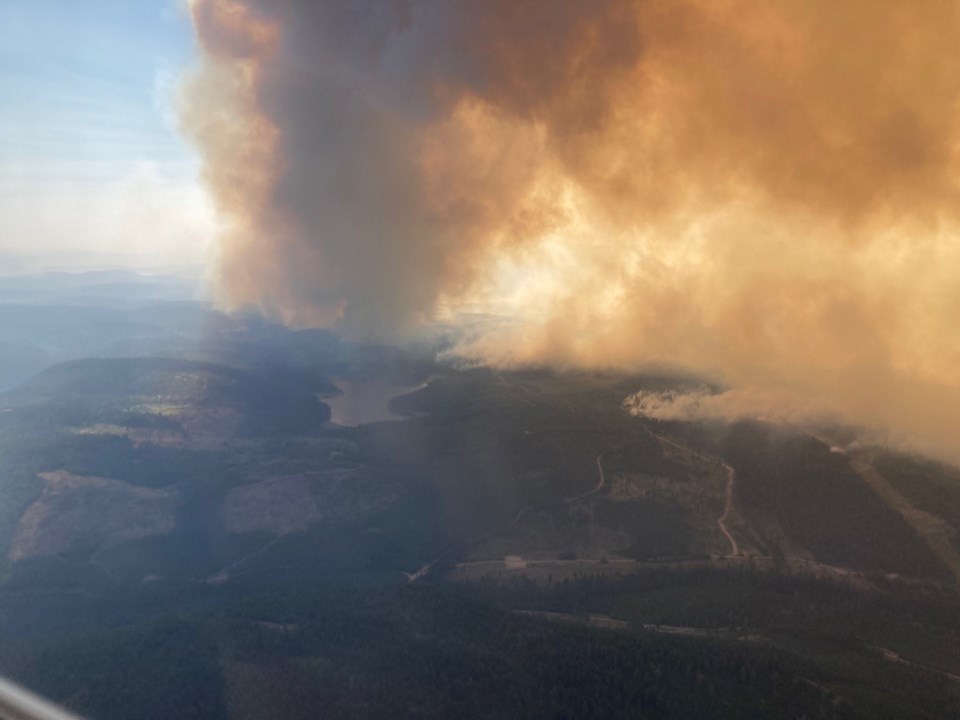 The White Rock Lake fire near Falkland is at an estimated 58,000 hectares and is listed as out of control. The fire had put the community on evacuation order, however, that has been rescinded. There are 314 wildland firefighters and structure protection personnel assigned to the fire, as well as 15 helicopters and 73 pieces of heavy equipment, according to the BC Wildfire Service.

The Nk'Mip Creek wildfire is an estimated 17,472 hectares and still listed as out of control, with a number of evacuation orders and alerts still in effect for the Osoyoos Indian Band, the Kootenay Boundary Regional District, and the Regional District of Okanagan Similkameen. The BC Wildfire Service says 98 Mexican firefighters continue to work within high priority areas of the fire in the south and east areas. 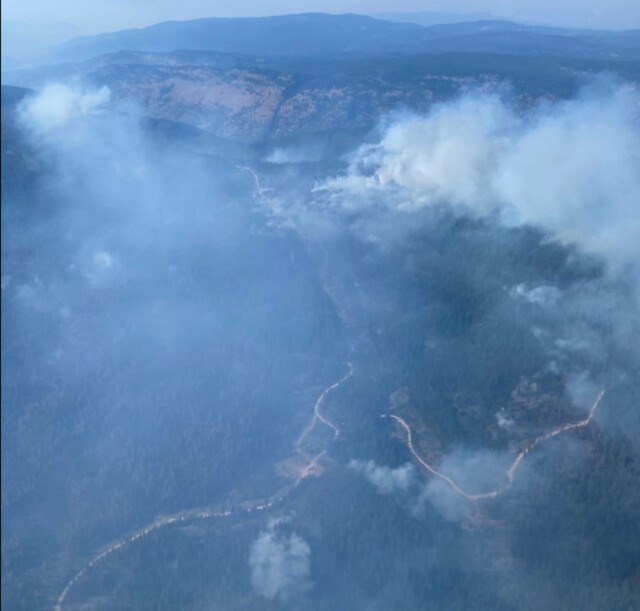 Retardant lines at the Nk'Mip Creek Wildfire. By BC Wildfire Service

Fort St. John has also sent its wildland brush truck to assist with the wildfire response while the PRRD has authorized the use of one of Charlie Lake’s water tankers.

Fort St. John Deputy Fire Chief Robert Norton was also deployed to Williams Lake for a 10-day shift to help the Cariboo Regional District in its emergency operations centre as the Operations Section Chief, said Blades. Norton has returned and the fire department has additional city staff on call to assist in other emergency centres if requested, he said.

Blades noted the province manages structural protection resources for all wildfires across the province, and will assign crews where resources are needed.

“All in all it has been a busy last few weeks in supporting the province in the wildfire fighting efforts and other communities in their emergency programs while ensuring that the City maintains the resources and staffing required here at home,” said Blades.

“On top of the staff deployed across the province our staff that remained here in the community have had to step up and cover shifts, on call assignments and duty chief assignments for those who are deployed. We have also spent a bit of time managing the logistics of deploying staff across the province and maintaining staffing levels here at home. The entire department with the support of the City has done a great job supporting the provincial wildfire response efforts.”

The PRRD says it will send a third crew down south if necessary.

“I’m extremely proud of our Charlie Lake Fire Department volunteers, and I thank them for stepping up to support firefighting operations in areas of the province that are, just as the Peace region is, vulnerable to forest fires,” said Board Chair Brad Sperling.