Ripping up 100 Street and starting construction of a new RCMP detachment makes up more than half of Fort St. John's proposed capital budget for 2020. Council will get its first look at the draft $63.2 million budget on Monday afternoon.
Jan 9, 2020 3:20 PM By: Alaska Highway News Staff 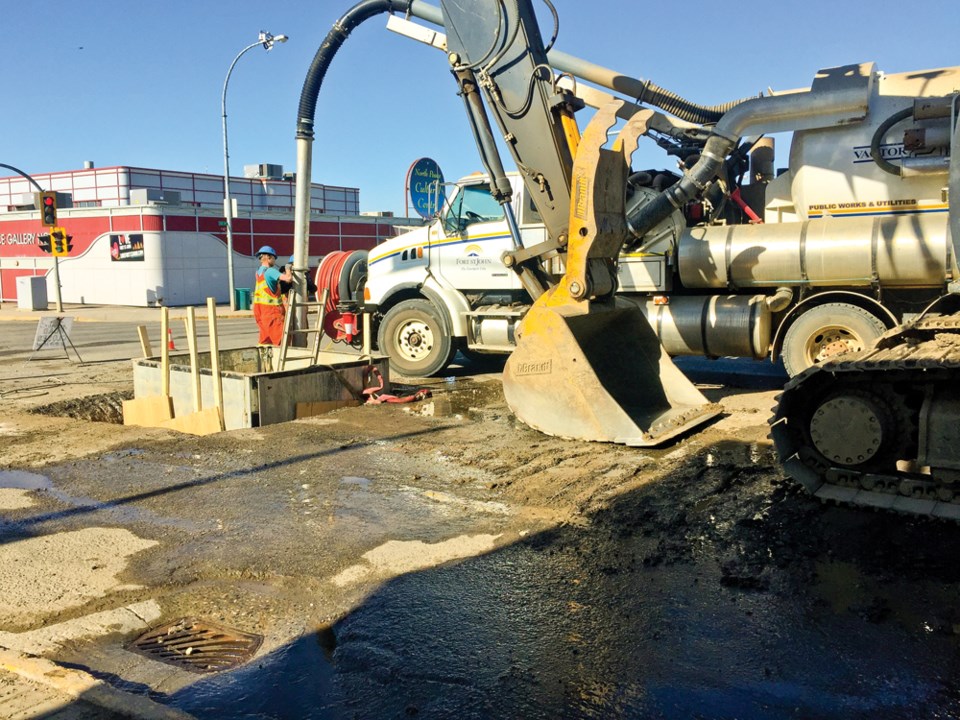 Ripping up 100 Street and starting construction of a new RCMP detachment makes up more than half of Fort St. John's proposed capital budget for 2020.

Council will get its first look at the draft $63.2 million budget on Monday afternoon.

The budget proposes to spend $8.5 million to kickstart the first phase of rebuilding 100 Street and replacing underground water and sewer lines installed in the 1940s and 1950s.

It also proposes spending $20 million on the planned new RCMP detachment, which the city hopes to break ground before the end of the year.

At the same time, the budget also proposes to spend another $320,000 in capital spending for renovations to the existing detachment, including a backup power generator, two new hot water boilers, a shower for officers testing dangerous drug chemicals, and parking lot upgrades to improve drainage.

The city largely relies on provincial monies under the Peace River Agreement for its capital spending, which compensates the city for industrial development in the region. The rest is funded by grants, development charges, reserves, federal gas tax funds, and borrowing for local area service projects, which is recouped through property taxes.

Here's a look at the spending proposed for 2020:

The budget proposes to spend $18.4 million on roads and related infrastructure.

The 100 Street rebuild takes the lion's share, but the city also has plans for spending $2.5 million to upgrade 96 Street between 114A Avenue to 119 Avenue, the gravel road through Kin Park north of Bert Ambrose School. The city plans to upgrade the road in two phases, upgrading the road to an urban standard, installing a sanitary sewer main, and installing pedestrian signals across Northern Lights Drive.

The city has earmarked $1.85 million to upgrade 92A Street from 87 Avenue to 94 Avenue, and replace both the storm sewer and water main.

The city also plans to spend $2.78 million on improvements to sections of 91 Avenue, 104 Street, 101 Street, and 111 Avenue, funded through local area service agreements with property owners.

There is $1 million in the budget for major maintenance and new road overlay.

The draft budget also calls for $31.1 million in spending on facilities and buildings.

Besides the RCMP detachment, the city has budgeted $2.6 million for its market plaza at Centennial Park, which is up from its last estimated cost of $1.4 million. The city has secured a $50,000 grant from the Northern Development Initiative Trust for the plaza project, and is awaiting word from the federal government as to whether it will receive an infrastructure grant that could fund up to 73% of eligible project costs.

The city plans to spend $1.3 million to buy a new expanded public works shop "that will fit the needs of our mechanics. Some renovations may be required."

The first phase of upgrades to the Woodlawn Cemetery is estimated to cost $1.25 million, including 400 plots, 24 "green burial" plots, columbaria, and a scattering garden.

The North Peace Arena is slated for $1.09 in spending TLC, including the installation of insulated metal cladding to cover existing concrete masonry and wood, replacement of the roof membrane, as well as door and lighting upgrades.

The city has set aside $1 million for Surerus and Kin Park upgrades, and another $750,000 on trail development.

The fire hall needs a $300,000 upgrade to fix groundwater that is pooling at the base of the building as well as interior damages caused by building movement; while the Pomeroy Sport Centre needs $555,000 in upgrades to lighting, refrigeration plant, and flooring.

The city has also earmarked $60,000 to partner with School District 60 on the rebuild of the soccer pitch at Bert Bowes school. "This project will signal the beginning of a long term recreational partnership," budget documents read.

The city has earmarked $3 million for special projects to be transferred to the city's operating budget.

The city plans to spend $365,000 on an economic development strategy tackling the proliferation of brownfield lots throughout the city and downtown, as well as a BC Hydro clean energy policy study. The funding for this line item includes contract funding for a project co-ordinator.

The city plans to spend $420,000 on a health and safety master plan and programs for city staff, including a new contract staff member to provide training to public works and community services staff.

The city plans to dump another $210,000 into the Resource Municipalities Coalition, another $160,000 for the final year of its agreement with UNBC's Community Development Institute office; and $75,000 to establish a community foundation.

The city plans to spend another $615,000 on various plans and strategies for tourism, arts and heritage, the fire hall, food security, affordable housing, and capital asset management.

It plans to dole out $150,000 for a "Winter City micro project plan," for various winter projects undertaken by the city, private business, or non-profits.

The city plans to spend half of its $6.09-million water and sewer budget in 2020 on upgrades to the sewage lift station, which is 22 years old and in need of corrosion repairs and capacity upgrades.

The city has budgeted $4.5 million for new equipment and machinery.

The city has earmarked more than $1 million for new IT infrastructure and software.

The city has also earmarked $32,000 on fire prevention public safety to tackle fire trends in the community. "We have a trend in kitchen fires involving new Canadians within our community. This would allow us to take the training to this group through public events, or their cultural based clubs and deliver kitchen safety training."

A full breakdown of the projects follows:

[Editor's Note: This article has been updated to correct the city's capital budget for 2020 is $63.2 million, not $54.7-million as earlier reported.]