The City of Fort St. John has secured federal gas tax funding for a multi-million dollar project to reclaim treated sewage water for industrial and agricultural uses. Of the $6.
Jul 5, 2016 10:57 AM By: Bronwyn Scott 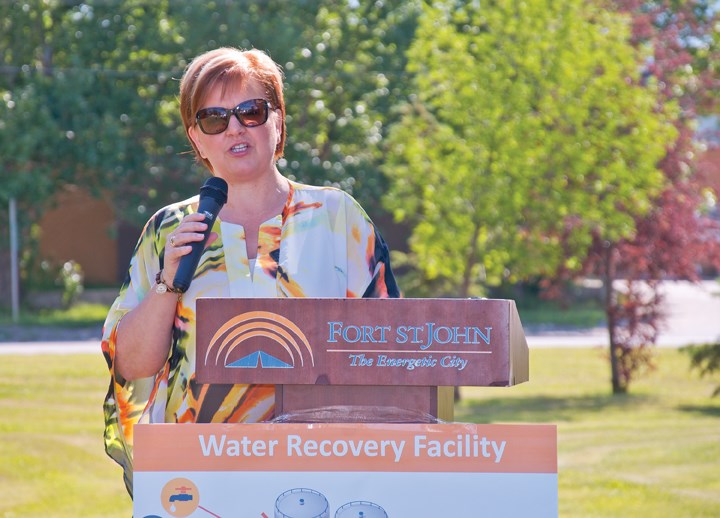 Fort St. John Mayor Lori Ackerman says a water recovery facility will treat effluent to be reused for industry and agriculture use. “This project supports industry by providing affordable water for their use and it supports our citizens by reducing the usage of treated water and extending the life of the city water treatment facility and related infrastructure," she says.Bronwyn Scott

Of the $6.5-million water recovery facility project, $5 million will come from the federal gas tax fund. The centre, to be located near the city’s south lagoons, would be similar to Dawson Creek’s reclaimed water facility.

Mayor Lori Ackerman and Pat Pimm, MLA for Peace River North, made the announcement Tuesday before a small group of dignitaries and media at the city’s existing water treatment plant.

The facility will treat city effluent to a standard clean enough for use by industry and some agriculture, and will be available at a fee lower than is currently paid for potable water.

It’ll be significant in that there will be some revenue from this as well they won’t be drawing from our potable water system for uses that they don’t have to use potable water for,” Ackerman added.

Currently the city pays between $270,000 and $280,000 each year to operate the high lift pumps that draw water from the Peace River. Rather than returning that water back to the environment after it’s been used and treated to the required standard, the new facility would use that water one more time – and garner revenue for the city.

“If we can decrease that cost (of lifting water from the Peace), that is a decrease in cost to our residents, to our taxpayers, and that’s the important aspect of these programs,” said Ackerman.

The gas tax grants are issued in partnership with the provincial government, and administered through the Union of BC Municipalities.

“On behalf of Premier Christy Clark and Minister Fassbender, Minister of Community, Sports and Cultural Development, it’s great to be here today. Today’s announcement represents significant investment in the infrastructure of the city of Fort St. John. Through construction of a resource recovery centre we’re supporting the community’s needs to provide new infrastructure that improves efforts to reuse the city’s waste water,” Pimm said.

“Through this fund we’re investing in capital projects that support the construction of a range of community infrastructure projects throughout the province. These projects have helped create jobs, and they’ve encouraged economic growth while at the same time protecting the environment.”

In January, the city learned it wouldn't receive gas tax funds for upgrades to the south lagoons, or for the development of a long-term water supply plan. The city was seeking $2.7 million to support those projects.

The city did receive $1.1-million in gas tax dollars in 2013 for its micro-hydro station in the Old Fort neighbourhood, which has been in operation since last fall and has the “ability to power up to 70 homes,” Ackerman told media.