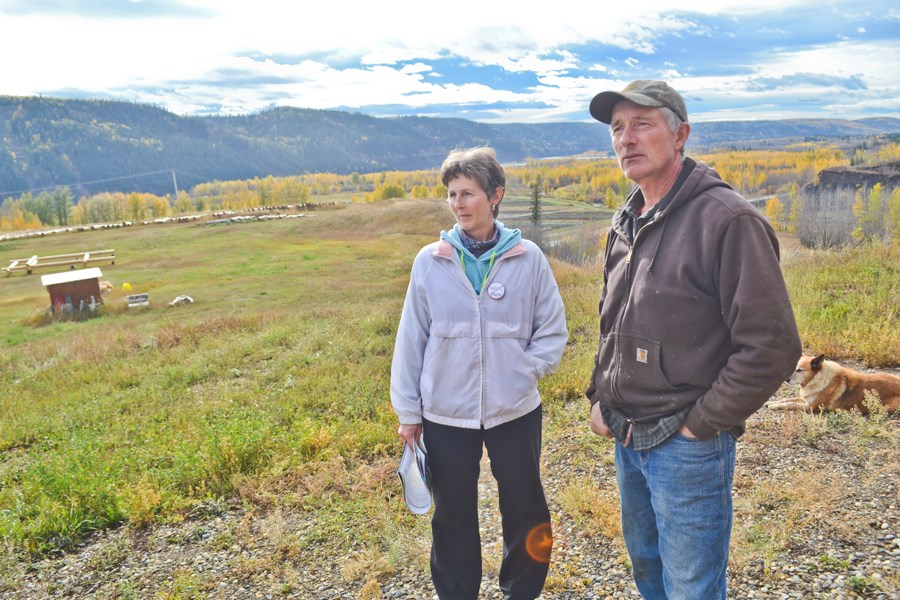 Driving south on Highway 29, you know you’re getting close to Ken and Arlene Boon’s property by the signage.

Some read “Site C sucks.” Others indicate where the Peace River’s flood reserve water would rise to if BC Hydro builds the long-debated hydroelectric dam – basically their front porch.

Another form of protest on their front yard is subtler: solar panels set up to soak in energy from the sun, displaying an alternative to hydroelectric power.

“Being involved in this fight as made us very energy-conscious,” said Ken, when asked if the panels are a reaction to BC Hydro. “As a byproduct of that, we got interested in solar, and I would have to admit a little bit of a protest against Site C and flooding the whole valley.”

He said the panels are easy to install, show them exactly how much power they’re using, and saves them money.

It’s easy to tell from the way Ken and Arlene talk about Site C that this is a fight they’ve been waging for a long time. They’ve got well-pat, ready-to-go arguments about why the proposed dam is a waste of time and money. They’re friendly people, but emphatic on this topic.

And they come by it honestly; Arlene’s grandfather also refused to discuss selling his land with BC Hydro some 50 years ago. They say this is the third round they’ve gone through with the Crown corporation.

The last two times, it was determined that the economic risk was too high. And the Boons don’t think that has changed at all.

Arlene’s grandfather bought the land they live on from the original homesteaders back in the 1940s, and acquired the surrounding land as it became available. He had horses and cattle and a little grain, then when he got older he went into sheep, converting the Bear Flats schoolhouse into a sheep pen.

Arlene was raised on the land, coming back in the late 1970s when her grandfather was moved into a care home. She’s raised two children here herself.

She and Ken now use the land to grow hay and build log homes. Down towards the river, across Highway 29, they lease more land to a market gardener who grows corn, cantaloupe and watermelon – produce that would be very difficult to grow elsewhere in the Peace, Arlene said.

The highway splitting their property is another conversation that the Boons feel hasn’t been talked about as much as it should. If the valley is flooded, that means another highway will have to be built. That cost has been rolled up into the $8 billion price tag of the dam.

On the other side of that highway, towards the river, is land designated as prime agricultural land in the Agricultural Land Reserve – class 1 through 3. Only 1.1 per cent of B.C.’s land base meets that standard.

“Nobody should be flooding lands in valley bottoms any more, because there are other ways of generating electricity and conserving it,” said Arlene. “But there’s only one way of growing food, and that’s in the soil that’s capable of doing it.”

Due to the dry weather conditions this past summer, a bee farmer in Montney was having problems with honey production, Arlene said. Nothing was flowering, and his bees were eating their honey rather than making more.

The Boons let him put his bees down on the flat, and he was able to extend his season.

“He would have had to pull his bees in,” said Arlene. “But because of the valley elevation and the heat units, it was still flowering down here.”

The Boons also run a business building log homes in their yard, which has prompted them to refurbish some of the original structures that were built there. They still live in the house her grandfather built, but even that isn’t the oldest building on their property.

One of the barns of the original homesteaders is still in the same spot, looking worse for wear, but nevertheless still standing.

The old Bear Flats schoolhouse now serves as a separate home for Arlene’s mother to live in, and an old post office from Hudson’s Hope is their guesthouse.

They have a small personal museum made out of the old Jim Watson house, the abode of a homesteader who raised a family on the west end of Bear Flats. Hydro ended up with his property.

“They were just going to burn the building down, so we ended up acquiring it, and moved it here,” said Ken. “We had to put in some new logs, and put in a new floor and roof.”

Inside can be found all kinds of homesteader history: saddles, tools, pictures, instruments, arrowheads. All of the things that were there before Arlene and Ken were here, and even some from before her grandfather arrived.

One of those items is a school reader signed twice by Phyllis Freer, one of the girls who attended the Bear Flats schoolhouse. She signed it once as a pupil when she was a little girl, then came back in 2004 and signed it again.

Arlene said she gave the reader to Blanche Dot, a daughter of one of the original homesteaders, when she visited a decade ago.

“She happened to open it to a poem that was in here, and she started reading it, and then she just finished reciting it without looking,” said Arlene. “I can’t imagine the memories that must have been going through her mind when she was sitting here in her school when she was 10 or 11, and reading her school reader.”

Ken admitted that the thread of Site C has made him carefully consider doing any kind of development on the land.

“It takes a toll on people,” he said. “When you drive that post in the ground or pour concrete, you’re always thinking, ‘Man, are we just wasting time here doing anything?’ And you know I guess worst-case scenario they’ll compensate, but it’s not the same.”

Ken said they don’t intend on selling the property, ever. They’re not interested in making money.

Arlene agreed. “People say, ‘Well, you’ll get a million dollars.’ I don’t want to be a millionaire. I want to be a landowner on my grandpa’s land, and live here forever.

“That’s what’s priceless to me, is being here, not having lots of money in my pocket and wandering around somewhere aimlessly looking for a place. This is home, and it can’t get any better than that.”