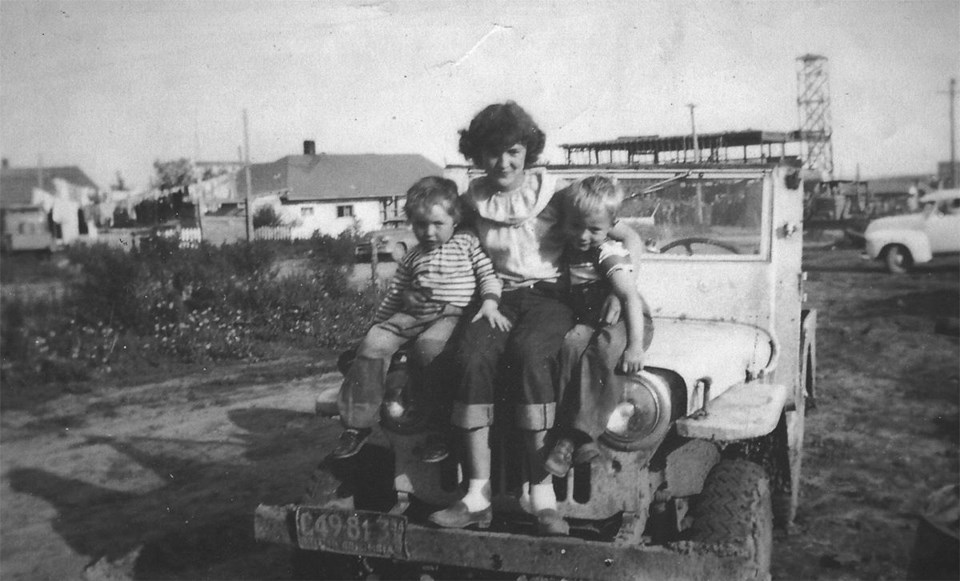 I didn’t have much to do with the Post Office until I was about 11 years old and met John Langlet. His Dad was Postmaster and they lived above the Post Office in a two bedroom suite. Kenny and I thought this was the best thing since sliced bread and used to play all over the building with John, from the basement to the top floor! Of course there were areas that were off limit to us and we never ventured into them, we liked our skin too much to do that. In the years that we hung around with John we spent many evenings playing hide and seek in the building.

When I was a teenager one of my chores was to pick up the mail after school. As my friends had the same chore we usually wound up doing it together. The odd time that we forgot our key (every kid who picked up mail had a key), Mrs. Schubert or one of the other Post Office ladies would give us our mail. Our box number was 856 from the day it opened in 1955 until door-to-door mail started in the mid-1970s. The following story from the Ma Murray files is a detailed account of the beginning of the new Post Office.

A good deal of concern had been felt around Fort St. John that no dirt had been flying on the new post office site. Mr. George M. Murray, who represented the Cariboo (Fort St. John riding at the time) riding in Ottawa, had the assurances of the department that it would only be a matter of days until the work would be in the process of action. By that date the plans had all been drawn up and accepted by the Postal Department. The federal Public Works had the job of drawing them up. The property, a corner double lot, had been acquired and paid for and this had been cleared away of buildings and debris for the operation. The work had not yet started on actual construction, however, and patience was wearing down. It beat all, it seemed, how slow it was to get government projects started.

In 1949, the plea was carried by Murray for Fort St. John. Mr. Murray got the wheels turning and the money granted in 1950 for a new post office here. Then in June of 1950, the Korean War broke out and all public buildings were cancelled. By 1952, when the request was again taken up and $80,000 was granted, a site was in debate. The Postal Department tried to buy the Mager corner and then the Brooks corner but, unable to close a deal, they settled for a secondary street corner opposite Moore Equipment. By this time a new picture of the town was emerging. A gas and potential oil field had been discovered and some 500 settlers moved in. The amount of cash for construction had to be raised. In 1952, $268,000 was voted for the new post office building here.

1953 was a Federal election year and with George Murray out, a lot of political news pushed other local considerations off the pages of the Alaska Highway News. However, on August 27, 1953, the front page story proclaimed: A start would be made at once on the Fort St. John site and motor cars, tractors and machinery would be removed so that bulldozers could move in for the big basement construction. Construction would be in time to hook in with the new water supply provided for the town by the Government of Canada.

“It would be a joy for me to recall that I was able to negotiate at Ottawa for both the new building and for bountiful civic water supply,” Mr. Murray stated.

He feared the only trouble with the new building was that the architects had not made it large enough. By mid-November the report from contractors Bennett & White was that they seem to have a ring of horseshoes strung around their two big projects. The post office building was all closed in with brown canvas and the forms were all in. The cold weather would not stop this work and there were no hold-backs with regard to help or materials for the building. There must have been some delays though as the plaque on the Fort St. John Post Office wall states that the building was erected in 1955.

Nearly everyone in the old days had climbed those steps on the corner of the post office building at one time or another to post a letter. They might have also climbed the stairs inside as the top floor once housed the RCMP offices and later the Unemployment Insurance Commission and Canada Manpower office.