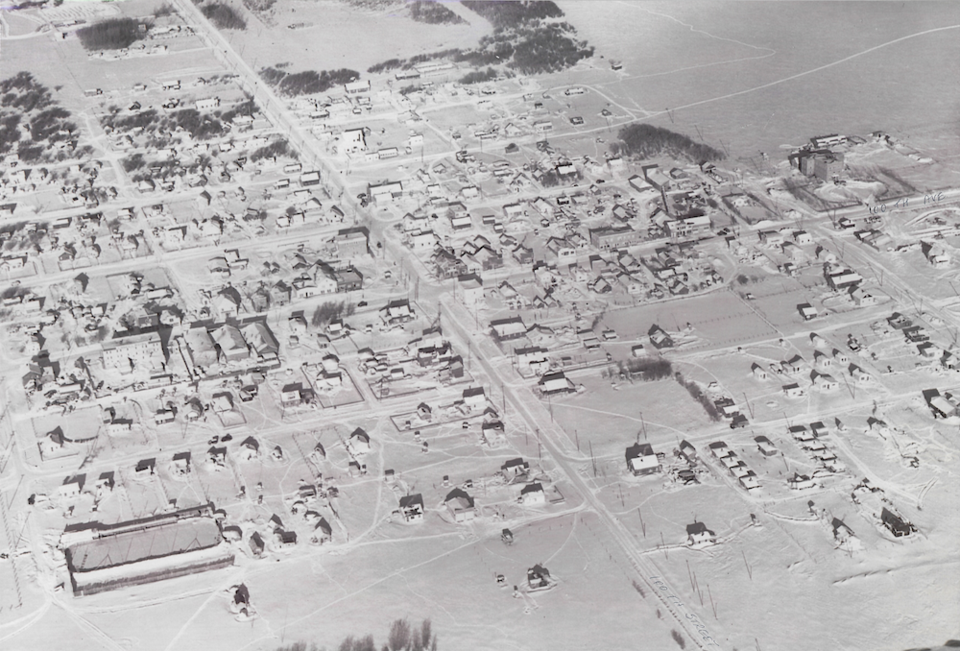 The Village of Fort St. John a few years after incorporation. For reference, the Providence Hospital is located in the upper right of the photo.Larry Evans

In 1947 the Board of Trade, which was the forerunner of the Chamber of Commerce, commissioned the creation of a film called 'The Land Beyond The Peace'. The film was created by local cinematographer Rudy Schubert and crew. It was a masterpiece of promoting Fort St. John! That same year there was a force on the move to have Fort St. John incorporated to a Village. So coincidence or not the film of 1947 and Fort St. John becoming a Village may have some connection. Following is a story written by Ma Murray in relation to the Incorporation of Fort St. John.

The incorporation of the Village of Fort St. John started in July 1946, when Vern McLeod, early manager of the Canadian Imperial Bank of Commerce, was President of the Board of Trade. Fort St. John was beginning to feel greatly the growing pains of post-war progress. The Alaska Highway had been taken over in March of that year by the Canadian Army. The big job of taking over some $15 million worth of old worn out equipment was handed over from the Americans to Canada. The quota of new machinery which had been denied everyone during the war years was removed. The farm industry of Canada, which had suffered neglect because of this quota, was pushing hard for more and more equipment.

Fort St. John was entirely drained of the American generosity it had enjoyed. Now, with the heat off cement and other requisites, people who had earned good money on construction were digging in with new improvements. Cement was still at a premium, but by July it was easing and some 25 new septic tanks were built at $1000 each. Dr. G.N. Cormack, who was the first doctor here, was getting his new practice under way and water was being delivered in barrels and tanks for those few who had storage facilities. It was proposed at the Board of Trade meeting on July 7 that if these 25 builders would agree to buy 25 bonds under a village set-up, THIS would get the ball rolling. Dr. Cormack, who's eagle eye watched the health of the hamlet with great concern, bounced the announcement at this meeting. Dr. Cormack was fresh from High Prairie where he had seen such a desire fulfilled. It didn't take him long to sell the idea of an incorporated village to the 40 board members who gathered in the Red Cross hut. A committee was drawn up. Dr. Cormack headed it and other members were Bob Duncan of Canadian Utilities, Ken Coleman, Larry Schauweker, and Margaret “Ma” Murray of the Alaska Highway News. They soon had maps made of the boundaries of the proposed village and distributed to local businesses.

The Kamloops Land Registry office compiled a list of the property owners within the confines and the list came back with only 176 property owners entitled to vote. Each property owner put his lot and block number on the foolscap page and signed their name, the majority was in favour of incorporating. The town was buzzing with excitement and anticipation. However, incorporation couldn't begin until the government sent a representative.

Finally on April 24, 1947, D.R. Weldon from Victoria came to Fort St. John to discuss with the traders the incorporated demands. A public meeting was held on May 15 and the hall was hardly big enough. Feelings ran high as many were worried about taxes being raised. With over 100 in attendance they voted in favour of incorporating. The letters patent were signed by Ralph Pomeroy, Ken Dodds, and Margaret Murray. An election was planned for October 8.

Harry Mason was the clerk, Margaret Murray and Hal Roche were deputies at this first election. 114 cast votes, with 82 voting for incorporating, 22 voted it down and there were 10 spoiled ballots. The clerk proudly declared incorporation. By the time the smoke cleared it was too late for a civic election. With permission from Victoria, three councillors were appointed pro-term to carry on until 1948 when a proper election could be called. They were Hal E. Roche, Ralph Pomeroy, Robin L. Pickell.

Incorporation was the baby of the Board of Trade. Conceived and nurtured by the parent body, the new village and its problems cluttered up every board meeting. Vern McLeod was replaced by Dr. Cormack as president. Those who wanted the new village took space in the newspaper and plugged for the objectives they most desired; plumbing, disposal of sewage, street lights, sidewalks, fire fighting equipment, and so on.

The government announced it would give the village a liquor store and no longer would they have to go to Pouce Coupe for their liquor. The hospital had a small fire, which prompted the request for a proper water system for the village. PGE was looking at an extension to the Peace. Survey parties were scattered all over the country with seismograph outfits, prospecting for oil. The Hart Highway was crawling over the mountains, cutting 24 hours off the travel time from Fort St. John to Vancouver. The Alaska Highway News was in this year advocating a secession from B.C., and the Fort St. John voice was loud in its threats. If we were in this Pacific Province, Victoria better know it!

By November 1947, Harry Mason had been hired as Clerk for the Village of Fort St. John. The job carried with it a small salary and rent for Harry's office. This was the first town hall. It was said to the credit of Harry Mason that he listened, got advice that he acted on, and did a fine job of getting things started. Two miles of sidewalks had been donated by the war assets that year, and some of them had been laid. There was a first school by-law for six new schools to be built.

The year 1948 loomed ahead like bright star and the Village of Fort St. John went ahead with a great program. However the water mains and the sewage pipers were not laid.

The point that Margaret L. Murray wanted to make was to never underestimate the good a Board of Trade (Chamber of Commerce) can do!