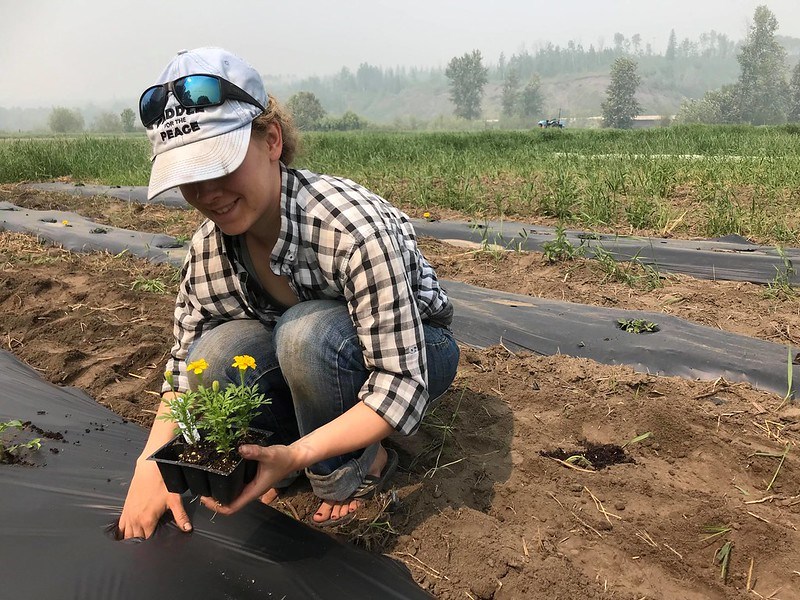 Thirty years ago, "the world's most frustrated recyclers" founded the Northern Environmental Action Team (NEAT) to help the people of Fort St. John figure out how to keep more of their household waste out of the landfill.Province of B.C.

This information was provided by the Ministry of Social Development and Poverty Reduction:

Thirty years ago, "the world's most frustrated recyclers" founded the Northern Environmental Action Team (NEAT) to help the people of Fort St. John figure out how to keep more of their household waste out of the landfill.

Modern-day NEAT no longer has to play that role, as the regional district took that work over when the region's first solid-waste plan was introduced in 2017.

But NEAT's neat work carries on in new ways now that the community non-profit has been freed up to turn its attention to all the other passion projects that it had going on the side - most especially around food security.

"A key priority for government is making sure British Columbians have access to sufficient, safe and nutritious food," said Nicholas Simons, Minister of Social Development and Poverty Reduction. "NEAT is working hard to heighten awareness in communities about the importance of food security, while connecting people to healthy and sustainable food sources."

Food security is a critical need in addressing poverty, notes Karen Mason-Bennett, executive director, NEAT. NEAT partners with the Salvation Army in Fort St. John to divert surplus foods that would otherwise be headed for the landfill, getting them into people's households instead.

But food security is also an economic issue in the region. Grain crops thrive in the area - the region produces 90% of the canola grown in B.C. - but are under threat, as climate change brings more rainfall.

NEAT's Northern Co-Hort (Collaborative Horticulture) program is bringing producers and other community members together to further develop permaculture farming around the vast region and test the viability of commercial vegetable production, which Mason-Bennett said "is not economically to scale" in the region.

Selling at the region's farmers markets is one thing, she noted, but serving a grocery store, school system or hospital is another thing entirely.

"How do these producers get credit? How do we make this economically viable? What does the soil look like in each of our micro climates around the region, and what will grow best there? These are all things we're exploring. We're trying to develop the business case, and look at things like transportation infrastructure and economies of scale."

The COVID-19 pandemic has been a catalyst for community social service agencies to introduce virtual services. In February, NEAT debuted its first virtual conference for kids, Energy Explorers, which brought together 500 students from grades 5 to 8 to learn from experts on all sides of the energy issue. That's a hot topic around Fort St. John, where the Site C dam project has just been given the green light and municipal government is committed to green energy solutions.

During spring break and summer holidays, NEAT offers Camp Wildlings, a popular outdoor "kid-led" camp attended by 300 or so young people a year from kindergarten to Grade 6. The children go fishing, wander the woods, build base camps, pick edible berries, spot animals and learn to appreciate and connect to the environment along the way.

"We see kids transform in those camps," Mason-Bennett said. "We've had parents tell us they wish their kids' teachers could see them at those camps, because the kids feel that responsibility and relationship when they enter this space."

The Job Creation Partnership (JCP) project funded by the Ministry of Social Development and Poverty Reduction has been integral in helping NEAT pivot from a recycling organization to the multi-service agency it is today, she said.

Funding through four JCPs has enabled NEAT to hire people for a period of work experience and set them to the task of feeling out a new program area or strengthening an existing one. The work of putting up 5,000 jars of jam last year for the Salvation Army food bank wouldn't have been possible without a JCP, Mason-Bennett noted. The Northern Co-Hort program also got its start as a JCP initiative.

"That funding has allowed us to hire people to get our feet under us in a new project, to look at the reality versus the dream," she said. "From there, we can develop a plan to find grants to sustain the work."

What's the dream for the organization? "A healthy, vibrant, connected community making positive, sustainable decisions. We like to talk about building a NEAT future!"

The B.C. government has proclaimed March as Community Social Services Awareness Month in appreciation of the 42,000-plus people who work in the community social services sector. They provide help and assistance to those who need it most.