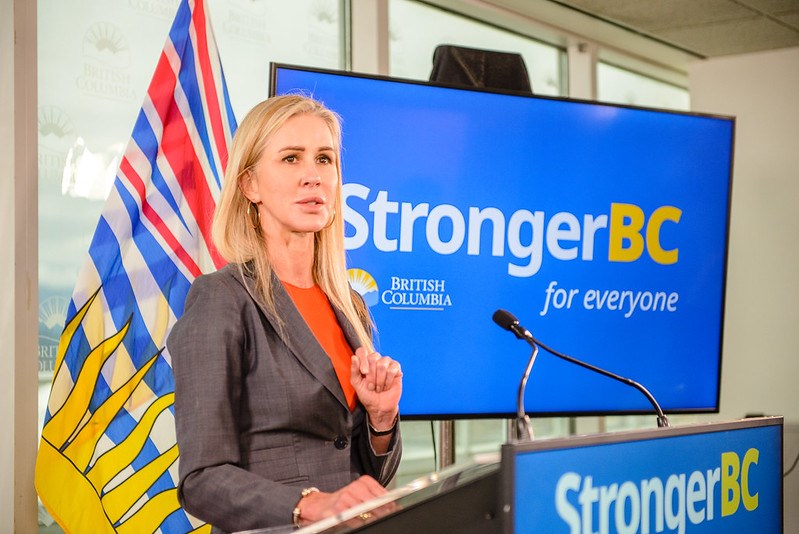 Shell Canada President Susannah Pierce speaks during an announcement of a new clean energy innovation centre to be created in B.C., July 16, 2021.Province of BC

Shell Canada and the B.C. and federal governments are kicking in a total of $105 million to create a new clean energy innovation hub and accelerator in the province.

The new B.C. Centre for Innovation and Clean Energy will provide support for companies in clean energy, with priority sectors being:

Shell Canada, the B.C. government and federal government is each committing $35 million to set up the new accelerator and incubator. Scheduled for launch this fall, it will be a member-based, non-profit corporation that operates independent of government.

Premier John Horgan said addressing climate change and moving away from fossil fuels is “the challenge of our time.”

“British Columbia has already becomes a destination for clean, low-carbon technologies and we want to build on that,” Horgan said.

Susannah Pierce, Shell Canada’s new president, said Shell has committed to a net zero emissions target by 2050. One of its key investments is in carbon capture and storage.

Earlier this week, Shell announced plans to build a second carbon capture and storage plant at the Scotford heavy oil upgrader complex near Edmonton. Shell Canada already operates the Quest project. Since 2015, it has captured and sequestered 5 million tonnes of CO2 . The second CCS project will capture CO2 from the production of hydrogen.

Carla Qualtrough, federal minister of Employment, Workforce Development and Disability Inclusion, said the participation of companies like Shell are critical in the transition from fossil fuels.

“Shell’s participation is equally essential, not just because it’s been setting the pace for the oil and gas sector for years, or because of its experience with clean technology … but because its employees of all of our oil and gas workers across the country will be critical to achieving our climate goals.

“They are the engineers, the scientists and the trades people who know how to build energy infrastructure. And they are the same people who will build our renewables.”

Pierce said B.C. has a policy and regulatory framework that makes it a logical location for a new clean energy incubator and hub.

"You've got CleanBC -- pretty clear targets, as does Shell have clear targets -- you've got regulatory policies which can also be an enabler, such as low carbon fuel standard, you have a carbon tax. So again, we see an opportunioty to really focus on collaboration here in B.C.