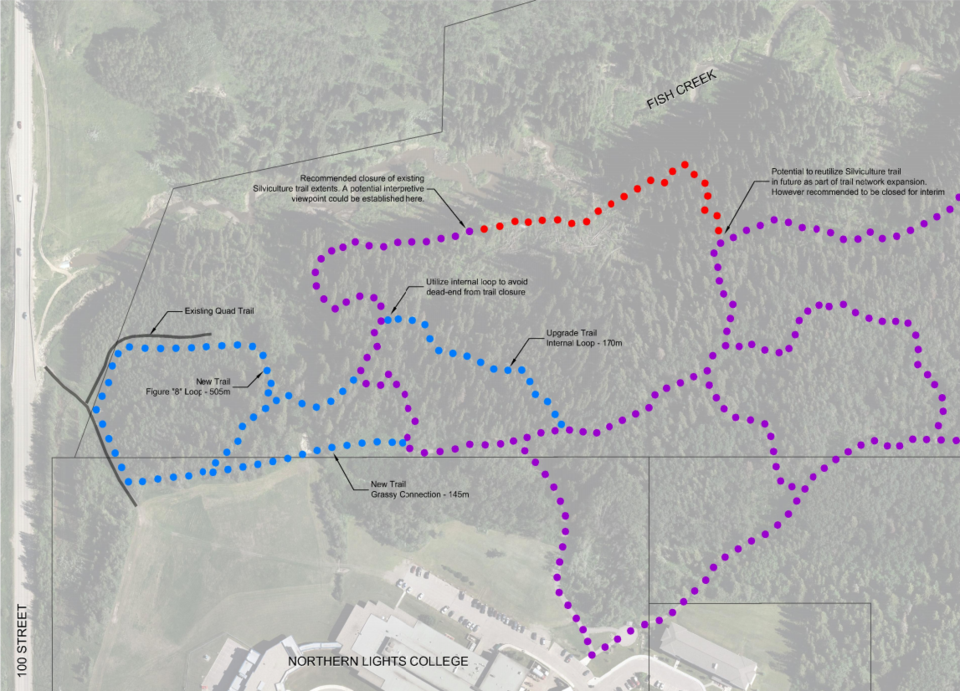 A study found there would be little impact to wildlife to develop new trails to replace a section of the Silviculture Trail washed out by a storm in June 2016.

"The trail development project in Fish Creek would have minimal impact on the forest wildlife habitat observed on site due to the low impact work activities being proposed onsite," city grounds director Robin Langille wrote in a report to council.

Langille has proposed several options for new trails on the west end of the forest, including a new 505-metre loop that would connect with an existing, undamaged section of the Silviculture Trail, and continuing west to 100 Street before looping back to Northern Lights College.

Other options include upgrading a 170-metre loop between undamaged sections of the Silviculture Trail, or adding a new 145-metre trail through a grassy stretch of land north of Northern Lights College.

Council ordered the wildlife study in February before deciding whether to proceed with developing any new trails.

Though the wildlife study, carried out by Roy Northern Environmental, didn't identify any sensitive wildlife or habitat, there remains the potential for animals to live in the project area, Langille noted.

The study found the forest is home to habitat for Black-throated Green Warbler, Connecticut Warbler, and slender penstemon, all species at risk, though none were observed during the assessment. If any work begins before August 15, a bird survey will be carried out to identify and limit any risks to birds and their nesting sites, Langille noted.

The city, along with its engineering consultants at Urban Systems, have committed to minimizing tree falling for developing the new trails, Langille wrote.

"Instead, limbs will be removed from standing trees to allow for the trail to be established while retaining as many mature trees as possible and most of the work will be conducted on foot and by hand, limiting the usage of heavy equipment to conduct the proposed works," he wrote.

The new trails are estimated to cost $170,000, and Fish Creek would see a net increase of 390 metres added to the trail network.

Fixing the damage to the Silviculture Trail could cost between $2 million to $3 million.

The city has earmarked $750,000 for trail development in 2019, money that's expected to come from gas tax grants.