No plans for city handgun ban 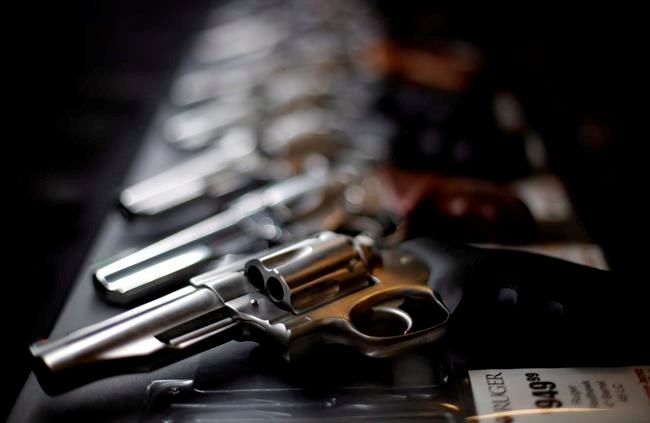 In this photo taken Friday, Dec. 21, 2018, handguns for sale are lined up in a display case at Frontier Justice in Lee's Summit, Mo. THE CANADIAN PRESS/AP-Charlie Riedel

The federal government is giving municipalities extraordinary new powers to ban handguns through bylaws restricting their possession, storage and transportation.

The Liberals said Tuesday the measures under Bill C-21 would be backed up with serious penalties to enforce these bylaws, including jail time for people who violate municipal rules.

Under the plan, firearms licence holders would have to comply with handgun storage and transport restrictions in municipalities that pass bylaws.

Such bylaws could forbid keeping handguns at home, meaning they would have to be stored at a licensed business, or they might go further by outlawing handguns anywhere in a municipality.

“It’s a strange provision because it’s really a federal jurisdictional matter,” Zimmer said. “Some might discount bylaws as you can’t water your lawn after 6 p.m. This is a bylaw that’s going to have the ability, if it’s not done properly, to have your licence revoked, and the full force of the federal government if you don’t abide by that municipal bylaw.”

Zimmer said the legislation will lead to an inconsistent set of laws between communities that will impact lawful gun owners more than criminals perpetrating gun violence. Rules could end up different beween Grande Prairie and Valleyview, or Fort St. John and Dawson Creek, he said.

“Criminals will not follow handgun bans. They’re not going to all of a sudden start to obey," said Zimmer. “Lawful firearms owners once again are the target. A lawful handgun user goes to the range, has gone there for years legally, and now because of a simple bylaw change he’s no longer allowed to do what he’s always done."

When asked if Fort St. John planned to implement or study a handgun ban, Mayor Lori Ackerman said “no.”

“The laws as they are cover the Municipality and I am not a fan of duplication of effort,” Ackerman said.

As far as gun crime and violence goes, there’s very little of it in Fort St. John.

The majority of those — 13 — were for unsafe storage, as well as two files each for pointing a firearm and careless use of a firearm. There was one file for discharging a firearm with intent, and none for robbery with a firearm.

“[Fort St. John] does not experience notable levels of firearm driven crime,” said Insp. Tony Hanson, detachment commander of the Fort St. John RCMP. “Most violent person on person crime with a weapon involves a blade or blunt object rather than a firearm.”

By comparison, there were 83 assaults with weapon or causing bodily harm, and eight robbery files in 2020, according to statistics. A full report on last year’s crime trends is planned to be presented to council in March.

Meanwhile, the Liberals are also proposing a buyback of a wide array of recently banned firearms the government considers assault-style weapons. Owners could turn in their guns for compensation but would also be able to keep them under strict conditions, including registration and secure storage of the firearms in question.

Under the rules, these guns could not be legally used, transported, sold, transferred or bequeathed by individuals in Canada.

They would become "virtually useless as a firearm," Public Safety Minister Bill Blair said at a news conference, calling the federal plan "overwhelmingly the most effective way" to remove the outlawed guns from society.

The buyback program could cost up to $400 million. Zimmer said that money would be better spent on more resources to stop gun smuggling.

“That’s going to have a real effect on the streets of Toronto and other urban centres,” Zimmer said.

“It’s irresponsible to spend putting layer upon layer on lawful owners and not putting money and government resources to tackle the real problem of illegal firearms in Canada.”

The government has faced pressure from gun control advocates to make the buyback mandatory similar to programs in Australia and New Zealand.

Suzanne Laplante-Edward, whose daughter Anne-Marie was killed in the Ecole Polytechnique shooting massacre in 1989, said the optional buyback was a betrayal.

"My family and I have fought for three decades to ban these weapons," she said. "We thought we had won in the fall of 2019 when the Liberals announced with much pomp and circumstance that they would ban and buy back all of these killing machines. They lied to us. They lied to Canadians."

Asked if the optional buyback was a calculation intended to ease opposition from the gun lobby, Prime Minister Justin Trudeau said, "Obviously, there are political elements in this. But the core of why we are doing this, the core of why Canadians want this done, is to keep our communities safe."

The Canadian Coalition for Firearm Rights dismissed the bill as simple electioneering that uses licensed gun owners as fodder to mobilize the Liberal party's base.

"Reasonable Canadians should ask themselves if they think that anything in this bill will stop the shootings in downtown Toronto or Vancouver or the violence or property crime we see in rural communities."