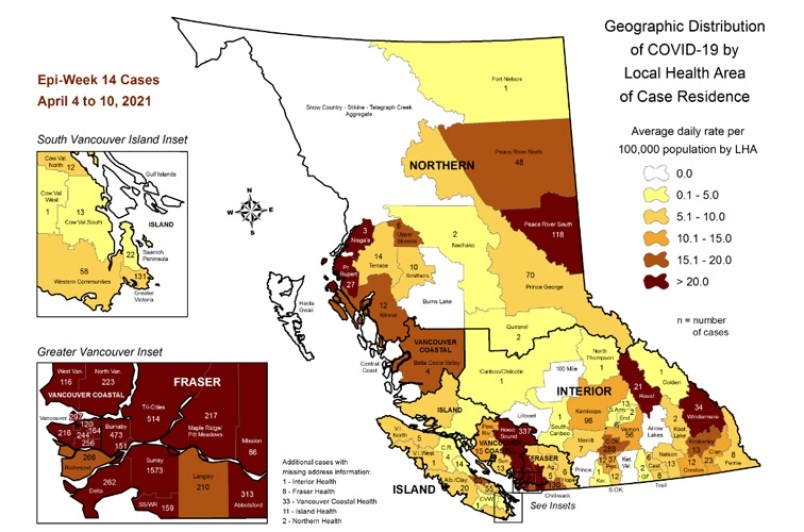 The vaccination campaign in the Northern Health region has had an impact, reducing cases in the northwest, provincial health officer Dr. Bonnie Henry said on Thursday.

Whole-community vaccination campaigns in places like Prince Rupert have been effective in reducing cases in those communities, she said.

"We have had high rates (of infection) across the North for some time, and those are starting to come down," Henry said. "We've see a transition in the north from the northwest to the northeast. And, partly, that is because of our vaccination campaign there."

Between April 2 and April 8, the Northwest health service delivery area saw 86 new cases of COVID-19, compared with 174 in the Northeast. The Northern Interior health service area, which includes Prince George, had 65 cases, according to information released by the B.C. Centre for Disease Control.

Northern Health is now booking vaccination appointments for people aged 64 and up (Indigenous people 18 and up). In addition, those aged 50 and up can register online to be notified when they will be elgible for an appointment.

In addition to the Northern Health vaccination campaign, using the Pfizer and Moderna vaccines, the AstraZeneca vaccine was available for those aged 55 to 65 at local pharmacies. For pharmacy locations and information on how to book an appointment, go online to www.bcpharmacy.ca/resource-centre/covid-19/vaccination-locations.

On Thursday, the province saw 1,205 new cases of COVID-19, including 66 in the Northern Health region, Henry said.

"The largest and steepest increase has been in younger people," Henry said. "(And) we've seen an increase of people 40 to 59 who have ended up in hospital. (But) deaths are pretty much concentrated in the older age groups."

The number of British Columbians hospitalized with COVID-19 rose to 409, with 125 of those in critical care. Of those hospitalized, 25 were in the Northern Health region, including 10 people in intensive care.

The majority of new COVID cases in the province are now strains considered variants of concern, primarily the B117 strain from the U.K. and the Brazilian P1 variant, she said.

With the dramatic increase in cases, it is becoming harder to track exactly where each new case was exposed, she said.

As of Thursday, nearly 1.24 million doses of COVID-19 vaccine have been administered in the province, including 63,332 in the Northern Health region.