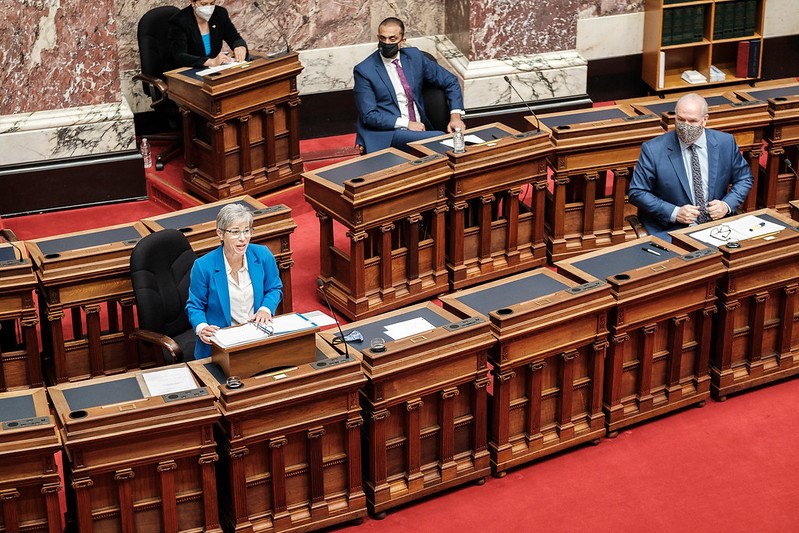 Finance Minister Selina Robinson presents the 2021 Budget on April 20, 2021.Province of BC via Flickr

There were no special announcements for the northeast in the latest B.C. budget, and local municipalities will be in for a tough fight over what little new money has been included for urgent needs like addictions recovery.

The budget released April 20 includes $13 billion in new spending and a $9.7 billion deficit, with the provincial debt ballooning from $102 billion this year to $127 billion by 2023.

“There’s no optimism for a post-Covid province. When you look at the budget they announced they’re looking at up to almost 10 years of deficits,” said Peace River South MLA Mike Bernier, also the provincial Opposition finance critic.

“Having that kind of debt with no plan of how you repay it is one of the challenges in the budget.”

"We’re still challenging the government to explain that," Bernier said. "Why are they making cuts at a time now when we need it more than ever? You look at the situation in the Peace region, North and South Peace, with the shortage of doctors, nurses, specialists, and front line staff. The last thing we need to see right now is a cut in any budget."

No major infrastructure projects for the northeast was included in the budget — nothing new for the Taylor Bridge — and which also slashes capital spending in the Ministry of Transportation down from $5.3 billion to $3.5 billion.

“Since the NDP have gotten into power, there has been nothing new announced for major infrastructure in our area. Nothing,” Bernier said. “The only things that are going on is finishing off projects that were already funded and started when we were in government.”

Included with the budget was $500 million over three years to expand mental health and addictions services, including 195 new treatment and recovery beds. It’s a small start for a massive problem, Bernier said, but there are 200 municipalities and regional districts in B.C.

“You could build all of them in downtown Vancouver and not even touch the problem. So what does that mean for places like Fort St. John and Dawson Creek?” Bernier said.

“Per capita we still have a huge number of opioid deaths in our region. We have people in their bedrooms at home suffering going through addictions. We need supports for those people.”

Budget documents note BC Hydro had spent $6.45 billion on Site C as of the end of 2020. Bernier noted the budget also makes no reference to the $100 million Rural Dividend grant, which supported municipalities with their infrastructure programs.

“If I was a municipality I would be asking some pretty pointed questions about why that’s not in there,” Bernier said.

The budget includes some $800 million in supports or foregone revenue for businesses affected by the pandemic, but Peace River North MLA Dan Davies said the budget delays rolling out those supports, particularly for restaurants that have had to close indoor dining. Some restaurants in Fort St. John are struggling to access what grants have already been made available, Davies said.

“No new money, no new supports for the restaurant industry that has already been brought to its knees across our province,” Davies said in the Legislature on Monday. “This business grant program has so many barriers in place that make it nearly impossible.”

Both Davies and Bernier raised concerns that public sector job growth is far outpacing gains in the private sector. Much of the new spending is being absorbed into ministries and growing the bureaucracy, Bernier said.

“There's almost 60,000 new government employees in this budget hired,” he said. “Meanwhile we have almost 50,000 non-union, private sector people who are unemployed with nothing in this budget to help them.”

Bernier said his focus as finance critic is not challenging the government on its short-term deficits, but it’s long-term lack of vision to get out of deficit spending.

“That should scare the heck out of people. What message is that sending to the oil and gas sector, forestry, mining, our major employers?” he said. “Well this government is basically walking away from the job creators and saying, yeah, we don’t see the province getting any better, so we’re going to have to keep spending for 10 years.”

Davies said the provincial budget had been ballooning prior to the pandemic, and even as the province added nearly two dozen new taxes, including taxes on soda and Netflix. There are no new tax exemptions for businesses or entrepreneurs in the budget, but the government is offering tax exemptions on electric bike purchases.

“We cannot tax our way out of this, but this government is trying … By the time this government is finished, there will be an additional $10,000 per person of additional debt in British Columbia. That's going to be owed by, again, not only us — not even my kids, probably not even my great-grandkids. That's looking at just what it looks like today.”