Plane in crash near Taylor linked to B.C. construction company 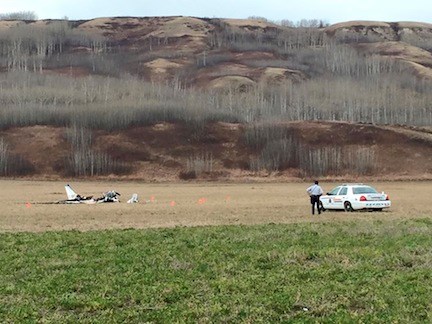 A lone RCMP officer keeps watch over the scene of a fatal plane crash at the Chapman Sand and Gravel pit Saturday afternoon. The pit is located on a flat above the Peace River near Taylor. Matt Preprost Photo

Aviation investigators have landed in Fort St. John and are en route to the scene of a fatal plane crash near Taylor Friday afternoon, but federal records show the plane was registered to a corporate air services company linked to a B.C. construction company with operations in the Peace.

It's still unknown who was on board the Cessna 207 plane when it crashed on a grass strip at the Chapman Sand and Gravel pit around 4 p.m. RCMP have confirmed two men were killed.

Transport Canada records show the plane -- identified by the tail mark C-GNVZ -- was registered to Chapman Corporate Air Services Ltd., out of Calgary. The pit appears to be owned and operated by LB Chapman Construction Ltd., based in Vernon, and which operates in the Peace Region. A plane with the same tail marking can be seen in a photograph on LB Chapman's website.

Officials with LB Chapman could not be immediately reached for comment. It's not known whether the two men were employees of the company.

Plane may have crashed during takeoff

On Saturday afternoon, a lone RCMP officer kept watch over the crash scene, on a flat above the Peace River.

Fort St. John RCMP Insp. Mike Kurvers said the scene was still intact and awaiting investigators with the Transportation Safety Board and the BC Coroners Service to comb through the wreckage and retrieve the bodies of the two men.

Chris Krepski, a spokesperson for the Transportation Safety Board, said initial information indicates the plane crashed on takeoff. Krepski said investigators need to find out why the plane was taking off, and determine the nature of the flight, including the plane's flight plans, what type of maintenance had been done on the aircraft, and any communication with aircraft services nearby.

This is a developing story. More details will be provided as they become available.