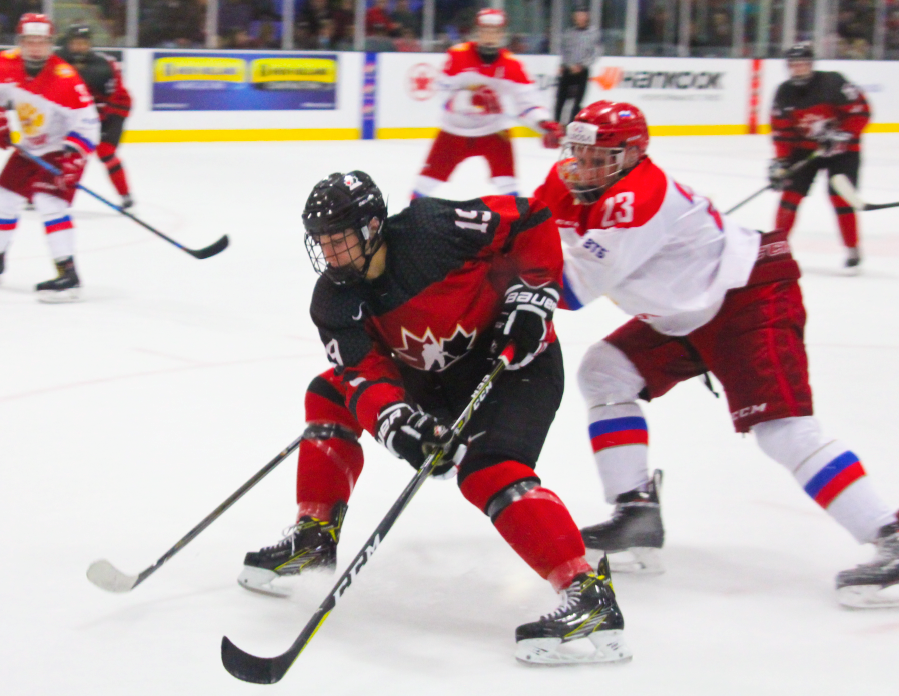 Dylan Cozens of Canada Red battles it out with Ilia Mironov during the the 2017 World Under-17 Hockey Challenge in Fort St. John.Dillon Giancola

The Peace River Regional District has voted to draft a new bylaw that would fund future Hockey Canada events in the region.

The bylaw would need to go to referendum for approval as it would levy taxes to support the events, and its drafting was narrowly supported at Thursday’s meeting by a 7-5 vote.

"This Hockey Canada phenomenon that has developed over the last 10 years in the region, and certainly for us with the Encana Event Centre, has been one I take a lot of pride in," Bumstead said.

"It’s built what I believe is a strong regional approach to bring residents together and bringing a segment of tourism into our community and region."

The 2015 World Under-17 Hockey Challenge contributed $6 million in spending in the region and B.C., while the 2017 tournament generated $5.05 million in economic activity locally and across Canada. Combined, the two events brought tens of thousands of fans out to games, and raised around $200,000 in legacy funds for local groups.

Bumstead garnered support for the motion from Tumbler Ridge Mayor Keith Bertrand and Hudson’s Hope Mayor Dave Heiberg. While both said they initially struggled with the idea, they said the success of previous events were evident in their communities.

“Hockey is Canada’s game. It brings together so many people, even if you’re not a fan of the game it still can bring a community together,” Bertrand said.

“Seeing the impact in Tumbler Ridge of having those young professionals stay and interact with the kids for the week that they were there, but also continue that relationship throughout the tournament, giving high fives to the Tumbler kids as they’re going out on the ice — the impact it does for young kids is incredible."

Heiberg said the move would benefit the many good young hockey players in the region.

“To have the opportunity for them to see something like this, of this calibre, within reachable distance is something that I think in terms of aspirations for these players is something we need to consider," Heiberg said.

Taylor Mayor Rob Fraser echoed the sentiments, noting his community saw the benefit when players met with elementary students to talk about hockey and the importance of sport and physical fitness. Any impact to taxpayers would be small, he said.

“The taxpayers that I’ve spoke to have said yeah, they’d like to support something like that. They see the effects that it brings to the region,” Fraser said.

Fort St. John Mayor Lori Ackerman said she could not support the move, and noted that local municipalities have already been contributing to the events as partners and sponsors.

Creating a new bylaw to raise taxes and fund a single sport was a “slippery slope,” she said, noting the region’s many recreation needs, updated soccer facilities and a pool replacement among them.

“I just remind everyone what our job is as local government, which is water and sewer and roads, etcetera,” Ackerman said.

“These are wants rather than needs and costs are going up, and I am just amazed that we would be going down this path when partnerships and sponsorships are available for each event, and we have never said no to these things.”

“I can’t look my taxpayers in the face and say to them, I’m going to tax you for this, I’m going to create special function for this,” Ackerman said.

Electoral Directors Brad Sperling and Dan Rose said they couldn’t support it either, noting many other urgent needs including expanded fire protection in Chetwynd, continued funding STARS air ambulance, and healthcare scholarships, some which would also need to go to referendum.

“All things that are going to add up to a bill at the bottom of the page. We’re liable to kill them all if we keeping adding on to it,” said Rose. “I’m worried about necessities versus wants.”

Taxpayers’ pockets are only so deep, Sperling said, and noted his concerns that voters may be fatigued by so many referendums for new services and taxes.

“When I look at the infrastructure and the things I’ve got to do in my area over the next couple years, I am afraid we are going to lose it all. So it’s a matter of prioritizing,” Sperling said.

Chetwynd Mayor Allen Courtoreille said previous tournaments have been moving ceremonies for residents of all ages and race involved.

“I only have one vote and my vote is that it’s good for us,” he said.

“I struggle with the politics sometimes of saying maybe it’s a few cents, maybe it’s a few dollars to each and every taxpayer. But when it becomes inclusive to everybody, that we have happiness, or stating that we are moving toward that, in a position that we’re in as leaders, we must lead in that way.”

“It’s a great thing. You speak to any chief, this is a good day,” he said.